UTair Aviation (Russian: ОАО «Авиакомпания «ЮТэйр») (MCX: UTAR) is a Russian airline with its head office at Khanty-Mansiysk Airport[3] while its main base is at Roshchino International Airport near Tyumen. It operates scheduled domestic and some international passenger services, scheduled helicopter services as well as extensive charter flights with fixed-wing aircraft and helicopters in support of the oil and gas industry across Western Siberia.

In February 1967, the Aeroflot Tyumen Directorate was set up in order to meet the transport requirements of the fast-growing oil and gas industry undergoing development in Western Siberia. In the wake of the break-up of the Aeroflot organization, Tyumenaviatrans Aviation (TAT) was formed in 1991 to replace the Aeroflot Tyumen Directorate. TAT adopted the name of UTair in early 2003. The airline is owned by Khanty Mansiysk District administration (23%), Surgut City administration (19%), Russian shareholders and companies (33%), the Russian Federation (2%), and private foreign investors (20%).

In November 2014, UTair faced financial difficulties and was unable to make a bond payment.[8] In April 2015, UTair announced it was to severely cut down their fleet by 44 aircraft due to their ongoing financial struggle.[9] It also cancelled its order for 24 Sukhoi Superjet 100 aircraft.[10] A few weeks later, the regional airline subsidiary UTair Express ceased operations.[11]

In December 2015, it has been confirmed that UTair Aviation sold its leisure subsidiary Azur Air to Turkish tourism company Anex Tourism Group, which also bought UTair-Ukraine a few weeks earlier.[12]

UTair Aviation as head company of the UTair Group has significant stakeholdings in the following companies:[13]

Utair Aviation has codeshare agreements with the following airlines (as of July 2014): 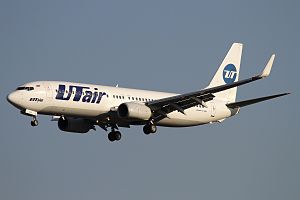 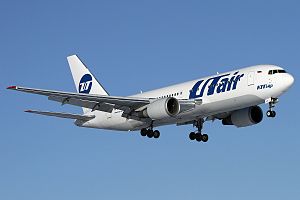 As of November 2015, the UTair Aviation mainline fleet consists of the following aircraft - excluding all helicopters and subsidiaries:[1][15]