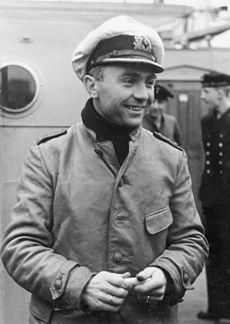 The film begins shortly after the outbreak of World War II when Günther Prien reports to the Befehlshaber der U-Boote (BdU—supreme commander of the U-boat Arm) Karl Dönitz. Dönitz orders Prien as commander of U-47 to penetrate the Royal Navy's primary base at Scapa Flow to inflict as much damage as possible. Prien accomplishes his mission and receives a hero's welcome on his return.[1][2]

Following these events, pastor Kille, a former schoolmate of Prien, approaches Prien in the need for help. Kille offers refuge to victims of Nazi oppression. Prien initially declines, stating he is a soldier and not involved in politics. The attempt by Kille's sister Alwine, who is engaged to Prien's first officer Thomas Birkeneck, also fails to convince Prien.[2]

With the ever increasing intensity of war Prien is plagued by his bad conscience, asking himself if his attitude is correct. A very dramatic incident occurs following the sinking of a freighter. U-47 rescues two shipwrecked. These turn out to be German refugees who are trying to escape from Nazi Germany. The two chose to remain at sea over the prospect of returning to Germany.[2]

Prien finally believes, that as a figure of public interest, that he could influence and change something for the better. He goes to visit the imprisoned pastor Kille. Prien promises him help, not realizing that their conversation is overheard. Thus Prien himself gets into the focus of the Gestapo, the Secret State Police.[2][3]

The visit remains without consequences for Prien. U-47 is sunk on his next war patrol. Prien and his cook (Der Smut) are rescued by a British ship, which is then sunk by another German submarine under the command of Prien's former first officer, Birkeneck. Prien's hat is retrieved from the sea putting Birkeneck in a state of shock. Subsequently he fails to give the order to dive on time and his boat is sunk by attacking enemy aircraft.[2]

The story is loosely based on Prien's combat record and command of submarine U-47. His most famous exploit was the sinking of the British battleship HMS Royal Oak at anchor in the Home Fleet's anchorage in Scapa Flow.[4] His achievements as U-boat commander were highly idolized by Joseph Goebbels' Ministry of Public Enlightenment and Propaganda.[5]

Every character depicted in the film, except for Prien and Admiral Dönitz, who is not mentioned by name in the film, is fictitious. Prien's portrayal as an active member of the German resistance is also fictitious. U-47's destruction and Prien's death is another invention of the movie makers.[2] To date, there is no official record of what happened to the U-47 or her 45 crewmen.[6][7] The submarine shown in the film was the Spanish submarine G-7, formerly the German submarine U-573.[8]