Ukrainian Defense Industry (Ukrainian: Укроборонпром, Ukroboronprom) is an association of multi-product enterprises in various sectors of the defense industry of Ukraine.

The concern includes enterprises, which operate in the development, manufacture, sale, repair, modernization and disposal of weapons, military and special equipment and ammunition, and participating in military-technical cooperation with foreign states.

The feasibility of combining in a single management structure of scientific, experimental, industrial enterprises and special exporters is supported by the positive effect [source?], that the concern has shown during its existence. Formation of “Ukroboronprom” made available organization of an innovation cycle "research - development - serial production - consumption (sales) - service - utilization".

To ensure optimal decision-making in different fields the State Concern uses a concept of divisional management structure. The concept was adopted taking into account current trends in theory and practice of management. Its essence is to separate strategic and operational objectives from industry operational problems management. Divisional principle is to provide administrative and economic "autonomy" of industries, delegation of administrative powers of heads of divisions.

Concern has the functions of strategic planning, interaction with public authorities and coordination with divisions. This approach will allow top management of Concern to focus on strategic decisions and long-term programs of the defense industry.

The main goal of “Ukroboronprom” is the efficient management of Ukrainian military industrial sector and improvement of the effectiveness of the enterprises that are parts of State Concern.

As a separate divisions stand those, that are authorized to conduct import\export operations with military equipment and wares that hold National Security information. These enterprises conduct international sales of equipment produced by Ukrainian military industrial sector and post-sales service of equipment, maintenance and modernization.

At the end-year 2014 “Ukroboronprom” fulfilled all government contracts by 100%. During the second half of year 2014 the enterprises of the Concern created more than 2000 jobs and 13 more enterprises became profitable. Moreover, over the second half of the year wage arrears to employees totaling to 45 million UAH. were overtaken. In 2015 “Ukroboronprom” expects to create 3000 more job opportunities.

The concern produced 3468 units of weapons and military equipment over 11 months in 2015. Managed by its new Director Roman Romanov, Ukroboronprom increased its production by several times and started to systematically provide Ukraine's Armed Forces with newest weaponry.

The conglomerate was established in 2010 in place of the existing "Armored Equipment of Ukraine" (1999) and "Technological Military Service".[3][4][5][6] Initially it consisted of seven major state companies:

According to the company itself, China and India are a traditional market for Ukrainian military products.[7] In 2013, the Brazilian Navy announced a potential partnership with Ukroboronprom.[10]

In March 2014, during the 2014 Crimean crisis, the company barred all exports of weaponry and military equipment to Russia.[11] Yuriy Tereshchenko, the then newly appointed head of the company, stated on 29 March 2014: "With its act of aggression, Russia had broken the regular order of life".[12] Tereshchenko also claimed: "There are some types of weapons that Russia cannot make without Ukraine’s components. Among them are aviation radars and beam holders for some types of missiles. This is a long list, not one, two or three items”.[7] Jane's Information Group believed (on 31 March 2014) that while supply may be slowed by the Ukrainian embargo, it was unlikely to do any real damage to Russia's military.[11] 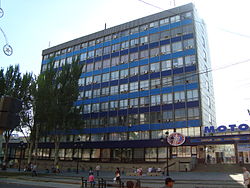 In January 2015 the executive director Roman Romanov announced that “Ukroboromprom” plans to increase the production of T-84 Oplot from 5 to 40 tanks. In 2016 it is planned to produce 100-120 tanks per year.

By the end of January 2015 the management of “Ukroboronprom” and design bureau “Pivdenne” signed a contract on the cooperation on space technologies and import substitution.

On February 5, 2015 “Ukroboronprom” announced the beginning of development of the reform and advancement of the military industrial sector program planned until year 2020.

This year the Concern increased production of arms and military equipment by 36 times. Most of the weapons, 1767 units, are the latest models developed or modernized by Ukroboronprom. Ukroboronprom enterprises modernized 10 military aircraft units, supplied 1135 guided missiles and high-precision bombs and 243 units of rocket artillery. 1701 units of military equipment were repaired.

Ukroboronprom is actively involved in international cooperation. An imports substitution program Made in Ukraine is now being introduced.

Minister Cabinet of Ukraine has excluded the state enterprise Antonov from the State Aircraft Building Concern Antonov and included it into Ukroboronprom by a decree of March 31, 2015.

Over the period of 9 months of year 2015 the enterprises of “Ukroboromprom” have supplied Ukrainian army with record-setting 2019 pieces of military equipment: 688 brand new vehicles and 1331 recovered and modernized. Among it, 406 pieces of rocket and missile artillery and 35 aircraft vehicles.

Best inventions of Ukrainian students are being embodied. Scientists of the Kyiv Polytechnic Institute have created a UAV. Students of other universities are actively involved in apprenticeship on the leading enterprises of Ukroboronprom.

On September 22, 2015 at the international exhibition "Arms and Security-2015" in Kiev "Ukroboronprom" agreed on cooperation with the American company «Textron» in the production of heavy armored vehicles. It was also agreed on cooperation between the state enterprise “Antonov” and Polish company “WB Electronics”. Ukraine will use the technology of the Polish company to develop a new tactical unmanned aviation complex for the Armed Forces.

In one of the largest Asian international defense exhibitions “Defense & Security-2015” "Ukroboronprom" signed a framework agreement with an enterprise authorized by the Ministry of Defence of Thailand on the production of modern Ukrainian BTR-3E1 in the kingdom. Parties are to organize the assembly and production of armored vehicles and various modifications on its base.

On October 9, 2015 "Ukrspetsexport", which is part of the "Ukroboronprom", signed an agreement on cooperation in the aviation sector with "Kazakhstan Aviation Industry". Cooperation includes the organization at the Aviation Technical Center LLP "KAI" (Astana) service center for maintenance and repair of "Antonov" aircraft and industrial cooperation in the manufacture of components for these aircraft. The parties also agreed on the development and production of civil and military drones and supply, repair and maintenance of aircraft training simulators.

On November 12, 2015, at the International Aviation Salon Dubai Air Show, "Antonov" and the company Taqnia Aeronautics signed two memoranda on cooperation in advancing to the market of Saudi Arabia 4 sanitary AN-148-100, 4 reconnaissance and rescue variants of the An-132 and 2 aircraft-based jamming devices.

On November 19, 2015 "Factory 410 CA", which is part of the Concern, has signed a new contract with the air forces of Egypt. The enterprise is to adapt three aircraft An-74 to the countries requirements.

In addition, Ukraine has successfully fulfilled a contract with India for 400 million dollars. "Factory 410 CA" made a major overhaul and re-equipment of modernized military transport aircraft An-32RE.

According to forecasts, the total export contracts concluded by the "Ukroboronprom" in 2015 will be worth almost $1 billion. Concern is also cooperating with NATO. The Alliance is considering the possibility of participation of the equipment developed in Ukraine in the naval exercises. Concern is actively working on bringing Ukrainian defense products to NATO standards. A separate unit within the Concern, which consists of 8 companies, participated in a working group on NATO Codification AS-135 and obtained access to NATO database online.

Ukrainian Shield, a new Ukroboronprom project, provides high-tech manufacturing, defense investment and equipping the army with modern types of armaments. General Director of Concern Roman Romanov presented it at Reform of Ukroboronprom International Forum and the new possibilities of cooperation on November 26, 2015.

The key aspects of the program are import substitution, production optimization and balancing the labor forces. Concern enterprises are to get high-tech equipment and to focus on the production of modern weapons and military equipment according to the international standards.

Currently a bill is being drafted that will allow Ukroboronprom to create joint ventures with Western partners. This will give the green light for global companies to directly invest in the Ukrainian economy and create the conditions for a rapid development of the domestic defense industry.