The party had an anti-corruption and pro-European platform.

Legally[clarification needed][citation needed] it is the successor of Political Party "European Capital" (Ukrainian: Політична партія „Європейська столиця“) which was registered in March 2005.[1] In its last outing the party was founded on April 24, 2010, on the basis of the Vitali Klitschko Bloc (Ukrainian: Блок Віталія Кличка), a local political alliance in Kiev (the capital of Ukraine).[4][20]

UDAR had "observer status" in the European People's Party.[14]

The Political Party "European Capital" was registered in March 2005 (its party-leader was Ukrainian businessman Lev Partshaladze[24][25]) and the party gained 0.04% of the votes during the Ukrainian parliamentary elections 2006; the party did not participate in the 2007 Ukrainian parliamentary elections.[1] In February 2009[citation needed] the party renamed itself Political Party "New Country".[not in citation given][1][26] Lev Partshaladze was elected into the Kiev City Council for the Vitali Klitschko Bloc in 2008, but expelled from the faction, for repeatedly voting differently from the faction, on December 2, 2010.[25][27][nb 1]

The Vitali Klitschko Bloc were two local political coalitions in the Capital of Ukraine, Kiev who contended in two local elections there. On December 10, 2005 the parties PORA and Reforms and Order Party agreed to create a bloc "Civic party" PORA-ROP " that would contend in the March 26, 2006 Kiev city council elections.[29] The bloc was led by Vitali Klitschko a Ukrainian professional boxer and current WBC heavyweight champion and became Bloc Vitali Klitschko "PORA-ROP" which won 14 seats in the 2006 election.[29] Klitschko thus is a deputy of the Kiev City Council since April 2006[30] The bloc felt apart very soon after the election.[29] During the simultaneous elections for Mayor of Kiev, Klitschko received 26 percent of votes.[31]

During the 2008 Kiev local election the Vitali Klitschko Bloc was a combination of the parties People's Movement of Ukraine, Political Party "European Capital" and "Ukrainian Social Democrats" and it won 10.61% of the votes and 15 seats in the Kiev City Council.[32] During the simultaneously held elections for Mayor of Kiev Klitschko received 17.9 percent of votes.[33]

14 October 2008 Vitali Klitschko announced that participation of his bloc in the next Ukrainian parliamentary election was possible.[34] He added that a decision on the participation in the race will be definitely taken by the entire political team making up the Bloc of Klitschko, not by him personally.[35] A possible candidate to run with the Vitali Klitschko Bloc in an electoral bloc was the European Party of Ukraine.[35][36]

On a party congress, held on 24 April 2010, the Political Party "New Country" (founded in 2005 as Political Party "European Capital and renamed into "New Country" 14 months before April 2010[1][26]) renamed itself into Ukrainian Democratic Alliance for Reform and elected boxer Vitali Klitschko as its leader.[26][37] The party officially became Ukrainian Democratic Alliance for Reform (UDAR) of Vitali Klitschko mid-July 2010.[38]

During the 2010 Ukrainian local elections the party won about 400 representatives in municipalities and Oblast Councils (regional parliaments).[39][40][41][42] 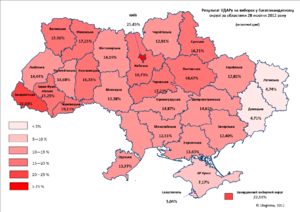 Results in the 2012 elections

In September 2011 party leader Klitschko stated that the party was considering the possibility of merging with other political parties before contending in the 2012 Ukrainian parliamentary elections.[45] In December 2011 UDAR of Vitali Klitschko and Civil Position where negotiating a unification.[46] But Civil Position eventionally joined Batkivshchyna during these elections.[47]

UDAR became a partner of the Christian Democratic Union of Germany in November 2011.[48] Udar is supported by the German government and the Konrad Adenauer Foundation[49][50] and received support in particular from Angela Merkel and also politicians from the conservative European People's Party. According to information gained by the German magazine DER SPIEGEL, the target was to "set up Klitschko purposefully as a new strong man in Kiew - in order to counter this way the Kremlin's growing influence". Support consisted in logistics, training and joint performances. Assistance was also promised by Christoph Heusgen, Ronald Pofalla and Guido Westerwelle.[51]

UDAR did not join the Dictatorship Resistance Committee; but on 22 January 2012 it did sign an agreement on joint actions with that alliance.[52]

Starting in March 2010 the party's popularity in opinion polls reached a level almost twice as high as the election threshold (which was raised to 5% in November 2011[53]).[54][55][39][56][57][58] The election list of the party was a mixture of candidates who used to represent parties from all over the political spectrum of Ukraine.[59]

After a successful application the European People's Party started on 5 April 2012 the process of making UDAR a observer member of the organization.[60]

In July 2012 party leader Klychko stated that his party would not cooperate with the Party of Regions in a new parliament.[61]

Early August 2012 the party complained its candidates for people's deputies (and all other parties not involved in the first Azarov Government) suffered "psychological and physical pressure" and this "ten times higher then other parties".[62]

In May 2013 UDAR, Batkivshchyna and Svoboda vowed to coordinate their actions during the 2015 Ukrainian presidential election.[70]

Party leader Klitschko confirmed on 28 February 2014 that he would take part in the 2014 Ukrainian presidential election(, this also ended the May 2013 agreement to coordinate with Batkivshchyna and Svoboda).[71] But on 29 March 2014 announced that he had changed his mind and would run for the post of Mayor of Kiev in the 2014 Kiev local election (including Mayoral elections) set for 25 May 2014.[72][73] In the 2014 Ukrainian presidential election Klitschko endorsed the candidacy of Petro Poroshenko.[74] Klitschko won Kiev's mayoral elections with almost 57% of the votes.[75][76] Poroshenko was elected President of Ukraine on 25 May 2014.[77] Klitschko was sworn in as Mayor on 5 June 2014.[78] The same day the Ukrainian parliament had deprived Klitschko of his MP mandate (Ukrainian MPs are not entitled to combine parliamentary activities with any other public employment).[79] Hence Vitaliy Kovalchuk was elected to lead the party's faction in parliament on 7 June 2014.[80]

Merge into the Petro Poroshenko Bloc

UDAR tends to avoid sensitive and polarising subjects and focuses instead on popular topics, such as more empowerment to ordinary Ukrainians and a ruthless campaign against corruption, the indifference of the authorities, the lack of local governance, inequality, and poverty.[82][83][84] The party wants to "unleash the power of the state and provide conditions for welfare".[85]

The party is in favor of the Association Agreement between Ukraine and the European Union (EU).[86] It has made no stance on a possible NATO membership of Ukraine.[85]

UDAR wants to overcome social inequality with "the abandonment of the idea of cheap labor".[85]

In education, the party wants to bring education in Ukraine to "European standards" by "development of external testing and monitoring the quality of education".[85] UDAR wants to return to a 12-year compulsory secondary education with specialized training in the last two classes and three cycles of learning in higher education – bachelor's degree, master's degree and postgraduate.[85] It also wants to guarantee autonomy of educational institutions by legislation.[85]

The party wants to combat corruption in Ukraine with more transparency and the creation of an independent anti-corruption agency.[84][85]

UDAR wants to reduce the number of state agencies in order "to minimize the interaction of the citizen with an official".[85] And it wants to simplify procedures for registering property.[85] It wants to reduce the number of taxes from 23 to 7 and to generally simplify the taxing system.[84][85] "Owners of the land for agricultural purposes" should only be citizens of Ukraine.[85]

UDAR wants to abolish the privileges of the Chairman of the Verkhovna Rada (Ukraine's parliament) and former Presidents of Ukraine[87] and to reduce benefits for current parliamentarians.[88]

The party has pledged to "reboot" the court system, and "reinforce the control of the public over elections".[84]

The party wants to simplify procedures for the establishment and registration of public and charitable organizations.[85]

In June 2013, the party's parliamentary faction voted for the denunciation of the 2010 Ukrainian–Russian Naval Base for Natural Gas treaty.[nb 3][90]