During the breakup of the Soviet Union, significant portions of the Soviet Naval Aviation were based in Ukraine, which were intended to support the Black Sea Fleet. These forces included the 2nd Guards Maritime Missile Aviation Division (Gvardeyskoye, Crimean Oblast), with three regiments of maritime attack Tu-22M2s (5th, 124th at Gvardeskoye, Crimean Oblast and the 943rd at Oktyabrskoye?), and the 30th independent Maritime Reconnaissance Aviation Regiment (Saki-Novofedorovka, Crimean Oblast) of Tu-22Ps.[1]

In the second half of 1997, when Ukraine and Russia finally agreed on how to split the Black Fleet, Ukraine received 12 planes and 30 helicopters, including Su-33s[clarification needed] and some Su-25UTG [2]

Ukraine inherited large naval aviation units from the Soviet Union. These included powerful weapons such as the Tupolev Tu-142 and Tupolev Tu-22M, however these were scrapped under the Budapest Memorandum. Fighter such as the Mig-29 were either decommissioned due to budgetary reasons or transferred to the air force. The remaining inventory included transport, attack, and anti-submarine warfare helicopters, as well as numerous transport aircraft. Ukraine's naval units, along with some aviation units participated in several deployments such as Operation Atlanta and Operation Ocean Shield.[3]

During the Russian occupation of Crimea, Ukrainian naval aviation managed to get a number of its aircraft and helicopters airborne from its Novofedorivka airbase to fly to bases in mainland Ukraine on 5 March. This included one Kamov Ka-27PL and three Mil Mi-14PL maritime helicopters, and one Beriev Be-12 amphibian and two Antonov An-26 transports. More than a dozen aircraft and helicopters, which were undergoing maintenance, had to be left behind. The long-term sustainability of the Ukrainian Navy's surviving helicopters is uncertain after the pro-Russian administration in Crimea nationalised all state owned enterprises, including the Sevastopol Aviation Enterprise, which had provided long-term maintenance and overhaul of the service's helicopters.[4]

All the naval aircraft in service are controlled by the 10th Saky Naval Air Brigade, which includes both fixed and rotary wing squadrons.

One of the Kamov Ka-27 helicopters is stationed on the Hetman Sahaidachnyi (a Krivak III-class frigate). The frigate can however carry a maximum of two helicopters. 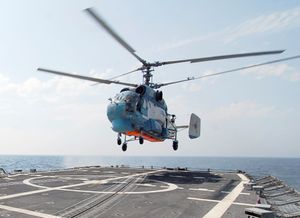