From Infogalactic: the planetary knowledge core
Jump to: navigation, search
This article is about the government of the National State of Ukraine (1918–1920). For the Cossack State of the 17-18th centuries, see Cossack Hetmanate.

Ukrainian State (Ukrainian: Українська держава, Ukrayinska Derzhava) (sometimes also called The Hetmanate (Ukrainian: Гетьманат, Hetmanat)) was an anti-socialist government that existed on most of territory of Ukraine (except for West Ukraine) from 29 April 1918[1] till December 1918.[2] It was installed after the socialist-leaning Central Council of the Ukrainian People's Republic was dispersed on 28 April 1918. Ukraine turned into a provisional dictatorship of Hetman of Ukraine Pavlo Skoropadskyi, who outlawed all socialist oriented political parties, creating an anti-Bolshevik front. It collapsed in December 1918, when Skoropadskyi was deposed and the Ukrainian People's Republic returned to power in the form of the Directorate.[2][3]

The establishment of the Ukrainian State led to unification of most of Ukraine in its contemporary borders, disbanding all Soviet quasi states sanctioned by the Bolshevik Petrograd such as the Odessa Soviet Republic, Donetsk-Krivoi Rog Soviet Republic and others. More assertive foreign policy and military support from the Central Powers saw some improved stabilization within the country.[1][3]

The collaborationist country lay in the Eastern Europe along the mid and lower stream of the Dnieper on the coast of Black and Azov Seas. The Ukrainian State covered most of the territory of modern-day contemporary Ukraine—less West Ukraine and the Crimea. Its territory however extended into today's Russia, Belarus, Moldova and Poland.

To its northeast Ukraine established a preliminary demarcation line with the Russian SFSR, on the east it had a border with the Don Republic, to its south were both the Black Sea and the Sea of Azov, while the Crimean peninsula—the Crimean Regional Government—came under the control of Sulkevych. To the southwest along Dniester lay a border with Romania, to the west Ukraine bordered with the German Empire and with Austria-Hungary. To the north were the German-occupied territories of Ober Ost and the Belarusian National Administration. 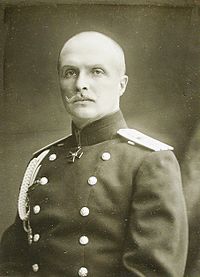 As a result of the Bolshevik aggression, the government of the Ukrainian People's Republic that initially pursued anti-military policy sought a military support after the capital of Ukraine Kiev was sacked on January 9, 1918 by Mikhail Muravyov. On February 9, 1918 Ukraine signed the Treaty of Brest-Litovsk with the coalition of Central Powers and in March 1918 all Bolshevik forces of the Russian SFSR were eliminated from the territory of Ukraine. The Army Group "Kiev" was created in order to protect Ukraine from further Bolshevik aggression and headed by the German Field Marshal Hermann von Eichhorn.

On April 25, 1918, the administration of Army Group "Kiev" suspected the government of Vsevolod Holubovych in kidnapping of the chairman of the Foreign Trade Bank in Kiev Abram Dobry. Through that bank the German occupational forces were officially conducting all financial operations with the Reichsbank. Next day Field Marshal von Einhorn issued a decree, according to which all criminal cases on the territory of Ukraine could selectively fall under jurisdiction of the German Field-Military Court along with the Ukrainian Court System. At the next session of the Central Council on April 29 Holubovych stated:

On the same day, April 29, 1918 a party congress of bread producers consisting of some 6,000 delegates from all eight guberniyas of Ukraine was taking place[1] in the building of the Kiev Circus. Skoropadsky after receiving information about the situation at the congress from his couriers later arrived in his car to the event where he was elected the Hetman of Ukraine. After that all participants moved to the Sofiyivska Ploshcha (Sophia Square) where Skoropadsky was blessed to the title by the Vicar of Kiev and Galicia Nykodym (Metropolitan Vladimir was executed by Bolsheviks). At night from April 29–30, 1918 the Hetman supporters took over government building of military and internal affairs as well as the State Bank. On April 30, 1918 the elite and most loyal formation of the Central Council, the Sich Riflemen, was disarmed.

Skoropadskyi issued his manifesto (hramota) "To the All-Ukrainian Nation" and the Law of the Provisional State System.[4] Desiring stability, the Austro-Hungarian and German forces welcomed the coup; Skoropadskyi co-operated with them, making him unpopular among many Ukrainian peasants. The new state retained the tryzub (coat of arms) and the national colors, but reversed the flag design to light blue over yellow. The Sich Riflemen opposed the coup and were disbanded along with the "Bluecoats", a Ukrainian division formed from POWs in Germany and Austria and named after their blue uniforms.

Internal opposition was provoked by the requisitioning of food stocks and restoration of land to the wealthy landowners. Opponents of the Skoropadskyi regime committed acts of arson and sabotage and, in July 1918, assassinated von Eichhorn, [now?] the commander of German troops in Ukraine. In August 1918, the anti-Skoropadsky coalition succeeded in forcing him to re-form the Sich Riflemen. By then it was becoming obvious that the Central Powers had lost the war and that Skoropadsky could no longer rely on their support. He thus looked for support from conservative Russian elements in society and proposed joining a federation with Anton Denikin and the White Movement. This further eroded his standing among Ukrainians.

In December 1918 Skoropadskyi was deposed and the Directorate was established as a form of the Ukrainian People's Republic.[2][3] 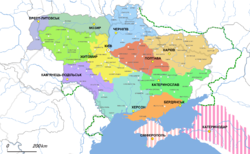 Administrative division of the Ukrainian State. The green line indicates the extent of the State's territorial claims. 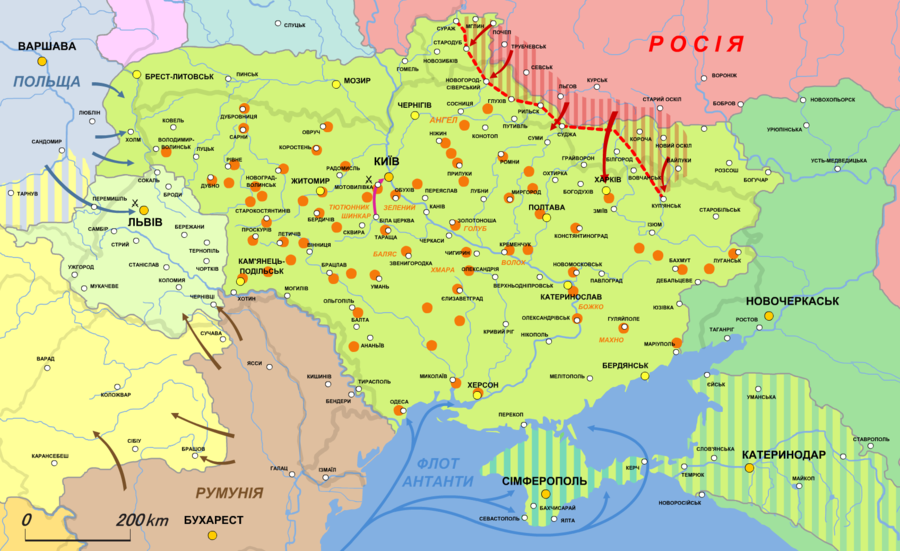 Almost the entire commanding staff of the Ukrainian State armed forces consisted of officers of the former Imperial Russian Army.[5] Most officers were not supportive of the Ukrainian cause and viewed it as a way to make it through tough times.[5] At the same time, wide masses of the population did not have a developed sense of national identity and easily fell under the influence of socialist and communist propaganda.[5]

Following the armistice ending World War I, Ukrainian socialists formed the Directorate of Ukraine (the "Directory"), whose forces were spearheaded by the Sich Riflemen and "Greycoats".[clarification needed] Although German and Austrian troops had not yet withdrawn from Ukraine, they had no further interest in fighting. Most of Skoropadskyi's own forces changed sides and joined the Directory.[5]

On November 16, 1918, starting in Bila Tserkva, fighting broke out in the Hetmanate. Skoropadskyi had to turn to the thousands of Russian White Guard officers who had escaped to Ukraine with the intention of join Denikin's Volunteer Army in the region of the Don River further east. They[clarification needed] were assembled into a "Special Corps" but proved unable to resist the Directory's forces led by Symon Petlyura. Skoropadskyi abdicated his position as Hetman on December 14, as the Ukrainian People's Army took Kiev. He was expelled and the Hetmanate was replaced by the provisional government of the Directorate.