Ukrainian collaborationism with the Axis powers

Distrikts Galizien Spring 1943. Celebrations dedicated to the creation of the SS-Freiwilligen-Schützen-Division «Galizien».

During the military occupation of Ukraine by Nazi Germany, a large number of Ukrainians chose to cooperate with the Nazis. Reasons for this generally included resurgent Ukrainian nationalism, aspirations for regaining Independence and widespread anger and resentment against the Russians over the Holodomor, which occurred only a few years before. These were coupled with rampant racism towards other ethnic groups (such as Jews, Tatars, Roma peoples and Poles) as well as a prevailing sentiment of antisemitism. However, the absence of Ukrainian autonomy under the Nazis, mistreatment by the occupiers, and the deportation of hundreds of thousands of Ukrainians as slave laborers, soon led to a rapid change in the attitude among the collaborators.

By the time the Red Army returned to Ukraine, a significant number of the population welcomed its soldiers as liberators.[1] More than 4.5 million Ukrainians joined the Red Army to fight Nazi Germany, and more than 250,000 served in Soviet partisan paramilitary units.[2]

Hitler's invasion of the Soviet Union in Operation Barbarossa began on June 22, 1941, and by September the occupied territory was divided between two German administrative units, the General Government and the Reichskommissariat Ukraine. 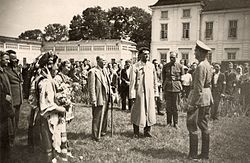 Ukrainians greeting arriving Germans in Western Ukraine in the summer of 1941.

Ukrainians who chose to resist and fight German occupation forces joined the Red Army or the irregulars. However, especially in the region of Galicia assigned to General Government, there was little to no loyalty towards the Soviet Union; the region had only been part of the U.S.S.R since its seizure by the Red Army during the Soviet invasion of Poland in September 1939. Although the Ukrainian SSR did give the people a degree of national and cultural autonomy, it came at a heavy price. In 1933 millions of Ukrainians starved to death in the infamous, likely orchestrated famine, the Holodomor,[3] and in 1937 several thousand intelligentsia were exiled, sentenced to Gulag labor camps or simply executed. The negative impact of Soviet policies helped gain support for the German cause, and in some regions the nationalist minority initially viewed the Nazis as allies in the struggle to free Ukraine from Stalinist oppression and achieve independence again.

Those Ukrainians who collaborated with the German occupiers did so in various ways including: participating in the local administration, in German-supervised auxiliary police, Schutzmannschaft, in the German military, and serving as concentration camp guards. Nationalists in the west of Ukraine were among the most enthusiastic, hoping that their efforts would enable them to reestablish an independent state later on. For example, on the eve of Barbarossa as many as four thousand Ukrainians, operating under Wehrmacht orders, sought to cause disruption behind Soviet lines. After the capture of Lviv, a highly contentious and strategically important city with a significant Ukrainian minority, OUN leaders proclaimed a new Ukrainian State on June 30, 1941 and were simultaneously encouraging loyalty to the new regime, in hope that they would be supported by the Germans. Already in 1939, during the German-Polish war, the OUN had been “a faithful German auxiliary.”[4]

Professor Ivan Katchanovski writes that during the war the leadership of OUN B and UPA was heavily engaged in Nazi collaboration. He wrote that at least 23% of its leaders in Ukraine were in the auxiliary police, Schutzmannschaft Battalion 201, as well as in other police formations. 18% took part in training in Nazi Germany's military and intelligence schools in Germany and Nazi-occupied Poland, 11% served the Nachtigall and Roland Battalions, 8% in local administration during the Nazi occupation, and 1% in the SS Galicia Division. According to Katchanovski, the percentage of Nazi collaborators among the OUN-B and UPA leadership is likely higher than those numbers, since much data from early occupation is missing[5]

However, despite initially acting warmly to the idea of an independent Ukraine, the Nazi administration had other ideas, in particular the Lebensraum programme and the total 'Aryanisation' of the population. They preferred to play Slavic nations out one against the other. OUN initially carried out attacks on Polish villages, trying to exterminate Polish populations or expel Polish enclaves from what the OUN fighters perceived as Ukrainian territory.[6] When OUN help was no longer needed, its leaders were imprisoned, and many members were summarily executed. The arrests were only temporary however according to professor Katchanovski; while 27% of the leadership of OUN B and UPA were arrested at one time, they were released relatively soon or allowed to escape[7]

Main article: The Holocaust in Ukraine

Holocaust in Ukraine: the map

The atrocities against the Jewish population during the Holocaust started within a few days of the beginning of the Nazi occupation. There are indications that the Ukrainian auxiliary police was used in the round-up of Jews for the Babi Yar massacre[8][9] and in other Ukrainian cities and towns, such as Stepan,[10] Lviv,[11][12] Lutsk,[13] and Zhytomyr.[14] On September 1, 1941, Nazi-controlled Ukrainian newspaper Volhyn wrote "The element that settled our cities (Jews)... must disappear completely from our cities. The Jewish problem is already in the process of being solved."[15]

Anti-semitism had turned to a hatred of Jews by those Ukrainians who blamed Jews that had worked for Polish landlords, alongside with religious prejudice. Also, the murders of prisoners by Soviet secret police retreating eastwards from the German invasion were blamed on Jews. These feelings fueled ultra-nationalist Ukrainian militias which accompanied Nazi armies moving in eastern Europe.[16] The German commander gave an enraged crowd in Boryslaw - who had seen bodies of young men murdered and laid out in the town square - 24 hours to act as they wished against the Jews - they were forced to clean the dead bodies, to dance, and then killed by beating with axes, pipes, etc. The same sort of murders took place in Brzezany. In Lviv, some 9,000 Jews were murdered by Ukrainian nationalist extremists.[16][17] As late as 1945, Ukrainian nationalists were still rounding up and murdering Jews.[18]

In May 2006, the Ukrainian newspaper Ukraine Christian News commented: "Carrying out the massacre was the Einsatzgruppe C, supported by members of a Waffen-SS battalion and units of the Ukrainian auxiliary police, under the general command of Friedrich Jeckeln. The participation of Ukrainian collaborators in these events, now documented and proven, is a matter of painful public debate in Ukraine."[19]

While some of the collaborators were volunteers, others were no doubt given little choice. Ukrainians captured fighting for the Red Army were sometimes given the choice of possibly dying of near starvation and exposure in the ill-equipped POW camps reserved for the Red Army[20] or working for the invaders as a hiwi, including duty in the concentration camps and ghettos as guards. The men selected for such duty were trained in the Trawniki concentration camp and were used in that part of the Final Solution known as Operation Reinhard. However, they were never fully trusted, and some would escape their enforced duty, sometimes along with the prisoners they were guarding, and occasionally killing their SS commanders in the process.[21][22] 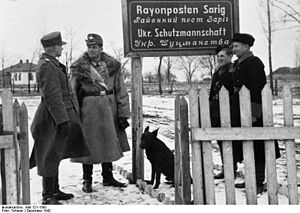 109, 114, 115, 116, 117, 118, 201-st Ukrainian Schutzmannschaftant-battalions participated in anti-partisan operations in Ukraine and Belarus. In February and March 1943, the 50th Ukrainian Schutzmannschaftant-battalion participated in the large anti-guerrilla action «Operation Winterzauber» (Winter magic) in Belarus, cooperating with several Latvian and the 2nd Lithuanian battalion. Schuma-battalions burned down villages suspected of supporting Soviet partisans.[23] On March 22, 194, all the inhabitants of the village Chatyń in Belarus were burnt alive by the Nazis, with participation of the 118th Schutzmannschaft battalion.[24][25]

On 28 April 1943 the German Governor of District Galicia, Dr. Otto von Wächter, and the local Ukrainian administration officially declared the creation of the SS-Freiwilligen-Schützen-Division Galizien. Volunteers signed for service as of 3 June 1943 numbered 80 thousand.[26] On 27 July 1944 the Galizien division was formed into the Waffen SS as 14. Waffen-Grenadier-Division der SS (gal. Nr. 1).[27]

The prevailing belief is that these men eagerly volunteered to take part in a patriotic war against the Soviets, not because of any support for Nazi Germany.[28] Also, at least some of them were victims of compulsory conscription, since Germany had now suffered defeats and lost manpower on the eastern front.[29] Sol Litman of the Simon Wiesenthal Center claims that there are many proven and documented incidents of atrocities and massacres committed by the Waffen-SS Galizien against minorities, particularly Jews during World War II.[30] However other authors, including Michael Melnyk,[29] and Michael O. Logusz,[31] maintain that members of the division served almost entirely on the front lines against the Red Army and defend the unit against the accusations made by Litman and others. Official SS records show that the 4,5,6 and 7 SS-Freiwilligen regiments were under Ordnungspolizei command at the time of the accusations.[27][32] Neither the division nor any of its former members were ever charged with any war crimes (see 14th Waffen Grenadier Division of the SS (1st Ukrainian)#Accusations of war atrocities).