From Infogalactic: the planetary knowledge core
Jump to: navigation, search
For the modern subdivision of Ukraine, see Administrative divisions of Ukraine. For a modern political party in Ukraine and its parliamentary faction called "Regions of Ukraine", see Party of Regions. 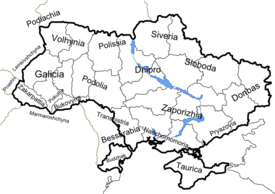 A list of the various regions of Ukraine and/or inhabited by Ukrainians and their ancestors throughout history.

The traditional names of the regions of Ukraine are important geographic, historical, and ethnographic identifiers.

Regions historically inhabited by Ukrainians (mostly with other nations), which are partly or wholly outside modern Ukraine: 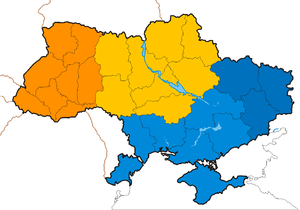 Sometimes more Oblasts can be referred to as "Eastern Ukraine":

Due to geopolitical, historical, and cultural factors, there are semi-official nominations to a certain region. The map right shows the broad sense of particular regions. The terms West, East, South and Central Ukraine are often used. There is no clear description on what includes/excludes one region or another, but rather a general reference. Here is a list of what constitutes such nominations:

Other terms are rarely used such as South-West Ukraine, which can denote either Transcarpathia, or Budjak. Sometimes the term South-Eastern Ukraine is used to define both regions of the Southern and Eastern Ukraine. Due to the shape of the country, in narrow definition, term Northern Ukraine is often used to denote either the bulge of Chernihiv/Sumy Oblasts or, in broader terms, the whole of Polesia. North-western Ukraine almost exclusively refers to the historic region of Volhynia. This makes the term North-Eastern Ukraine rarest of them all, and is either used as synonym for the narrow definition of Northern Ukraine, or as synonym for Sloboda Ukraine (particularly the Sumy Oblast).