The hryvnia, sometimes hryvnya (Ukrainian: гривня, pronounced [ˈɦrɪu̯ɲɑ], abbr.: грн (hrn in the Latin alphabet)); sign: ₴, code: UAH), has been the national currency of Ukraine since 2 September 1996. The hryvnia is subdivided into 100 kopiykas. It is named after a measure of weight used in medieval Kievan Rus'.

The currency of Kievan Rus' in the eleventh century was called grivna. The word is thought to derive from the Slavic griva; c.f. Ukrainian, Russian, Bulgarian, and Serbo-Croatian грива / griva, meaning "mane". It might have indicated something valuable worn around the neck, usually made of silver or gold; c.f. Bulgarian and Serbian grivna (гривна, "bracelet"). Later, the word was used to describe silver or gold ingots of a certain weight; c.f. Ukrainian hryvenyk (гривеник), Russian grivennik (гривенник, "10-kopek piece").

The modern Ukrainian hryvnia is sometimes transliterated as hryvna, hrivna, gryvna or grivna, due to its Russian language counterpart, гри́вна, pronounced grívna. However, the standard English name for the currency is hryvnia.[3]

The National Bank of Ukraine has recommended that a distinction be made between hryvnia and grívna in both historical and practical means.[citation needed]

The hryvnia sign is a cursive Ukrainian letter He (г), with a double horizontal stroke (₴), symbolizing stability, similar to that used in other currency symbols such as ¥ or €. The sign was encoded as U+20B4 in Unicode 4.1 and released in 2005.[4] It is now supported by the latest computer systems. In Ukraine, if the hryvnia sign is unavailable, the abbreviation "грн." is used. 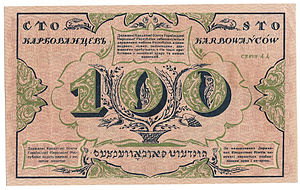 A currency called hryvna was used in Kievan Rus'. In 1917, after the Ukrainian National Republic declared independence from the Russian Empire, the name of the new Ukrainian currency became hryvnia, a revised version of the Kievan Rus' hryvna. The designer was Heorhiy Narbut.

The hryvnia replaced the karbovanets during the period 2–16 September 1996, at a rate of 1 hryvnia = 100,000 karbovantsiv.[5] The karbovanets was subject to hyperinflation in the early 1990s following the collapse of the USSR.

To a large extent, the introduction of hryvnia was secretive.[6] Hryvnia was introduced according to President's Decree dated 26 August 1996, published on August 29. During the transition period, September 2–16, both hryvnia and karbovanets were used in circulation, but merchants were required to give change only in hryvnias. All bank accounts were converted to hryvnia automatically. During the transition period, 97% of karbovanets were taken out of circulation, including 56% in the first 5 days of the currency reform.[6] After 16 September 1996, the remaining karbovanets were allowed to be exchanged to hryvnias in banks.

The hryvnia was introduced during the period when Victor Yushchenko was the Chairman of National Bank of Ukraine. However, the first banknotes issued bore the signature of the previous National Bank Chairman, Vadym Hetman, who resigned back in 1993, because the first notes had been printed as early as 1992 by the Canadian Bank Note Company, but it was decided to delay their circulation until the hyperinflation in Ukraine was brought under control.

On 18 March 2014, following its annexation by Russia, the new Republic of Crimea announced that the Ukrainian hryvina was to be dropped as the region's currency in April 2014.[7] The Russian rouble became an official currency in Crimea on 21 March 2014.[8] Until 1 June 2014, the hryvnia could also be used for cash payments only.[8]

By contrast, the hryvnia remains the predominant currency in the conflicted raions of Donbass, i. e. in the secessionist areas of Donetsk and Lugansk.[9]

No coins were issued for the first Hryvnia.
Coins were first struck in 1992 for the new currency but were not introduced until September 1996. Initially coins valued between 1 and 50 kopecks were issued. In March 1997, 1 hryvnia coins were added; they are however rarely seen in circulation. The note of the same value is far more commonly used. Since 2004 several commemorative 1 hryvnia coins have been struck.

In October 2012 the National Bank of Ukraine announced that it is examining the possibility of withdrawing the 1 and 2 kopeck-coins from circulation.[10] The coins had become too expensive to produce compared to their nominal value. Due to actual reports 1 and 2 kopeek-coins are not produced anymore since 2013, but will remain in circulation.

Also, on 26 October 2012, the National Bank of Ukraine announced it is considering the introduction of a 2 Hryvnia coin.[11]

Banknotes of the first series in denominations of 50 and 100 hryven' also existed but were not introduced because this nominations were not needed in the economical crisis during the monetary reform mid of 90ties.

Also in 1996, the 1, 50, and 100 hryvnia notes of the second series were introduced, with 1 hryvnia dated 1994. The banknotes were designed and printed by British De La Rue.[15] Since the opening of the Mint of the National Bank of Ukraine in cooperation with De La Rue in March 1994 all banknotes have been printed in Ukraine.[15]

All hryvnia banknotes issued by the National Bank continue to be a legal tender. As of 2008, the banknotes of early series can rarely be found in circulation. Also, despite the devaluing of the currency since its introduction, all kopeck coins remain in circulation, as well as all low-value hryvnia bills, including 1 hryvnia.

As with the U.S. dollar, the 1 hryvnia bill is commonly used, and the 1 hryvnia coin is rarely seen. The 100 hryvnia denomination is quite common due to its moderately high value. Also common is the 200 hryvnia, as most Ukrainian ATMs dispense currency in this denomination, much as with the US$20 bill.

In 2016 the NBU paper factory started to produce banknote-paper with flax instead of cotton.[16]

A commemorative 1 hryvnia coin to biathlon of the 1998 Winter Olympics, held in Nagano, Japan.

Following the Asian financial crisis in 1998 the currency devaluated to UAH 5.6 = USD 1.00 in February 2000. Later, the exchange rate remained relatively stable at around 5.4 hryvnias for 1 US dollar and was fixed to 5.05 hryvnias for 1 US dollar from 21 April 2005 until 21 May 2008. In mid-October 2008 rapid devaluation began, in the course of a global financial crisis that hit Ukraine hard, with the hryvnia dropping 38.4% from UAH 4.85 for USD 1 on 23 September 2008 to UAH 7.88 for USD 1 on 19 December 2008.[18][19] After a period of instability, a new peg of 8 hryvnias per US dollar was established, and remained for several years. In 2012, the peg was changed to a managed float (much like that of the Chinese yuan) as the euro and other European countries' currencies weakened against the dollar due to the debt crisis in Greece, and the value in mid-2012 was about 8.14 UAH per dollar.

As from 7 February 2014, following political instability in Ukraine, the National Bank of Ukraine changed the hryvnia into a fluctuating/floating currency in an attempt to meet IMF requirements and to try to enforce a stable price for the currency in the Forex market.[20] In 2014 and 2015 the hryvnia lost about 70% of its value against the U.S. dollar.[19][21] After stabilization efforts by Ukrainian authorities in March 2015 1 US dollar was worth about 22 hryvnia.[19] Early February 2016 1 US dollar was worth about 26 hryvnia.[19]