The Ukrainische Hilfspolizei or the Ukrainian Auxiliary Police (Ukrainian: Українська поліція допоміжна, Ukrains’ka politsiia dopomizhna) was the official title of the local police force established by Nazi Germany during World War II on the Nazi-occupied portion of the Ukrainian Soviet Socialist Republic; shortly after the German conquest in Operation Barbarossa, it was renamed Reichskommissariat Ukraine.[1]

The Ukrainian Auxiliary Police was created by Heinrich Himmler in mid-August 1941 under the control of German Ordnungspolizei in General Government.[1] The actual Reichskommissariat Ukraine was formed officially on 20 August 1941.[2] The uniformed force was composed in large part of the former members of the Ukrainian People's Militia created by OUN in June.[3] There were two categories of German-controlled Ukrainian armed organisations. The first comprised mobile police units most often called Schutzmannschaft,[1] or Schuma, organized on the battalion level and which engaged in anti-Jewish and anti-partisan operations in most areas of Ukraine. It was subordinated directly to the German Commander of the Order Police for the area.[4]

The second category was the local police force (approximately, a constabulary), called simply the Ukrainian Police (UP) by the German administration, which the SS raised most successfully in the District of Galicia (formed 1 August 1941) extending south-east from the General Government. Notably, the District of Galicia – although considered by some to be part of the occupied Ukraine of today – was a separate administrative unit from the actual Reichskommissariat Ukraine. They were not connected with each other politically.[4] 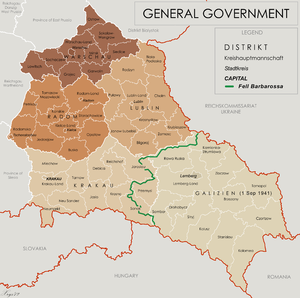 Map of the German Distrikt Galizien as of 1 September 1941

The local municipal police force (UP) in the occupied Ukrainian SSR came into existence right after the commencement of Operation Barbarossa. It was the result of an order issued on 27 July 1941 by the German commander in chief of the Order Police in occupied Kraków. The Ukrainian auxiliary police in the new District of Galicia fell under the command of the German office for the General Government.[6]

An actual ethnic Ukrainian command centre did not exist. The top Ukrainian police officer, Vladimir Pitulay, rose to the rank of major and became the district commandant (Major der Ukrainische Polizei und Kommandeur) in Lemberg (now Lviv). A police school was established in Lviv by the district SS-and-Police Leader in order to meet plans for growth. The school director was Ivan Kozak.[7] The total number of enlisted men in the new politically independent Distrikt Galizien amounted to some 6,000 volunteers including 120 low-level officers who served there.[7] The units were used primarily to keep order and carry out constabulary duties.[8] Their actions were restricted by other police groups such as the Sonderdienst, made up of Volksdeutsche; the Kripo (Criminal police); Bahnschutz (railroad and transport police); and the Werkschutz, who kept order and guarded industrial plants. They were supported by the Ukrainian Protection Police and the Ukrainian Order Police.[8] 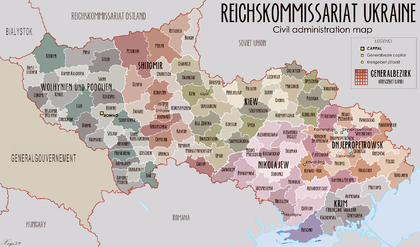 In the newly formed Reichskommissariat Ukraine the auxiliary police forces were named Schutzmannschaft battalions,[9][10] and amounted to more than 35,000 men.[11] The name of the formations reflected their geographic jurisdiction.[6] The make-up of the officer corps were often representative of various local nationalities. Professor Wendy Lower from Towson University writes that although Ukrainians greatly outnumbered other non-Germans in the auxiliary police, only the Volksdeutsche Germans from Ukraine were given leadership roles.[12] Many of those who joined the ranks of the police had served as militiamen under Soviet rule since 1939.[13] Tadeusz Piotrowski wrote that the majority of Ukrainische Hilfspolizei came from the Organization of Ukrainian Nationalists-B,[14] confirmed by John-Paul Himka,[15] although Ivan Patryljak argued that the German authorities expressly forbade drafting known nationalists.[citation needed] According to Andrew Gregorovich (Ukrainian Review), the ethnic composition of Auxiliary Police reflected the demographics of the land and included Russians, Poles, and German Volksdeutsche drafted from the local population and Soviet POWs,[16] but Browning (Ordinary Men) and Lower both insist that, for the German administration, nobody but the "Ukrainians and local ethnic Germans could be relied upon to assist with the killing".[17][18] Also, according to Aleksandr Prusin most members were ethnic Ukrainians, hence the name or the force.[19] The auxiliary police were directly under the command of the Germanic-SS, Einsatzgruppen, and military administration.[20]

Participation in Holocaust and Nazi atrocities

Professor Alexander Statiev of the Canadian University of Waterloo writes that Ukrainian Auxiliary Police were the major perpetrator of the Holocaust on Soviet territories based on native origins, and those police units participated in the extermination of 150,000 Jews in the area of Volhynia alone.[21] German historian Dieter Pohl in The Shoah in Ukraine writes that the auxiliary police was active during killing operations by the Germans already in the first phases of the German occupation.[22] The auxiliary police registered the Jews, conducted raids and guarded ghettos, loaded convoys to execution sites and cordoned them off. Some 300 auxiliary policemen from Kiev helped organize the massacre in Babi Yar.[22] They also took part in the massacre in Dnipropetrovsk, where the field command noted that the cooperation ran "smoothly in every way". Cases where local commandants ordered murder of Jews using police force are known.[22] In killings of Jews in Kryvy Rih the "entire Ukrainian auxiliary police" was put to use.[22]

Defining nationality of Ukrainian policemen using present-day classifications is problematic, because in German occupied eastern Poland (see: District of Galicia) there was no perception of de jure Ukrainian independent statehood. Some Ukrainian Hilfspolizei who harbored a pathological hatred for Poles and Jews – resulting in acts of mass murder – remained formally and legally Polish from the time before the invasion until much later. Thirty years after the war ended, one former Ukrainian policeman, Jan Masłowski (a.k.a. Ivan Maslij), was recognized in Rakłowice near Wrocław by Polish survivors of massacres committed by Ukrainische Hilfspolizei in the towns of Szczepiatyn, Dyniska, Tarnoszyn, Niemstów, and Korczów. He was sentenced to death in Poland in 1978.[23]

On 13 November 1942, members of the Ukrainische Hilfspolizei robbed and executed 32 Poles and 1 Jew in the village of Obórki (pl), located in prewar Wołyń Voivodeship. After the crime the village was burned down.[24] On 16 December 1942, the Ukrainian policemen, led by Germans, killed 360 Poles in Jezierce (former powiat Rivne).[24][25]

In Lviv, in late February and March 1944, the Ukrainische Hilfspolizei arrested a number of young men of Polish nationality. Many of them were later found dead and their Identity documents stolen. The Government Delegation for Poland started negotiations with the OUN-B. When they failed, Kedyw began an action called "Nieszpory" (Vespers) where 11 policemen were shot in retaliation and the murders of young Poles in Lviv stopped.[26]

For many who joined the police force, enlistment served as an opportunity to receive military training and direct access to weapons. Bandera's OUN leadership on 20 March 1943 issued secret instructions ordering their members who had joined the German auxiliary police to desert with their weapons and join with the military detachment of OUN (SD) units in Volyn. The number of trained and armed policemen who in spring 1943 joined the ranks of the future Ukrainian Insurgent Army were estimated to be 10,000. This process in some places involved engaging in armed conflict with German forces as they tried to prevent desertion.[27]

By 1942, after the military administration was replaced with the regular Gendarmerie in occupied East, the strength of the Schutzmannschaft had increased tenfold. However, the new recruits were mostly not in the battalions. Instead, they took up the individual post duty as militias in place of former local Ordnungsdienst. The actual Security Battalions (or Schumas, German: Schutzmannschaft Bataillone) comprised only one-third of the overall strength of the formation.[28] As a matter of course, the static police wore black uniforms from the pre-war German stock which was no longer used and kept in storage. The black uniforms of the former Allgemeine-SS including their characteristic field caps were simply stripped of German insignia and given to Schutzmannschaft to use with the new patches. Gradually, the mobile units were issued field-grey uniforms (pictured).[29] The desired size of each battalion was about 500 soldiers divided into three companies of 140-150 men each, with 50 staff members.[30][31] 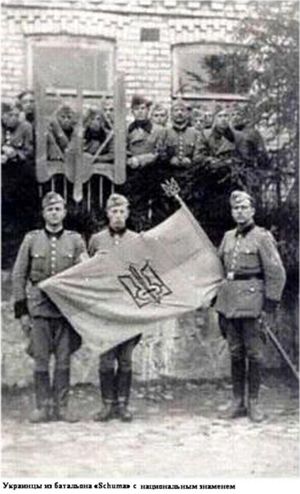 Most battalions were assigned block numbers based on ethnic and national makeup for ease of recognition. Those in Russia South and the heart of Ukraine were numbered from 101 to 200. The ones operating in Russia Center and in Byelorussia were numbered from 51 to 100.[31] An exception was Battalion 201, which was formed not in Galicia but in Frankfurt an der Oder in October 1941, from members of the disbanded Nachtigall Battalion, formed originally by OUN-B.[32]