Ulyanovsk Oblast (Russian: Улья́новская о́бласть, Ulyanovskaya oblast) is a federal subject of Russia (an oblast). It is located in the Volga Federal District. Its administrative center is the city of Ulyanovsk. Population: 1,292,799 (2010 Census).[10] 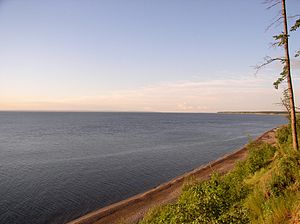 It is located on the northern edge of Central Steppes. A quarter of its territory is covered with deciduous forests; the rest is covered with steppes and meadows. The oblast is divided in half by the Volga River. Hilly areas to the west of the Volga are known as Volga Upland (elevations up to 358 m (1,175 ft) ). Eastern part of the oblast is mostly flat. The water table occupies about 6% of territory.[citation needed] 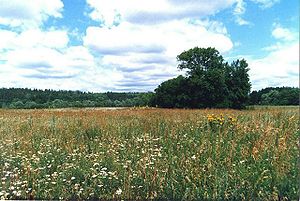 Ulyanovsk Oblast has moderately continental, highly volatile climate. Temperature averages at +19 °C (66°F) in July, and −11 °C (12°F) in January. As weather systems move in and out of the area, average daily temperatures often change more than +25 °C (77°F) in the matter of days. Fixed snow cover is typically present from November to the beginning of April. Overnight frosts occur until late May, restricting agriculture to cold-resistant plants such as rye and winter wheat. Annual precipitation drops out 400 mm (16 inches) a year.[citation needed] 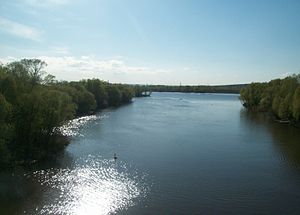 Ulyanovsk Oblast is located in the zones of wooded plain and broad-leaved scaffolding.

Scaffolding occupy 1/4 territories. In the northwest — large massifs of oak scaffolding with the participation of linden, maple; in the Transvolga region — meadow steppes, separate pine borons.

The area is inhabited by moose, marten, squirrel, hare (white and other) as well as numerous planktonic and marshy- coastal birds. Kuybyshev Reservoir  is home to fish such as bream, pike-perch, carp and others. Ulyanovsk Oblast also has a concentrated wasp population. 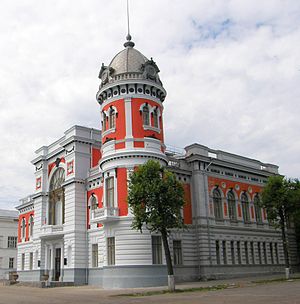 Regional Museum of History and Arts

The first settlements of Middle Volga people were established in this area of Volga according to archaeological science more than 100,000 years ago. The presence of human groups in the Ulyanovsk Volga region in the Paleolithic show separate parking and location of stone tools and bones found in the estuary. Cheremshan Tunguz on the peninsula, on the shores of the Volga in the region of Undory resort.

In the 8th and 9th centuries Ulyanovsk Volga region became a part of the early Volga Bulgaria, as a union of nomadic Turkic and sedentary Finno-Ugric tribes.

In the late 14th and early 15th century, the devastating Central Asian ruler Tamerlane began desolation territory of the Volga Ulyanovsk. Since the late 1430s the region was a part of the Kazan Khanate. After the pacification of the territory of the future of his governorship Simbirsk gradually settled by Ruthenians, who mingled with the local Tatars.

In the late 1640s, under the leadership of Bogdan Hitrovo, construction of the Karsunsky-Simbirsk defense line began (1647-1654 biennium).

22 years after its founding, the city of Simbirsk had to withstand a siege of the Cossacks and led Ataman Stepan Razin.

In the 18th century in connection with the expansion of the territory of the Russian state, in particular, to the east, and began to develop intensively populated southern regions of the present territory of the Ulyanovsk region. Simbirsk began to lose its status of strategic military importance, but remained the provincial center. 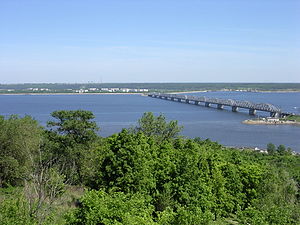 The Imperial Bridge across the Volga River in Ulyanovsk

Soviet Marxism–Leninism (communism) took power in Simbirsk one and a half months after the October Revolution—December 10, 1917. In 1918, the province was at the heart of the civil war. In July 1918 Simbirsk was captured by troops led by White Russian tsarist General Komuch Kappel. But on September 12 the Bolsheviks recaptured the city, resulting in the restoration of communism. The Red Army victory was led by the "Iron Division". Simbirsk was the headquarters of the Revolutionary Military Council of the eastern front. The ammunition factory in Simbirsk was essential to ensuring the Red Army victory.

In 1924 Simbirsk was renamed Ulyanovsk. On May 14, 1928 the Ulyanovsk province of the Russian Soviet Federation Socialist Republici (RSFSR) was abolished.[15] The Province, together with Penza, Samara and Orenburg became part of the newly formed Middle Volga region.

Since the beginning of the Great Patriotic War in Ulyanovsk, being the rear, the evacuated enterprises, institutions and people from the western regions of the country, from Moscow and Leningrad. January 19, 1943 from several districts of Kuybyshev and Penza Oblasts formed Ulyanovsk Oblast.

In the 1950 and 1960s in the creation of new enterprises (factory of heavy and unique machines, mechanical plant, Dimitrovgrad Research Institute of Atomic Reactors, etc.), road bridge over the Volga River and the airport in Ulyanovsk. In 1970, the then General Secretary of the Communist Party of the Soviet Union Leonid Brezhnev, inaugurated memorial museum of Lenin. 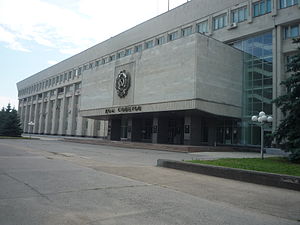 Seat of the Legislative Assembly

During the Soviet period, the high authority in the oblast was shared between three persons: The first secretary of the Ulyanovsk CPSU Committee (who in reality had the biggest authority), the chairman of the oblast Soviet (legislative power), and the Chairman of the oblast Executive Committee (executive power). Since 1991, CPSU lost all the power, and the head of the Oblast administration, and eventually the governor was appointed/elected alongside elected regional parliament.

The Charter of Ulyanovsk Oblast is the fundamental law of the region. The Legislative Assembly of Ulyanovsk Oblast is the province's standing legislative (representative) body. The Legislative Assembly exercises its authority by passing laws, resolutions, and other legal acts and by supervising the implementation and observance of the laws and other legal acts passed by it. The highest executive body is the Oblast Administration, which includes territorial executive bodies such as district administrations, committees, and commissions that facilitate development and run the day to day matters of the province. The Oblast administration supports the activities of the Governor who is the highest official and acts as guarantor of the observance of the oblast Charter in accordance with the Constitution of Russia.

55% of residents of Ulyanovsk Oblast live in two cities with population above 25,000—Ulyanovsk and Dimitrovgrad.

The ethnic composition is as follows:[10] 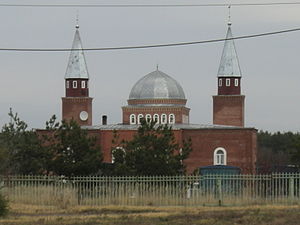 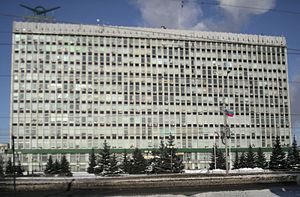 Ulyanovsk Oblast is part of the Volga economic region.

Ulyanovsk Oblast has an abundance of land, water, forest, and mineral resources. Ulyanovsk Region also has substantial reserves of other raw materials used in industry, such as various kinds of sand, cement materials, clays, and peat. One of the largest quartz sand deposits in the CIS, the Tashlinskoe deposit, is located in the region.

Ulyanovsk and Dimitrovgrad are industrial cities and contain a number of large plants and factories. Rural part of Ulyanovsk Oblast is agricultural and is focused primarily on animal husbandry, to the lesser extent on crop farming. There are two resorts in Ulyanovsk Oblast territory - "Bely Yar" and "Dubki". 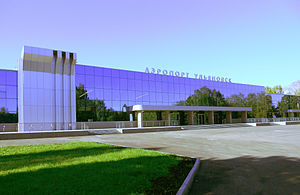 City of Ulyanovsk is a major, diversified, industrial hub for aircraft and auto industries.

In addition, a global, international airline for unique and heavy cargo , Volga-Dnepr Airlines is based in the city too.

There are many manufacturing facilities of foreign corporations such as Legrand (company), Mars, Incorporated,[22] Takata-Petri,[23] Anadolu Efes S.K..,[24] ALFA (Mexico) and others.

Ulyanovsk has also a strong military base presence in town. The 31st Airborne Brigade of the Russian Airborne Troops of the armed forces is based in Ulyanovsk.

Tourism is a growing industry in this region because of Volga micro-climate and historical significance of Simbirsk.[25] Hilton Hotel Group and Marriott Hotels & Resorts are building their hotels in the downtown area.

The region of Undory, a driving distance from Ulyanovsk is famous for its spas and mineral water. The city offers many options for sports enthusiasts. The countryside is ideal for outdoor and water sports. The springs of Undory have been known for more than 200 years. The water at spa is rich in sodium chloride, and comes from artesian wells.

Aqua Mall is an American-type mall concept that opened in Ulyanovsk on the banks of Sviyaga river with modern cinema theater, IMAX. The city has also a large presence of international fast food brands such as McDonald's, Burger King, Baskin Robbins, Sbarro, KFC and others. Local Russian brands are also well-represented in this market. 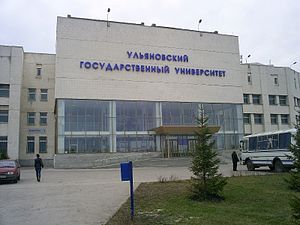 There is also a number of technical and medical colleges in Ulyanovsk. 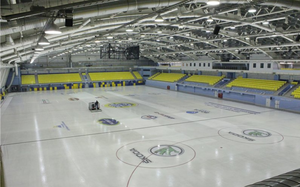 Bandy is traditionally the most popular sport in Ulyanovsk Oblast.[26]Volga[27] plays in the Russian Bandy Super League. The other club Simbirsk plays in the 2nd division. An indoor arena for bandy, Volga-Sport-Arena, has been built, as one of the first in Russia. It has a capacity of 5 000.[3] The outdoor stadium will be modernised and have a capacity of 18 000. The Bandy World Championship 2016 will be played in Ulyanovsk.[4] and Dimitrovgrad.

Ulyanovsk also hosted matches of first qualifying round UEFA Women's Under-17 Championship 2014. Matches were held at "Trud" Football Stadium in the downtown Ulyanovsk.

Overall sports get a lot of support from the Ulyanovsk Oblast government.[5]