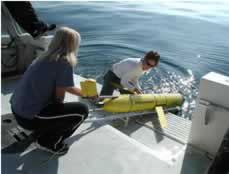 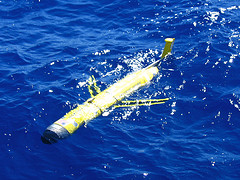 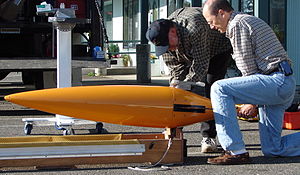 Dr. Bruce Howe and Bill Felton of the University of Washington prepare a Seaglider for deployment 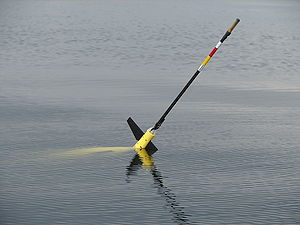 University of Washington's Seaglider at the surface between dives

An underwater glider is a type of autonomous underwater vehicle (AUV) that uses small changes in its buoyancy in conjunction with wings to convert vertical motion to horizontal, and thereby propel itself forward with very low power consumption. While not as fast as conventional AUVs, gliders using buoyancy-based propulsion represent a significant increase in range and duration compared to vehicles propelled by electric motor-driven propellers, extending ocean sampling missions from hours to weeks or months, and to thousands of kilometers of range. Gliders follow an up-and-down, sawtooth-like profile through the water, providing data on temporal and spatial scales unavailable to previous AUVs, and much more costly to sample using traditional shipboard techniques.[1] A wide variety of glider designs are in use by Navy and ocean research organizations and typically cost $100,000 (USD)[2]

The DARPA SBIR program received a proposal for a temperature gradient glider in 1988. DARPA was aware at that time of similar research projects underway in the USSR.[3]

The concept of an underwater glider was first explored in the early 1960s with a prototype swimmer delivery vehicle named Concept Whisper.[4] The sawtooth glide pattern, stealth properties and the idea of a buoyancy engine powered by the swimmer-passenger was described by Ewan Fallon in his Hydroglider patent submitted in 1960.[5] In 1992, the University of Tokyo conducted tests on ALBAC, a drop weight glider with no buoyancy control and only one glide cycle.[1] The idea of a glider with a buoyancy engine powered by a heat exchanger was introduced to the oceanographic community by Henry Stommel in a 1989 article in Oceanography, when he proposed a glider concept called Slocum, developed with research engineer Doug Webb. They named the glider after Joshua Slocum, who made the first solo circumnavigation of the globe by sailboat. They proposed harnessing energy from the thermal gradient between deep ocean water (2-4 °C) and surface water (near atmospheric temperature) to achieve globe-circling range, constrained only by battery power on board for communications, sensors, and navigational computers.[4]

By 2005, not only had a working thermal-powered glider (Slocum Thermal) been demonstrated by Webb Research (founded by Doug Webb), but they and other institutions had introduced battery-powered gliders with impressive duration and efficiency, far exceeding that of traditional survey-class AUVs. The University of Washington Seaglider and Scripps Institution of Oceanography Spray vehicles have performed feats such as crossing the Gulf Stream from the mainland USA to Bermuda, and, together with the Webb Slocum, conducting sustained, multi-vehicle collaborative monitoring of oceanographic variables in Monterey Bay.[1]

In 2011, the first wingless glider, SeaExplorer was released with a large payload capacity, dedicating the first third of the vehicle to interchangeable payloads, in addition to typical CTD sensors. The vehicle achieves 1 knot speeds, is equipped with externally rechargeable Li-Ion batteries and its torpedo shape is able to glide relying on two pairs of small static rear fins for stability.[citation needed]

Originally conceived as testbed for the thermal-power gliders before developing into a platform of their own, the Webb Slocum electric gliders have been widely deployed since 2003. On December 4, 2009, one of these gliders, RU-27, became the first to complete a transatlantic journey, traveling from New Jersey to the coast of Spain in 221 days.[6] The effort was led by a team from Rutgers University, which has become one of the largest glider operators.

Gliders typically make measurements such as temperature, conductivity (to calculate salinity), currents, chlorophyll fluorescence, optical backscatter, bottom depth, and (occasionally) acoustic backscatter. They navigate with the help of periodic surface GPS fixes, pressure sensors, tilt sensors, and magnetic compasses. Vehicle pitch is controllable by movable internal ballast (usually battery packs), and steering is accomplished either with a rudder (as in Slocum) or by moving internal ballast to control roll (as in SeaExplorer, Spray and Seaglider). Buoyancy is adjusted either by using a piston to flood/evacuate a compartment with seawater (Slocum) or by moving oil in/out of an external bladder (SeaExplorer, Seaglider, Spray, and Slocum Thermal). Commands and data are relayed between gliders and shore by satellite.[4]

Gliders vary in the pressure they are able to withstand. The Slocum model is rated for 200 meter or 1000 meter depths. Spray can operate to 1500 meters, Seaglider to 1000 meters, SeaExplorer to 700, and Slocum Thermal to 1200. In August 2010, a Deep Glider variant of the Seaglider achieved a repeated 6000-meter operating depth.[1]

In 2004, the US Navy Office of Naval Research began developing the world's largest gliders, the Liberdade class flying wing gliders, which uses a blended wing body hullform to achieve hydrodynamic efficiency. They were initially designed to quietly track diesel electric submarines in littoral waters, remaining on station for up to 6 months. The current model is known as the ZRay and is designed to track and identify marine mammals for extended periods of time.[7] It uses water jets for fine attitude control as well as propulsion on the surface.[7][8]