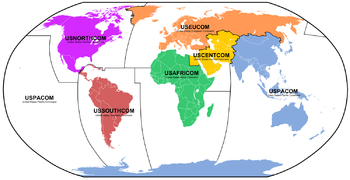 A Unified Combatant Command (UCC) is a United States Department of Defense command that is composed of forces from at least two Military Departments and has a broad and continuing mission.[1] These commands are established to provide effective command and control of U.S. military forces, regardless of branch of service, in peace and war.[2] They are organized either on a geographical basis (known as "Area of Responsibility", AOR) or on a functional basis, such as special operations, power projection, or transport. UCCs are "joint" commands with specific badges denoting their affiliation.

The creation and organization of the Unified Combatant Commands is legally mandated in Title 10, U.S. Code Sections 161–168.[3][4]

The Unified Command Plan (UCP) is updated annually in conjunction with the DoD Fiscal Year and can modify areas of responsibility or combatant command alignments or assignments.[5] As of September 2011, there are nine Unified Combatant Commands as specified in Title 10 and the latest annual UCP. Six have regional responsibilities, and three have functional responsibilities. Each time the Unified Command Plan is updated, the organization of the combatant commands is reviewed for military efficiency and effectiveness, as well as alignment with national policy.

Each unified command is led by a Combatant Commander (CCDR),[6] who is a four-star general or admiral. CCDRs exercise combatant command (COCOM),[7] a specific type of nontransferable command authority over assigned forces, regardless of branch of service, that is vested only in the CCDRs by federal law in 10 U.S.C. § 164.[8] The Chain of Command for operational purposes (as per the Goldwater–Nichols Act) goes from the President through the Secretary of Defense to the Combatant Commanders.

The following commands have their headquarters based outside their area of operations;

The current system of unified commands in the US military emerged during World War II with the establishment of geographic theaters of operation composed of forces from multiple service branches that reported to a single commander who was supported by a joint staff.[9] A unified command structure also existed to coordinate British and American military forces operating under the Combined Chiefs of Staff, which was composed of the British Chiefs of Staff Committee and the American Joint Chiefs of Staff.[10] In the European Theater, Allied military forces fell under the command of the Supreme Headquarters Allied Expeditionary Force (SHAEF). After SHAEF was dissolved at the end of the war, the American forces were unified under a single command, the US Forces, European Theater (USFET), commanded by General of the Army Dwight D. Eisenhower. Unified commands in the Pacific Theater proved more difficult to organize as neither General of the Army Douglas MacArthur nor Fleet Admiral Chester W. Nimitz were willing to become subordinate to the other.

The Joint Chiefs of Staff continued to advocate in favor of establishing permanent unified commands, and President Harry S. Truman approved the first plan on 14 December 1946.[11] Known as the "Outline Command Plan," it would become the first in a series of Unified Command Plans.[citation needed] The original "Outline Command Plan" of 1946 established seven unified commands: Far East Command, Pacific Command, Alaskan Command, Northeast Command, the U.S. Atlantic Fleet, Caribbean Command, and European Command. However, on 5 August 1947 the CNO recommended instead that CINCLANTFLT be established as a fully unified commander under the broader title of Commander in Chief, Atlantic (CINCLANT). The Army and Air Force objected, and CINCLANTFLT was activated as a unified command on 1 November 1947. A few days later, the CNO renewed his suggestion for the establishment of a unified Atlantic Command. This time his colleagues withdrew their objections, and on 1 December 1947 the U.S. Atlantic Command (LANTCOM) was created under the Commander in Chief, Atlantic (CINCLANT).[12]

Under the original plan, each of the unified commands operated with one of the service chiefs (the Chief of Staff of the Army or Air Force, or the Chief of Naval Operations) serving as an executive agent representing the Joint Chiefs of Staff.[13] This arrangement was formalized on 21 April 1948 as part of a policy paper titled the "Function of the Armed Forces and the Joint Chiefs of Staff" (informally known as the "Key West Agreement").[14] The responsibilities of the unified commands were further expanded on 7 September 1948 when the commanders' authority was extended to include the coordination of the administrative and logistical functions in addition to their combat responsibilities.[15]

Far East Command and U.S. Northeast Command were disestablished under the Unified Command Plan of 1956–57.

A 1958 "reorganization in National Command Authority relations with the joint commands" with a "direct channel" to unified commands such as Continental Air Defense Command (CONAD) was effected after President Dwight Eisenhower expressed concern[specify] about nuclear command and control.[16] CONAD itself was disestablished in 1975.

Although not part of the original plan, the Joint Chiefs of Staff also created specified commands that had broad and continuing missions but were composed of forces from only one service.[17] Examples include the U.S. Naval Forces, Eastern Atlantic and Mediterranean and the U.S. Air Force's Strategic Air Command. Like the unified commands, the specified commands reported directly to the JCS instead of their respective service chiefs.[18] These commands have not existed since the Strategic Air Command was disestablished in 1992. The relevant section of federal law, however, remains unchanged, and the President retains the power to establish a new specified command.[19]

The Goldwater-Nichols Defense Reorganization Act of 1986 clarified and codified responsibilities that commanders-in-chief (CINCs) undertook, and which were first given legal status in 1947. After that act, CINCs reported directly to the United States Secretary of Defense, and through him to the President of the United States.

The U.S. Atlantic Command became the Joint Forces Command in the 1990s after the Soviet threat to the North Atlantic had disappeared and the need rose for an integrating and experimentation command for forces in the continental United States. The Joint Forces Command was disbanded on August 3, 2011 and its components placed under the Joint Staff and other Combatant Commands.

On 24 October 2002, Secretary of Defense Donald H. Rumsfeld announced that in accordance with Title 10 of the US Code (USC), the title of "Commander-in-Chief" would thereafter be reserved for the President, consistent with the terms of Article II of the United States Constitution. Thereafter, the military CINCs would be known as "combatant commanders", as heads of the Unified Combatant Commands.

A sixth geographical unified command, United States Africa Command (USAFRICOM), was approved and established in 2007 for Africa. It operated under U.S. European Command during its first year, and transitioned to independent Unified Command Status in October 2008. In 2009, it focused on synchronizing hundreds of activities inherited from three regional commands that previously coordinated U.S. military relations in Africa.[20]

Each CCMD is headed by a four-star general or admiral recommended by the Secretary of Defense, nominated for appointment by the President of the United States, confirmed by the Senate and commissioned, at the President's order, by the Secretary of Defense. The Goldwater-Nichols Act and its subsequent implementation legislation also resulted in specific Joint Professional Military Education (JPME) requirements for officers before they could attain flag or general officer rank thereby preparing them for duty in Joint assignments such as UCC staff or Joint Chiefs of Staff assignments, which are strictly controlled tour length rotations of duty. However, in the decades following enactment of Goldwater-Nichols, these JPME requirements have yet to come to overall fruition. This is particularly true in the case of senior naval officers, where sea duty/shore duty rotations and the culture of the naval service has often discounted PME and JPME as a measure of professional development for success. Although slowly changing, the JPME requirement still continues to be frequently waived in the case of senior admirals nominated for these positions.[22]

Each combatant command can be led by a general or flag officer from any of the military services. Most commands have traditional service affiliations, but in recent years, non-traditional appointments have become more common. EUCOM was traditionally an Army command with USAF generals on occasion, but was held by a Marine from 2003 through 2006. CENTCOM was traditionally an Army and Marine command but William J. Fallon, commander from 2007 through 2008, was a Navy admiral. PACOM has always been commanded by a Navy admiral due to the wide expanse of ocean, although Air Force generals have been nominated for the post. U.S. Atlantic Command (USACOM) was also a traditional Navy assignment until it was successively commanded by Marine, Army, and Air Force generals, thereby becoming the first to have had commanders from all four services (USACOM was redesignated as JFCOM in 1999).[23] CENTCOM and SOUTHCOM were traditionally Army general positions until the Marines received their first CinC assignments. This led the way for General Pace to become the first Vice Chairman of the Joint Chiefs of Staff and ultimately Chairman of the Joint Chiefs of Staff. CCDRs are strong candidates for either position.[citation needed] The two newest commands, AFRICOM and NORTHCOM, have had the fewest number of commanders, with all of AFRICOM's being Army and NORTHCOM's alternating between the Air Force and Navy, until its first Army commander, General Charles H. Jacoby, Jr., took command in August 2011.

Countries assigned to each Command