The Unified Modeling Language (UML) is a general-purpose, developmental, modeling language in the field of software engineering, that is intended to provide a standard way to visualize the design of a system.[1]

UML was originally motivated by the desire to standardize the disparate notational systems and approaches to software design developed by Grady Booch, Ivar Jacobson and James Rumbaugh at Rational Software in 1994–95, with further development led by them through 1996.[1]

In 1997 UML was adopted as a standard by the Object Management Group (OMG), and has been managed by this organization ever since. In 2005 the Unified Modeling Language was also published by the International Organization for Standardization (ISO) as an approved ISO standard.[2] Since then it has been periodically revised to cover the latest revision of UML.[3]

Though well-known and widely used in education and academic papers, as of 2013[update] UML is little-used in industry, and most such use is informal and ad hoc.[4] 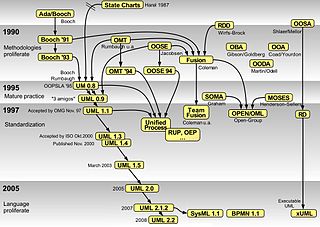 History of object-oriented methods and notation

UML has been evolving since the second half of the 1990s and has its roots in the object-oriented methods developed in the late 1980s and early 1990s. The timeline (see image) shows the highlights of the history of object-oriented modeling methods and notation.

It is originally based on the notations of the Booch method, the Object-modeling technique (OMT) and Object-oriented software engineering (OOSE), which it has integrated into a single language.[5]

Rational Software Corporation hired James Rumbaugh from General Electric in 1994 and after that the company became the source for two of the most popular object-oriented modeling approaches of the day:[6] Rumbaugh's Object-modeling technique (OMT) and Grady Booch's method. They were soon assisted in their efforts by Ivar Jacobson, the creator of the object-oriented software engineering (OOSE) method, who joined them at Rational in 1995.[1]

Under the technical leadership of those three (Rumbaugh, Jacobson and Booch), a consortium called the UML Partners was organized in 1996 to complete the Unified Modeling Language (UML) specification, and propose it to the Object Management Group (OMG) for standardisation. The partnership also contained additional interested parties (for example HP, DEC, IBM and Microsoft). The UML Partners' UML 1.0 draft was proposed to the OMG in January 1997 by the consortium. During the same month the UML Partners formed a group, designed to define the exact meaning of language constructs, chaired by Cris Kobryn and administered by Ed Eykholt, to finalize the specification and integrate it with other standardization efforts. The result of this work, UML 1.1, was submitted to the OMG in August 1997 and adopted by the OMG in November 1997.[1][7]

After the first release a task force was formed[1] to improve the language, which released several minor revisions, 1.3, 1.4, and 1.5.[8]

The standards it produced (as well as the original standard) have been noted as being ambiguous and inconsistent.[9][10]

The UML 2.0 major revision replaced version 1.5 in 2005, which was developed with an enlarged consortium to improve the language further to reflect new experience on usage of its features.[11]

There are four parts to the UML 2.x specification:

The Unified Modeling Language (UML) offers a way to visualize a system's architectural blueprints in a diagram (see image), including elements such as:[5]

UML is not a development method by itself;[17] however, it was designed to be compatible with the leading object-oriented software development methods of its time (for example OMT, Booch method, Objectory) and especially with RUP that it was originally intended to be used when work began at Rational Software Inc.

UML 2 has many types of diagrams which are divided into two categories.[5] Some types represent structural information, and the rest represent general types of behavior, including a few that represent different aspects of interactions. These diagrams can be categorized hierarchically as shown in the following class diagram:[5] 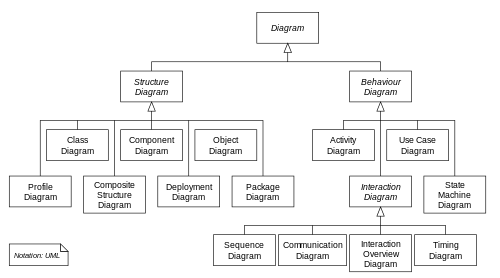 These diagrams may all contain comments or notes explaining usage, constraint, or intent.

Behavior diagrams emphasize what must happen in the system being modeled. Since behavior diagrams illustrate the behavior of a system, they are used extensively to describe the functionality of software systems. As an example, the activity diagram describes the business and operational step-by-step activities of the components in a system.

Interaction diagrams, a subset of behavior diagrams, emphasize the flow of control and data among the things in the system being modeled. For example, the sequence diagram which shows how objects communicate with each other in terms of a sequence of messages. 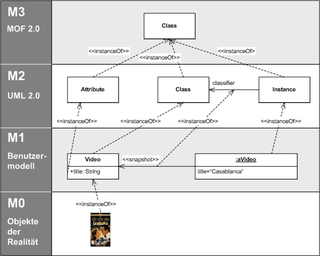 Illustration of the Meta-Object Facility

The most prominent example of a Layer 2 Meta-Object Facility model is the UML metamodel, the model that describes the UML itself. These M2-models describe elements of the M1-layer, and thus M1-models. These would be, for example, models written in UML. The last layer is the M0-layer or data layer. It is used to describe runtime instances of the system.[20]

The meta-model can be extended using a mechanism which is called stereotyping. This has been criticised as being insufficient/untenable by Brian Henderson-Sellers and Cesar Gonzalez-Perez in "Uses and Abuses of the Stereotype Mechanism in UML 1.x and 2.0".[21]

UML has been found useful in many design contexts.[16][22]

It has been treated, at times, as a design silver bullet, which has led to problems in its usage. Misuse of it includes excessive usage of it (design every little part of the system's code with it, which is unnecessary) and assuming that anyone can design anything with it (even those who haven't programmed).[23]

It is seen to be a large language, with many constructs in it. Some (including Jacobson) feel that there are too many and that this hinders the learning (and therefore usage) of it.[24]

Common criticisms of UML from industry include:[4]

Cardinality notation
As with database Chen, Bachman, and ISO ER diagrams, class models are specified to use "look-across" cardinalities, even though several authors (Merise,[25] Elmasri & Navathe[26] amongst others[27]) prefer same-side or "look-here" for roles and both minimum and maximum cardinalities. Recent researchers (Feinerer,[28] Dullea et. alia[29]) have shown that the "look-across" technique used by UML and ER diagrams is less effective and less coherent when applied to n-ary relationships of order >2.

Feinerer says "Problems arise if we operate under the look-across semantics as used for UML associations. Hartmann[30] investigates this situation and shows how and why different transformations fail." (Although the "reduction" mentioned is spurious as the two diagrams 3.4 and 3.5 are in fact the same) and also "As we will see on the next few pages, the look-across interpretation introduces several difficulties which prevent the extension of simple mechanisms from binary to n-ary associations."