Unified Sports Classification System of the USSR and Russia 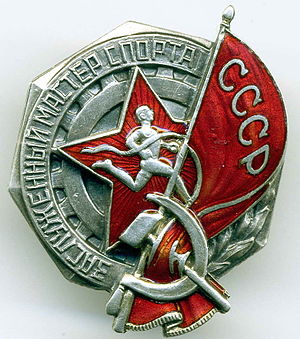 Badge of the Merited Master of Sport of the USSR title. Awarded to a Soviet boxer Victor Mikhailov in 1936

The classification was established in 1935 and was based on separate classifications, which existed for several sports disciplines before. Starting in 1949, it was revised every four years, the period, which corresponded to the Olympic cycle, to reflect new standards for the physical training. The document contained test standards, principles and conditions, necessary for the conferment of sports ranks and titles, for all sports, cultivated in the USSR. 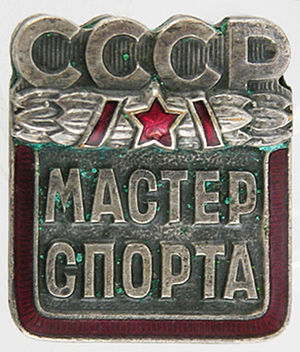 Badge Master of Sports of the USSR

As of the 1970s, there were following ranks for athletes of the USSR (listed in descending order of value):

Each of these titles was awarded only for results on the official competitions. Athletes who qualified for the rank were awarded a badge with serial number. 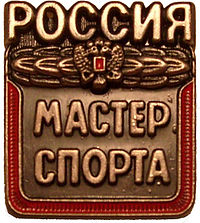 Badge of the Master of Sport of Russia title

This system was popular among Soviet satellite states and was used in Bulgaria, Czechoslovakia, East Germany, Poland, and Romania until the breakup of the USSR in 1991.[1] Russia continued the system, and former Soviet republics Belarus, Moldova, Kazakhstan, Kyrgyzstan, Tajikistan, Ukraine and Uzbekistan also maintain a similar or identical ranking system. In Albania, a similar system, the Sports titles one, was started in 1967.[2]

The title of Merited Master of Sport of the USSR was awarded to a handful of foreigners.

In 1972, to mark the 50th anniversary of the establishment of the Soviet Union, this title was awarded to the following prominent athletes from socialist nations:[6] 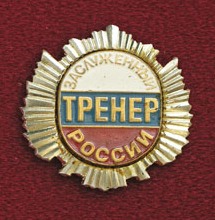 Badge for Merited Coach of Russia

The same system is in place today for most of the former Soviet republics as well. For example,

Since 2007, a few foreign coaches have been awarded the title of Merited Coach of Russia for their roles in securing Russian victories:

The title of Honored Judge of Russia may be given to sport judges and referees who have reached the level of "All-Russian Sports Official" and have distinguished careers of officiating to their credit.