From Infogalactic: the planetary knowledge core
(Redirected from Unintended consequence)
Jump to: navigation, search
This article is about the ethical concept. For the novel, see Unintended Consequences (novel). 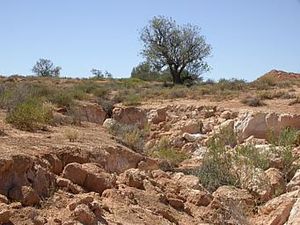 An erosion gully in Australia caused by rabbits. The release of rabbits in Australia for hunting purposes has had serious unintended ecological consequences.

In the social sciences, unintended consequences (sometimes unanticipated consequences or unforeseen consequences) are outcomes that are not the ones foreseen and intended by a purposeful action. The term was popularised in the twentieth century by American sociologist Robert K. Merton.[1]

Unintended consequences can be grouped into three types:

The idea of unintended consequences or accidents dates back at least to John Locke who discussed the unintended consequences of interest rate regulation in his letter to Sir John Somers, Member of Parliament.[2] The idea was also discussed by Adam Smith, the Scottish Enlightenment, and consequentialism (judging by results).[3] However, it was the sociologist Robert K. Merton who popularized this concept in the twentieth century.[1][4][5][6]

In his 1936 paper, "The Unanticipated Consequences of Purposive Social Action", Merton tried to apply a systematic analysis to the problem of unintended consequences of deliberate acts intended to cause social change. He emphasized that his term "purposive action... [is exclusively] concerned with 'conduct' as distinct from 'behavior.' That is, with action that involves motives and consequently a choice between various alternatives".[6] Merton also stated that "no blanket statement categorically affirming or denying the practical feasibility of all social planning is warranted."[7]

More recently, the law of unintended consequences has come to be used as an adage or idiomatic warning that an intervention in a complex system tends to create unanticipated and often undesirable outcomes.[8][9][10][11] Akin to Murphy's law, it is commonly used as a wry or humorous warning against the hubristic belief that humans can fully control the world around them.

Possible causes of unintended consequences include the world's inherent complexity (parts of a system responding to changes in the environment), perverse incentives, human stupidity, self-deception, failure to account for human nature, or other cognitive or emotional biases. As a sub-component of complexity (in the scientific sense), the chaotic nature of the universe—and especially its quality of having small, apparently insignificant changes with far-reaching effects (e.g., the butterfly effect)—applies.

Most modern technologies have negative consequences that are both unavoidable and unpredictable. For example, almost all environmental problems, from chemical pollution to global warming, are the unexpected consequences of the application of modern technologies. Traffic congestion, deaths and injuries from car accidents, air pollution, and even global warming are unintended consequences of the invention and large scale adoption of the automobile. Hospital infections are the unexpected side-effect of antibiotic resistance, and even human overpopulation is the side-effect of various technological (i.e., agricultural and industrial) revolutions.[57]

Because of the complexity of ecosystems, deliberate changes to an ecosystem or other environmental interventions will often have (usually negative) unintended consequences. Sometimes, these effects cause permanent irreversible changes. Examples include: