From Infogalactic: the planetary knowledge core
(Redirected from Unit of information)
Jump to: navigation, search

The most common units are the bit, the capacity of a system which can exist in only two states, and the byte (or octet), which is equivalent to eight bits. Multiples of these units can be formed from these with the SI prefixes (power-of-ten prefixes) or the newer IEC binary prefixes (binary power prefixes). Information capacity is a dimensionless quantity.[citation needed] 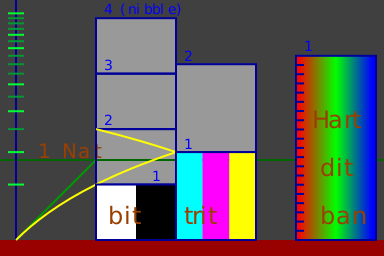 Comparison of units of information: bit, trit, nat, ban. Quantity of information is the height of bars. Dark green level is the "Nat" unit.

In 1928, Ralph Hartley observed a fundamental storage principle,[1] which was further formalized by Claude Shannon in 1945: the information that can be stored in a system is proportional to the logarithm logb N of the number N of possible states of that system. Changing the basis of the logarithm from b to a different number c has the effect of multiplying the value of the logarithm by a fixed constant, namely logc N = (logc b) logb N. Therefore, the choice of the basis b determines the unit used to measure information. In particular, if b is a positive integer, then the unit is the amount of information that can be stored in a system with b possible states.

When b is 2, the unit is the shannon, equal to the information content of one "bit" (a contraction of binary digit). A system with 8 possible states, for example, can store up to log28 = 3 bits of information. Other units that have been named include:

The trit, ban, and nat are rarely used to measure storage capacity; but the nat, in particular, is often used in information theory, because natural logarithms are sometimes more convenient than logarithms in other bases.

Several conventional names are used for collections or groups of bits.

Historically, a byte was the number of bits used to encode a character of text in the computer, which depended on computer hardware architecture; but today it almost always means eight bits — that is, an octet. A byte can represent 256 (28) distinct values, such as the integers 0 to 255, or -128 to 127. The IEEE 1541-2002 standard specifies "B" (upper case) as the symbol for byte. Bytes, or multiples thereof, are almost always used to specify the sizes of computer files and the capacity of storage units. Most modern computers and peripheral devices are designed to manipulate data in whole bytes or groups of bytes, rather than individual bits.

A group of four bits, or half a byte, is sometimes called a nibble or nybble. This unit is most often used in the context of hexadecimal number representations, since a nibble has the same amount of information as one hexadecimal digit.[6]

Computers usually manipulate bits in groups of a fixed size, conventionally called words. The number of bits in a word is usually defined by the size of the registers in the computer's CPU, or by the number of data bits that are fetched from its main memory in a single operation. In the IA-32 architecture more commonly known as x86-32, a word is 16 bits, but other past and current architectures use words with 8, 24, 32, 36, 56, 64, 80 bits or others.

Some machine instructions and computer number formats use two words (a "double word" or "dword"), or four words (a "quad word" or "quad").

In the past, uppercase K has been used instead of lowercase k to indicate 1024 instead of 1000. However, this usage was never consistently applied.

On the other hand, for external storage systems (such as optical disks), the SI prefixes were commonly used with their decimal values (powers of 10). There have been many attempts to resolve the confusion by providing alternative notations for power-of-two multiples. In 1998 the International Electrotechnical Commission (IEC) issued a standard for this purpose, namely a series of binary prefixes that use 1024 instead of 1000 as the main radix:[7]

The JEDEC memory standards however define uppercase K, M, and G for the binary powers 210, 220 and 230 to reflect common usage.[8]

Several other units of information storage have been named.[6]

Most of these names are jargon, obsolete, or used only in very restricted contexts.