From Infogalactic: the planetary knowledge core
Jump to: navigation, search
For the defunct American company with the same name, see United Aircraft.

UAC was created in February 2006 by Russian President Vladimir Putin.[how?] In October 2007 the Federal Financial Markets Service registered a primary issue of common shares for the United Aircraft Building Corporation. The issue included 96,724,000,000 shares priced at 1 RUB (US$0.04).[5] They also announced plans for a possible 10–15% share issue in 2008, planning to retain a 75% stake.[6] Currently, after placing 5 additional share issues, the Corporation's chartered capital amounts to 174.61 bln. RUB. The share of the Russian Federation in UAC’s chartered capital is 80.29%.

In December 2007, the second largest (and state-owned) Russian bank Vneshtorgbank (VTB) announced that it would sell its 5% share in EADS to UAC at market price.[7] Later that month VTB sold its share in EADS to the state-owned Russian Development Bank (VEB).[8] EADS already owns a 10% stake in Irkut which it plans to convert into UAC shares,[9] leading to EADS and UAC owning shares of each other.

UAC will realize seven projects proposed by the Russian aircraft industry, including the Sukhoi Superjet 100 (formerly the Russian Regional Jet) and a medium-range plane, MS-21 (by Irkut, Ilyushin and Tupolev).

United Aircraft Corporation has been described as one of the so-called national champions, large companies that are expected not only to seek profit but also to advance the interests of the nation.

The former Russian defence minister, now Deputy Prime Minister Sergei Ivanov had been appointed as chairman of the board of the directors of the company and Alexei Fyodorov was selected as president and chairman of the management board of the corporation. As of September 2013 the President of BoD is Vladimir Dmitriev - "Chairman" of Vnesheconombank. Starting 28 February 2011, Mikhail Pogosyan was appointed the President of UAC.

The holding encompasses Irkut[11] Mikoyan, Sukhoi, Ilyushin, Tupolev, Beriev and Yakovlev. It has also been recently announced that the TAPO factory, in Tashkent, Uzbekistan, may also become a subsidiary of the group.[citation needed] 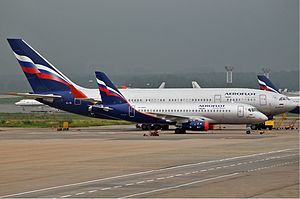