The United States Army Institute of Heraldry (TIOH) furnishes heraldic services to the U.S. Armed Forces and other U.S. government organizations, including the Executive Office of the President. The activities of the Institute encompass research, design, development, standardization, quality control, and other services relating to official symbolic items—seals, decorations, medals, insignia, badges, flags, and other items awarded to or authorized for official wear or display by government personnel and agencies. Limited research and information services concerning official symbolic items are also provided to the general public. The Institute of Heraldry is located at Fort Belvoir, a military installation within the metropolitan area of Washington, D.C. The staff consists of thirty-two civilians.

Heraldic and other military symbols have been used by the U.S. Armed Forces and government agencies since the beginning of the American Revolution, however, there was no co-ordinated military heraldry program until 1919, when an office within the United States Department of War staff was established to approve and co-ordinate the coats of arms and insignia of U.S. Army organizations. In 1924, formal staff responsibility for specific military designs was delegated to the Quartermaster General. As the needs for symbolism by the military services and the national government expanded, the scope of the services furnished by the Quartermaster General's Office evolved into the Heraldic Program.

The expansion of the Army during World War II, and the subsequent increased interest in symbolism, contributed to the growth of the Heraldic Program. It was further expanded by Pub.L. 85–263, approved September 1957, 71 Stat. 89, which delineated the authority of the Secretary of the Army to furnish heraldic services to the military departments and other branches of the federal government.

18 U.S.C. § 704 and the Code of Federal Regulations (32 CFR, Part 507) permit the Institute of Heraldry to issue directives on how military insignia are displayed, the criteria for issuance, and how insignia will be worn on military uniforms.

On 1960-08-10, Army General Order Number 29 placed the U.S. Army Institute of Heraldry under the control of the Quartermaster General. The Army Adjutant General’s office assumed responsibility of the Institute in 1962, when the Office of the Quartermaster General ceased existing because the Army reorganized. In 1987, another realignment subordinated the Institute to the U.S. Total Army Personnel Command (the U.S. Army Human Resources Command). In April 1994, the Institute of Heraldry moved from Cameron Station to Fort Belvoir, Virginia. In October 2004, another realignment assigned responsibility for the Heraldic Program to Office of the Administrative Assistant to the Secretary of the Army, part of the United States Army.

Coat of arms of the Institute 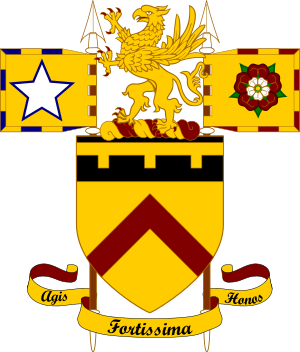 Blazon: Or a chevron Gules, on a chief Sable a label of the first.

The red chevron refers to the military (armed services) which supports and is under the civil jurisdiction of the federal government represented by the label, the three points alluding to the Executive, Legislative and Judicial branches.

The label also is indicative of The Institute of Heraldry being the direct descendant (offspring) of the heraldic activity initially created in 1919 under The General Staff, United States Army, in 1924 transferred to the Quartermaster General and in 1962 reassigned to The Adjutant General.

Furthermore, the label alludes to The Institute of Heraldry as being the only heraldic activity in the United States which is officially comparable to the heraldic institutions of the Old World and which continues the art and science of heraldry under its long established traditional and historic rules.

Blazon: On a wreath Or and Gules, a griffin salient of the first.

The griffin, a fabulous animal half eagle and half lion, is symbolic of wisdom and inspiration.

The role of the griffin as guardian of treasure is symbolic of the Institute's singular responsibility to safeguard the heraldic art of the federal government.

The eagle also alludes to the United States and the lion to Great Britain, the major source of US language, laws and heraldic knowledge.

Sinister: The red and white (Tudor) heraldic rose alludes to the first and permanent colonization of America by the English under the Tudors.

Gold is symbolic of achievement and honor, red of zeal, and black of jurisprudence and knowledge.

Blazon: Aegis fortissima honos (Honor is the Strongest Shield) on a scroll Or lined Sable with lettering of the last.