From Infogalactic: the planetary knowledge core
Jump to: navigation, search
"USBM" redirects here. For the music scene based in the United States, see black metal.

For most of the 20th century, the United States Bureau of Mines (USBM) was the primary United States government agency conducting scientific research and disseminating information on the extraction, processing, use, and conservation of mineral resources.

Founded on May 16, 1910, through the Organic Act (Public Law 179), to deal with a wave of catastrophic mine disasters, the mission of the Bureau of Mines expanded over the years to include:

From its creation, the USBM was viewed, both nationally and internationally, as the focal point for new and emerging science and technology in the minerals field. Since entering competition in 1978, the Bureau of Mines won 35 R&D 100 Awards, given annually by R&D Magazine for the 100 most important research innovations of the year. This achievement is especially impressive considering the small size of the Bureau's research budget, compared to those of competing organizations, such as E.I. du Pont de Nemours and Company, Westinghouse Electric Corporation, General Electric Company, Hitachi, Ltd., the Department of Energy, and the National Aeronautics and Space Administration (NASA).

"We leave knowing that the proud accomplishments of this agency did make a difference in the quality of life we now enjoy, and they will continue to do so well into the 21st century." — USBM Director Rhea Graham

In September 1995, Congress voted to close the Bureau of Mines and to transfer certain functions to other federal agencies. With USBM's closure, almost $100 million, or 66%, of its 1995 programs ceased, and approximately 1,000 of its employees were dismissed. Certain specific health, safety, and materials programs were transferred to the Department of Energy, and certain minerals information activities moved to the U.S. Geological Survey and the Bureau of Land Management. The Bureau's archive of mining maps was transferred to the National Mine Map Repository (NMMR), a part of the Office of Surface Mining (OSM). Closure of the Bureau of Mines, and the accompanying transfers of functions and employee layoffs were essentially complete in March 1996.

The Bureau's Minerals Information functions were transferred to the U.S. Geological Survey (USGS) in early 1996. The "Mineral Industry Surveys," "Mineral Commodity Summaries," and the "Minerals Yearbook" continued to be published. The Bureau's technical reports are archived by Technical Report Archive & Image Library

The Health and Safety Research Program at the Pittsburgh and Spokane Research Centers was assigned on an interim basis to DOE (Public Law 104-99). In fiscal year 1997, it was permanently transferred to the National Institute for Occupational Safety and Health (NIOSH) (Public Law 104-134). NIOSH is part of the Centers for Disease Control and Prevention within the Department of Health and Human Services. A total of 413 full-time equivalent employees were transferred to NIOSH on October 11, 1996—336 in Pittsburgh and 77 in Spokane. A position of Associate Director for Mining in the NIOSH headquarters office was created. Under NIOSH, the Pittsburgh and Spokane Research "Centers" were renamed the Pittsburgh Research Laboratory and Spokane Research Laboratory. Both labs currently reside under NIOSH's Office of Mine Safety and Health Research.

On May 28, 2010, Senator Jay Rockefeller (D-WV) released a list of proposed changes to mine safety laws including re-establishing the Bureau of Mines.[1] 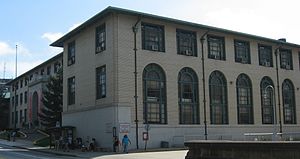 Former US Bureau of Mines Building in Pittsburgh.

Since its founding, the numerous accomplishments of the Bureau of Mines have included the identification and development of many new processes, including: