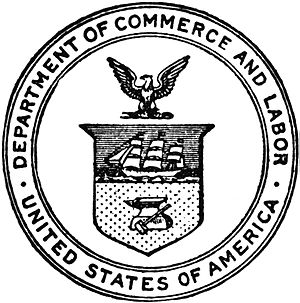 Seal of the U.S. Department of Commerce and Labor

It was created on February 14, 1903, during the administration of Theodore Roosevelt. Investigations were the province of its Bureau of Corporations. The department was renamed the Department of Commerce on March 4, 1913, and its bureaus and agencies specializing in labor were transferred to the new Department of Labor. The Bureau of Corporations was spun off as an independent agency in 1915, the Federal Trade Commission

In 2011, in response to federal budget-cutting efforts, Senator Richard Burr (R-NC), sponsored Senate Bill 1116, a proposal to re-combine two departments as the "Department of Commerce and the Workforce".[1] To date no action on this proposal has been taken beyond referral to committee.[2]