From Infogalactic: the planetary knowledge core
Jump to: navigation, search
For the earlier incarnation with the same name, established in 1867, see Office of Education.

The agency's official abbreviation is "ED", and not "DOE", which refers to the United States Department of Energy. It is also often abbreviated informally as "DoED".

A previous Department of Education was created in 1867 but was soon demoted to an Office in 1868.[3][4] As an agency not represented in the president's cabinet, it quickly became a relatively minor bureau in the Department of the Interior. In 1939, the bureau was transferred to the Federal Security Agency, where it was renamed the Office of Education. In 1953, the Federal Security Agency was upgraded to cabinet-level status as the Department of Health, Education, and Welfare.

Upgrading Education to cabinet level status in 1979 was opposed by many in the Republican Party, who saw the department as unconstitutional, arguing that the Constitution doesn't mention education, and deemed it an unnecessary and illegal federal bureaucratic intrusion into local affairs. However many liberals and Democrats see the department as constitutional under the Commerce Clause, and that the funding role of the Department is constitutional under the Taxing and Spending Clause. The National Education Association supported the bill, while the American Federation of Teachers opposed it.[6]

Unlike the systems of most other countries, education in the United States is highly decentralized, and the federal government and Department of Education are not heavily involved in determining curricula or educational standards (with the recent exceptions of the No Child Left Behind Act and the Common Core State Standards Initiative). This has been left to state and local school districts. The quality of educational institutions and their degrees is maintained through an informal private process known as accreditation, over which the Department of Education has no direct public jurisdictional control.

The Department's mission is: to promote student achievement and preparation for global competitiveness by fostering educational excellence and ensuring equal access.[13] Aligned with this mission of ensuring equal access to education, the Department of Education is a member of the United States Interagency Council on Homelessness,[14] and works with federal partners to ensure proper education for homeless and runaway youth in the United States.

Office of the Secretary (OS)

Office of the Under Secretary (OUS)

No Child Left Behind 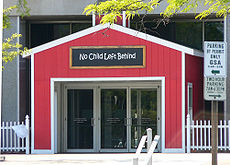 Under President George W. Bush, the Department primarily focused on elementary and secondary education, expanding its reach through the No Child Left Behind Act. The Department's budget increased by $14B between 2002 and 2004, from $46B to $60B.[16]

As with other federal agencies, the ED operates with the assistance of several advisory committees. The Federal Interagency Committee on Education (FICE) is known in higher education for originating the FICE code, the six-digit institutional identifier assigned to each higher education (two-year and above) institution.

The FICE code is a six-digit identification code that was used to identify all schools doing business with the Office of Education during the early sixties. This code is no longer used in IPEDS; it has been replaced by the Office of Postsecondary Education (OPE) ID code.[17]

Opposition to the Department of Education mainly stems from conservatives, who see the department as an undermining of states rights, and libertarians who believe it results in a state-imposed leveling towards the bottom and low value for taxpayers' money.[19]

The Republican Party platform of 1980 called for the elimination of the Department of Education created under Carter and President Ronald Reagan promised during the 1980 presidential election to eliminate it as a cabinet post,[20] but he was not able to do so with a Democratic House of Representatives. In the 1982 State of the Union Address, he pledged:

By 1984 the GOP had dropped the call for elimination from its platform, and with the election of President George H. W. Bush the Republican position evolved in almost lockstep with that of the Democrats, with Goals 2000 a virtual joint effort.

After the Newt Gingrich led "revolution" in 1994 had taken control of both Houses of Congress, federal control of and spending on education soared. That trend continued unabated despite the fact that the Republican Party made abolition of the Department a cornerstone of 1996 platform and campaign promises, calling it an inappropriate federal intrusion into local, state, and family affairs.[16] The GOP platform read:

(During his 1996 presidential run, Senator Bob Dole promised, "We're going to cut out the Department of Education."[21])

In 2000, the Republican Liberty Caucus passed a resolution to abolish the Department of Education.[22]

Abolition of the organization was not pursued under the George W. Bush administration, which made reform of federal education a key priority of the President's first term. In 2008 and 2012, presidential candidate Ron Paul campaigned in part on an opposition to the Department.[23]