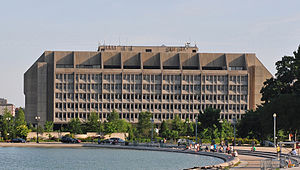 The HHS headquarters in Washington, D.C.

The Federal Security Agency (FSA) was established on July 1, 1939, under the Reorganization Act of 1939, P.L. 76-19. The objective was to bring together in one agency all Federal programs in the fields of health, education, and social security. The first Federal Security Administrator was Paul V. McNutt.[4]

The new agency originally consisted of the following major components:

When the war ended, President Truman moved to "strengthen the arm of the Federal Government for better integration of services in the fields of health, education, and welfare."

Unlike statutes authorizing the creation of other executive departments, the contents of Reorganization Plan No. 1 of 1953 were never properly codified within the United States Code, although Congress did codify a later statute ratifying the Plan. Today, the Plan is included as an appendix to Title 5 of the United States Code. The result is that HHS is the only executive department whose statutory foundation today rests on a confusing combination of several codified and uncodified statutes.[citation needed]

Department of Health, Education, and Welfare

The Department of Health, Education, and Welfare (HEW) was created on April 11, 1953, when Reorganization Plan No. 1 of 1953 became effective. HEW thus became the first new Cabinet-level department since the Department of Labor was created in 1913. The Reorganization Plan abolished the FSA and transferred all of its functions to the Secretary of HEW and all components of the Agency to the Department. The first Secretary of HEW was Oveta Culp Hobby, a native of Texas, who had served as Commander of the Women's Army Corps in World War II and was editor and publisher of the Houston Post. Sworn in on April 11, 1953, as Secretary, she had been FSA Administrator since January 21, 1953.

The six major program-operating components of the new Department were the Public Health Service, the Office of Education, the Food and Drug Administration, the Social Security Administration, the Office of Vocational Rehabilitation, and St. Elizabeth's Hospital. The Department was also responsible for three Federally-aided corporations: Howard University, the American Printing House for the Blind, and the Columbia Institution for the Deaf (Gallaudet College since 1954).[5]

Department of Health and Human Services

In 1995, the Social Security Administration was removed from the Department of Health and Human Services, and established as an independent agency of the executive branch of the United States Government.

HHS is administered by the Secretary of Health and Human Services, who is appointed by the President with the advice and consent of the Senate. The United States Public Health Service (PHS) is the main division of the HHS and is led by the Assistant Secretary for Health. The current Secretary, Sylvia Mathews Burwell, was sworn in on June 9, 2014.

The United States Public Health Service Commissioned Corps, the uniformed service of the PHS, is led by the Surgeon General who is responsible for addressing matters concerning public health as authorized by the Secretary or by the Assistant Secretary of Health in addition to his or her primary mission of administering the Commissioned Corps.

The Office of Inspector General (OIG) investigates criminal activity for HHS. The special agents who work for OIG have the same title series "1811", training and authority as other federal criminal investigators, such as the FBI, ATF, DEA and Secret Service. However, OIG Special Agents have special skills in investigating white collar crime related to Medicare and Medicaid fraud and abuse. Organized crime has dominated the criminal activity relative to this type of fraud.

HHS-OIG investigates tens of millions of dollars in Medicare fraud each year. In addition, OIG will continue its coverage of all 50 states and the District of Columbia by its multi-agency task forces (PSOC Task Forces) that identify, investigate, and prosecute individuals who willfully avoid payment of their child support obligations under the Child Support Recovery Act.

HHS-OIG agents also provide protective services to the Secretary of HHS, and other department executives as necessary.

In 2002, the department released Healthy People 2010, a national strategic initiative for improving the health of Americans.

With the passage of the Fraud Enforcement and Recovery Act of 2009 of 2009, and the Affordable Care Act of 2010, the Office of Inspector General has taken an emboldened stance against healthcare related non-compliance, most notably for violations of Stark Law and the Anti-Kickback Statute.[8]

In 2015, the OIG issued a fraud alert as a warning to hospitals and healthcare systems to monitor and comply with their physician compensation arrangements.[9]

Recent years have seen dramatic increases in both the number and the amounts of Stark Law violation settlements, prompting healthcare experts to identify a need for automated solutions that manage physician arrangements by centralizing necessary information with regard to physician-hospital integration.[8] Contract Management software companies such as Meditract provide options for health systems to organize and store physician contracts. Ludi Inc introduced DocTime Log®, an SaaS solution that specifically addresses this growing concern, automating physician time logging in compliance with contract terms to eliminate Stark Law and Anti-Kickback Statute violations.[10]

In June 2010 the Department of Health and Human Services created the Strengthening Communities Fund[11] as part of the American Recovery and Reinvestment Act. The fund was appropriated $50 million to be given as grants to organizations in the United States who were engaged in Capacity Building programs. The grants were given to two different types of capacity builders:

and building up nonprofit organization's abilities to tackle economic problems. State, Local and Tribal governments can receive up to $250,000 in two year grants 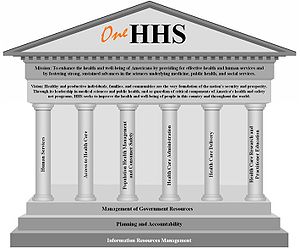 The Department of Health and Human Services was authorized a budget for Fiscal Year 2015 of $1.020 trillion. The budget authorization is broken down as follows:[14]

HHS.Gov provides complete details on current and historical budgets for that agency. Budgets for fiscal years prior to 2014 are archived by Archive-It as requested by HHS.

The Department of Health and Human Services' administers 115 programs across its 11 operating divisions.[15] Some highlights include:

The 2010 United States federal budget establishes a reserve fund of more than $630 billion over 10 years to finance fundamental reform of the health care system.[17]