From Infogalactic: the planetary knowledge core
(Redirected from United States House of Representatives elections in Ohio, 1958)
Jump to: navigation, search

The U.S. House election, 1958 was an election for the United States House of Representatives in 1958 which occurred in the middle of Dwight Eisenhower's second term.

The economy was suffering the Recession of 1958, which Democrats blamed on Eisenhower. The President's Republican Party lost 48 seats in this midterm election, increasing the Democratic Party's majority to a commanding level.[2] Another factor which may have contributed to the Democratic gains include public consternation over the launch of Sputnik and Cold War politics.

1 Increase is due to the admission of Alaska and Hawaii, whose seats were temporarily additional to the usual 435, until reapportionment following 1960. 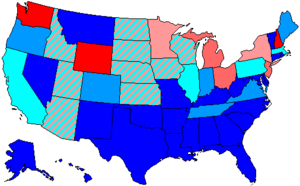 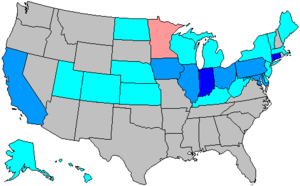 [Data unknown/missing. You can help!]

From the Wikipedia article of John H. Dent, regarding 21st district, Pennsylvania:

He was elected in 1958 as a Democrat to the 85th United States Congress, by special election, January 21, 1958, to fill the vacancy caused by the death of Augustine Kelley.

Texas eliminated its at-large district and added a new 22nd district formed from part of the Houston area 8th district.[3]

Washington redistricted its at-large seat into a 7th district formed in the Seattle suburbs designed to include the at-large incumbent Don Magnuson's residence.[3]