Its stated goals were:

In order to accomplish the advisory portion of its mission, the agency conducted research on foreign public opinion about the United States and its policies, in order to inform the president and other key policymakers.[8] The agency did this through public opinion surveys throughout the world. It then issued a variety of reports to government officials, including a twice-daily report on foreign media commentary around the world.[8] 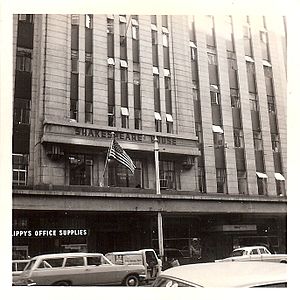 USIA library in Johannesburg, South Africa, in 1965, during the apartheid era.

From the beginning, Dwight Eisenhower said, “audiences would be more receptive to the American message if they were kept from identifying it as propaganda. Avowedly propagandistic materials from the United States might convince few, but the same viewpoints presented by the seemingly independent voices would be more persuasive”.[6] According to the Kennedy memorandum, the USIA utilized various forms of media, including "personal contact, radio broadcasting, libraries, book publication and distribution, press motion pictures, television, exhibits, English-language instruction, and others”. Through these different forms, the United States government was able to distribute and disguise the propaganda more easily and engage a greater concentration of people.[5]

Four main divisions existed at the beginning of the USIA's propaganda effort.[4] The first division dealt with broadcasting information both in the United States and around the world. One of the most widely used forms of media at the onset of the Cold War was the radio. The Smith-Mundt Act authorized information programs, including Voice of America.[9] Voice of America was intended as an unbiased and balanced "Voice from America" as originally broadcast during World War II. The VOA was used to "tell America's stories...to information deprived listeners behind the Iron Curtain”.[1] By 1967, the VOA was broadcasting in 38 languages to up to 26 million listeners.[5] In 1976 VOA gained its so-called "Charter" which required its news to be balanced.

The second division of the USIA consisted of libraries and exhibits. The Smith-Mundt Act and the Fulbright-Hays Act of 1961 both authorized the international cultural and educational exchanges (the Fulbright Scholarship Program). Thus "Fulbrighters" were grant recipients under the USIA educational and cultural exchange program. To ensure that those grant programs would be fair and unbiased, there were a series of grantees of educational and cultural expertise who chose the actual grantee recipients.

The USIA's third division included press services. Within its first two decades the "USIA publishe[d] sixty-six magazines, newspapers, and other periodicals, totaling almost 30 million copies annually, in twenty-eight languages”.[5] The fourth division dealt with the motion picture service. After the USIA's failed attempts to collaborate with Hollywood filmmakers to portray America in a positive light, the agency began producing their own documentaries.[1]

By the time of the agency's reorganization in 1999, the educational and informational efforts encompassed a wide range of activities, outside of broadcasting, focused in four areas:

The agency produced electronic and printed materials, most notably a product known as The Washington File information service, intended to provide, in the words of the agency "both time-sensitive and in-depth information in five languages", incorporation full transcripts of speeches, Congressional testimony, articles by Administration officials, and materials providing analysis of key issues. The Agency has also running a number of web sites to transmit information.[8]

Second, the agency ran a "Speakers and Specialists Program", sending Americans abroad for various public speaking and technical assistance roles.[8] These speakers were referred to as "American Participants" or "AmParts".

Third, the agency ran over 100 "Information Resource Centers" abroad, including some public-access libraries in developing countries.[8]

Finally, the USIA-operated foreign press centers in Washington, New York, and Los Angeles to "assist resident and visiting foreign journalists", while also working in cooperation with other international press centers in other major cities, such as Chicago, Houston, Atlanta, Miami, and Seattle.[8]

Additionally, beginning with the 1958 Brussels World Fair, the USIA was responsible for the design, construction, and operation of the U.S. pavilions representing America at major world Expos.[10]

The Foreign Affairs Reform and Restructuring Act of 1998, Division G of the Omnibus Consolidated and Emergency Supplemental Appropriations Act, 1999, Pub.L. 105–277, 112 Stat. 2681-761, enacted October 21, 1998, abolished the U.S. Information Agency effective October 1, 1999, when its information (but not broadcasting) and exchange functions were folded into the Department of State under the newly created Under Secretary of State for Public Affairs and Public Diplomacy.

At the time of its abolition, its budget was $1.109 billion. After reductions of staff in 1997, the agency had 6,352 employees, of which almost half were civil service employees in the United States (2,521). About 1,800 of these employees worked in international broadcasting, while approximately 1,100 focused on the agency's educational and informational programs, such as the Fulbright program.[8] Foreign service officers were also a significant portion of the work force (about 1,000).

Broadcasting functions, including Voice of America, Radio and TV Marti as well as other U.S. government-supported broadcasting, such as Radio Free Europe (in Eastern Europe) and Radio Liberty (in the former Soviet Union), were consolidated as an independent entity under the Broadcasting Board of Governors (BBG), which continues independently (as a separate entity from the State Department) today.