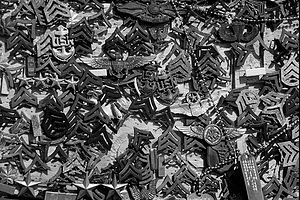 Various Marine and Navy rank insignia (as well as other devices) left at the summit of Mount Suribachi on Iwo Jima.

Warrant Officers provide leadership and training in specialized fields and skills. Unlike other nation's militaries (which rank warrant officers as Staff NCO equivalents), the United States military confers warrants and commissions on its Warrant Officers and classifies them into a separate category senior to all enlisted grades of rank (including officer candidates), cadets, and midshipmen. As Warrant Officers are officer-level technical specialists they generally do not exercise command outside of their specialty. Warrant officers come primarily from the Staff Non-Commissioned Officer (SNCO) ranks.

A Chief Warrant Officer, CWO2–CWO5, serving in the MOS 0306 "Infantry Weapons Officer" carries a special title, "Marine Gunner", which does not replace his rank. A Marine Gunner replaces the Chief Warrant Officer insignia on the left collar with a bursting bomb insignia. Other warrant officers are sometimes informally and erroneously referred to as "Gunner".

Enlisted Marines with paygrades of E-4 and E-5 are non-commissioned officers (NCOs) while those at E-6 and higher are Staff Noncommissioned Officers (SNCOs).[3] The E-8 and E-9 levels each have two ranks per pay grade, each with different responsibilities. Gunnery Sergeants (E-7) indicate on their annual evaluations (called "fitness reports") their preferred promotional track: Master Sergeant or First Sergeant. The First Sergeant and Sergeant Major ranks are command-oriented Senior Enlisted Advisors, with Marines of these ranks serving as the senior enlisted Marines in a unit, charged to assist the commanding officer in matters of discipline, administration, and the morale and welfare of the unit. Master Sergeants and Master Gunnery Sergeants provide technical leadership as occupational specialists in their specific MOS. First Sergeants typically serve as the senior enlisted Marine in a company, battery, or other unit at similar echelon, while Sergeants Major serve the same role in battalions, squadrons, or larger units.[citation needed]

Marines address all enlisted personnel by rank, and all Commissioned officers with "sir" or "ma'am". Warrant Officers, regardless of rank, are addressed just as commissioned officers, but may also be addressed as "Warrant Officer", or "Gunner", although the latter is sometimes considered improper unless the officer is an Infantry Weapons Officer (MOS 0306). During recruit training, recruits are indoctrinated to address all superiors as "sir" or "ma'am". Addressing a commissioned officer (or any rank) as "Mister" has long been considered a grievous insult towards the individual. The most junior ranks between pay grades E-1 and E-3 (Privates, Privates First Class, and Lance Corporals) are commonly referred to by their last name only, using their rank only in a formal situation. "Marine" is also a common form of address for junior Marines.

During recruit training, recruits are not considered Marines until they graduate and must address all Marines who have completed recruit training, including instructors, as "sir" or "ma'am". Incoming recruits must also refer to themselves in the third person (i.e. "this recruit"), and their rank is replaced with the word "Recruit". This usually continues until the last week of recruit training when, in most instances, recruits are then considered Marines. Likewise, during officer training, officer candidates are not yet commissioned Marine officers and must refer to themselves as "this candidate" or "the candidate", even though some officer candidates may hold an enlisted rank. During Officer Candidate School, each candidate is referred to as "candidate" and not "Marine". Unlike their enlisted counterparts, officer candidates refer to enlisted Marines, including their instructors, by their full and proper rank; only commissioned officers are addressed as "sir" or "ma'am".

Informally, some enlisted ranks have commonly used nicknames, though they are not official and may be improper for use in formal situations. The acceptability of nickname use by juniors is at the discretion of the individual rank holder. A Gunnery Sergeant is typically called "Gunny" and occasionally "Guns", a Master Sergeant is commonly called "Top", and a Master Gunnery Sergeant is "Master Gunny" or "Master Guns". Differing from the Army and Air Force, all ranks containing "Sergeant" are always addressed by their full rank and never shortened to simply "Sergeant" or "Sarge". A Private First Class is usually referred to as a PFC, instead of simply "private"; similarly, Lance Corporal is not shortened to "Corporal". Senior Officers may informally address junior officers by first name. Marines of the same rank may also address each other by first name when among peers only and never in the presence of junior or senior Marines.

Finally, Marines consider it a grievous insult to be called a "soldier", as soldier is an army-specific appellation, except in the Marine Corps nom de guerre "Soldier(s) of the Sea" or its variation "Sea Soldier(s)" and in the highly generic sense of referring to any member of the military, especially those members performing ground combat missions such as Navy SEALs and Air Force Special Operations and Security Forces personnel. Additionally, while Marines may, and are, collectively called troops, it is never appropriate to address Marines individually or collectively as either a "troop" or "trooper(s)", as these terms are only properly used by the army (originally in cavalry units but in modern use extended to armor and airborne/air assault units) and US state police forces; the proper term is always Marine. When writing journalism or scholarly references to the Marine Corps, its elements, and/or individual Marines, the correct attribution is Marine(s).