The 1996 United States Senate election in Alaska was held on November 5, 1996. Incumbent Republican United States Senator Ted Stevens ran for re-election to a fifth term in the United States Senate. Stevens faced off against Democratic nominee Theresa Obermeyer, a former member of the Anchorage School Board,[1] and Green Party nominee Jed Whittaker, a commercial fisherman.

The race drew national attention for Obermeyer's erratic behavior: she blamed Stevens for her husband's failure to pass the bar exam and contended that he had passed the bar by fraud. She "trailed" him to campaign events, frequently wearing a prisoner's outfit and once dragging a ball and chain behind her. During the campaign, she was arrested and served 30 days in prison in California and Oregon for probation violations.[2]

Stevens was re-elected in an overwhelming landslide and Whittaker finished ahead of Obermeyer. 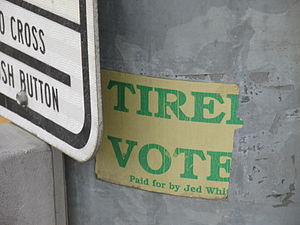