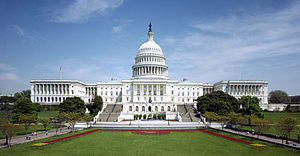 The United States Capitol, with the Senate chamber on the left, and the House on the right.

Conference committees operate after the House and the Senate have passed different versions of a bill. Conference committees exist to draft a compromise bill that both houses can accept. Both houses of Congress must eventually pass identical legislation for the bill to be presented to the President. (See U.S. Const., art I, sec. 7.) The two houses can reach that point through the process of amendments between Houses, where the House passes the Senate bill with a House amendment, or vice versa, but this process can be cumbersome. Thus, some bills pass both Houses through the use of a conference committee. (See Sen. Procedure, 449.)

The House and Senate may instruct conferees, but these instructions are not binding.

House and Senate rules forbid conferees from inserting in their report matter not committed to them by either House. (See House Rule XXII, Senate Rule XXVIII.) But conference committees sometimes do introduce new matter. In such a case, the rules of each House provide that a Member may object through a point of order, although each House has procedures under which it can vote to waive the point of order. The House provides a procedure by which the offending provision may be stricken from the bill. Formerly, the Senate required a Senator to object to the whole bill as reported by the conference committee. If the objection was well-founded, the Presiding Officer ruled, and a Senator could appeal the ruling of the Chair. If the appeal was sustained by a majority of the Senate, it had precedential effect, eroding the rule on the scope of conference committees. From fall 1996 through 2000, the Senate had no limit on the scope of conference reports, and some argued that the majority abused the power of conference committees. (See, e.g., Dauster, "Five-Man Senate?") In December 2000, the Senate reinstated the prohibition of inserting matters outside the scope of conference. (See Consolidated Appropriations for Fiscal Year 2001, Pub.L. 106–554, § 903 (2000), 114 Stat. 2763, 2763A-198.) The rule changed again with the Honest Leadership and Open Government Act (S. 1 of the 110th Congress), enacted in September 2007. Now any single Senator may raise a procedural objection, a point of order, against subject matter newly inserted by the conference committee without objecting to the rest of the bill. Proponents of the measure may move to waive the rule. The affirmative vote of 60 Senators is required to waive the rule. If the point of order is not waived and the Chair rules that the objection is well-founded, only the offending provision is stricken from the measure, and the Senate votes on sending the balance of the measure back to the House. (See Senate Rule XXVIII.)