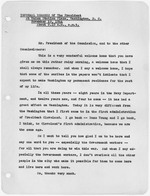 Remarks by FDR in 1944 at Union Station, thanking government workers for helping win the war

In the United States, the federal civil service was established in 1871. The Federal Civil Service is defined as "all appointive positions in the executive, judicial, and legislative branches of the Government of the United States, except positions in the uniformed services." (5 U.S.C. § 2101).[1] In the early 19th century, positions in the federal government were held at the pleasure of the president—a person could be fired at any time. The spoils system meant that jobs were used to support the American political parties, though this was gradually changed by the Pendleton Civil Service Reform Act of 1883 and subsequent laws. By 1909, almost two-thirds of the U.S. federal workforce was appointed based on merit, that is, qualifications measured by tests. Certain senior civil service positions, including some heads of diplomatic missions and executive agencies are filled by political appointees. Under the Hatch Act of 1939, civil servants are not allowed to engage in political activities while performing their duties.[2]

According to the Office of Personnel Management (OPM), as of December 2011, there were approximately 2.79 million civil servants (civilian, i.e. non-uniformed) employed by the US Government.[3][4][5] (This includes executive, legislative and judicial branches of government. This also includes more than 600,000 United States Postal workers.)

U.S. state and local government entities often have competitive civil service systems that are modeled on the national system, in varying degrees.

Employees in the civil services work under one of the independent agencies or one of the 15 executive departments.

There are also independent agencies such as the United States Postal Service, the National Aeronautics and Space Administration (NASA), the Central Intelligence Agency (CIA), the Environmental Protection Agency (EPA), and the United States Agency for International Development (USAID). In addition, there are government-owned corporations such as the Federal Deposit Insurance Corporation (FDIC) and the National Railroad Passenger Corporation.[6]

As of January 2009, the Federal Government, excluding the Postal Service and soldiers, employed about 2.0 million civilian workers. The Federal Government is the nation's single largest employer. Although most federal agencies are based in the Washington, D.C. region, only about 16% (or about 288,000) of the federal government workforce is employed in this region.[7]

The pay system of the United States government civil service has evolved into a complex set of pay systems that include principally the General Schedule (GS) for white-collar employees, Federal Wage System (FWS) for blue-collar employees, Senior Executive System (SES) for Executive-level employees, Foreign Service Schedule (FS) for members of the Foreign Service and more than twelve alternate pay systems that are referred to as alternate or experimental pay systems such as the first experimental system China Lake Demonstration Project. The current system began as the Classification Act of 1923[9] and was refined into law with the Classification Act of 1949. These acts that provide the foundation of the current system have been amended through executive orders and through published amendments in the Federal Register that sets for approved changes in the regulatory structure of the federal pay system. The common goal among all pay systems is to achieve the goal of paying equitable salaries to all involved workers regardless of system, group or classification. This is referred to as pay equity or ("equal pay for equal work"). Select careers in high demand may be subject to a special rate table,[10] which can pay above the standard GS tables. These careers include certain engineering disciplines and patent examiners.[11][12]

The General Schedule (GS) includes white collar workers at levels 1 through 15, most professional, technical, administrative, and clerical positions in the federal civil service. The Federal Wage System or Wage Grade (WG) schedule includes most federal blue-collar workers. As of September 2004[update], 71% of federal civilian employees were paid under the GS; the remaining 29% were paid under other systems such as the Federal Wage System for federal blue-collar civilian employees, the Senior Executive Service/Senior Level and the Executive Schedule for high-ranking federal employees, and the pay schedules for the United States Postal Service and the Foreign Service. In addition, some federal agencies—such as the United States Securities and Exchange Commission, the Federal Reserve System, and the Federal Deposit Insurance Corporation—have their own unique pay schedules.

All federal employees in the GS system receive a base pay that is adjusted for locality. Locality pay varies, but is at least 10% of base salary in all parts of the United States. The following salary ranges represent the lowest and highest possible amounts a person can earn, without earning over-time pay or receiving a merit-based bonus. Actual salary ranges differ (for instance a GS-9, step 1 in rural Arkansas may start at $46,625 versus $55,015 in San Jose, California), but all salaries lie within the parameters of the following ranges (effective January, 2012):[13]

Nineteen percent of federal employees earned salaries of $100,000 or more in 2009. The average federal worker's pay was $71,208 compared with $40,331 in the private sector, although under Office of Management and Budget Circular A-76, most menial or lower paying jobs have been outsourced to private contractors.[15] In 2010, there were 82,034 workers, 3.9% of the federal workforce, making more than $150,000 annually, compared to 7,240 in 2005.[16] GS salaries are capped by law so that they do not exceed the salary for Executive Schedule IV positions.[17] The increase in civil servants making more than $150,000 resulted mainly from an increase in Executive Schedule salary approved during the Administration of George W. Bush, which raised the salary cap for senior GS employees slightly above the $150,000 threshold.[18]

Public support in the United States for civil service reform strengthened following the assassination of President James Garfield.[20] The United States Civil Service Commission was created by the Pendleton Civil Service Reform Act, which was passed into law on January 16, 1883. The commission was created to administer the civil service of the United States federal government. The law required federal government employees to be selected through competitive exams and basis of merit;[20] it also prevented elected officials and political appointees from firing civil servants, removing civil servants from the influences of political patronage and partisan behavior.[20][21] However, the law did not apply to state and municipal governments.

The United States Civil service exams have since been abolished for many positions, since statistics show that they do not accurately allow hiring of minorities according to the affirmative action guidelines.[22]

This act abolished the United States Civil Service Commission and created the U.S. Office of Personnel Management (OPM), the Federal Labor Relations Authority (FLRA) and the U.S. Merit Systems Protection Board (MSPB). OPM primarily provides management guidance to the various agencies of the executive branch and issues regulations that control federal human resources. FLRA oversees the rights of federal employees to form collective bargaining units (unions) and to engage in collective bargaining with agencies. MSPB conducts studies of the federal civil service and mainly hears the appeals of federal employees who are disciplined or otherwise separated from their positions. This act was an effort to replace incompetent officials. [23]