From Infogalactic: the planetary knowledge core
(Redirected from United States occupation of the Dominican Republic (1965–66))
Jump to: navigation, search
For the earlier civil wars, see Dominican Civil War (1911–12) and Dominican civil war of 1914.

The Dominican Civil War (Spanish: Guerra Civil Dominicana) took place between April 24, 1965, and September 3, 1965, in Santo Domingo, Dominican Republic. It started when civilian and military supporters of constitutionally elected former President Juan Bosch overthrew acting President Donald Reid Cabral. The coup prompted General Elías Wessin y Wessin to organise elements of the military loyal to President Reid, known as loyalists, initiating an armed campaign against the so-called constitutionalist rebels. Allegations of foreign support for the rebels led to an American intervention in the conflict, which later transformed into an Organization of American States occupation of the country. Elections were held in 1966, in the aftermath of which Joaquín Balaguer was elected into the presidential seat. Later in the same year international troops departed from the country. 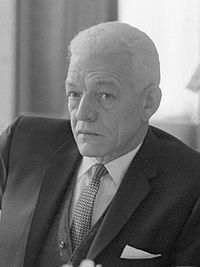 On 19 November 1911, General Luis Tejera led a group of conspirators in an ambush on the horse-drawn carriage of Dominican President Ramón Cáceres. During the shootout, Cáceres was killed and Tejera wounded in the leg. In the ensuing power vacuum, General Alfredo Victoria, commander of the army, seized control and forced the Congress to elect his uncle, Eladio Victoria, as the new president. The general was widely suspected of bribing the Congress, and his uncle, who took office on 27 February 1912, lacked legitimacy. The former president Horacio Vásquez soon returned from exile to lead his followers, the horacistas, in a popular uprising against the new government.[5]

The result was several years of great political instability and civil war. U.S. mediation by the William Howard Taft and Woodrow Wilson administrations achieved only a short respite each time. A political deadlock in 1914 was broken after an ultimatum by Wilson telling Dominicans to choose a president or see the U.S. impose one. A provisional president was chosen, and later the same year relatively free elections put former president (1899–1902) Juan Isidro Jimenes Pereyra back in power. To achieve a more broadly supported government, Jimenes named opposition individuals to his Cabinet. But this brought no peace and, with his former Secretary of War Desiderio Arias maneuvering to depose him and despite a U.S. offer of military aid against Arias, Jimenes resigned on May 7, 1916.[6]

Wilson thus ordered the U.S. occupation of the Dominican Republic. U.S. Marines landed on May 16, 1916, and had control of the country two months later. The military government established by the U.S., led by Rear Admiral Harry Shepard Knapp, was widely repudiated by Dominicans, with many factions within the country leading guerrilla campaigns against U.S. forces.[6] The occupation regime kept most Dominican laws and institutions and largely pacified the general population. The occupying government also revived the Dominican economy, reduced the nation's debt, built a road network that at last interconnected all regions of the country, and created a professional National Guard to replace the warring partisan units.[6]

Vigorous opposition to the occupation continued, nevertheless, and after World War I it increased in the U.S. as well. There, President Warren G. Harding (1921–23), Wilson's successor, worked to put an end to the occupation, as he had promised to do during his campaign. The U.S. government's rule ended in October 1922, and elections were held in March 1924.[6] The victor was former president (1902–03) Horacio Vásquez Lajara, who had cooperated with the U.S. He was inaugurated on July 13, and the last U.S. forces left in September. Vásquez gave the country six years of stable governance, in which political and civil rights were respected and the economy grew strongly, in a relatively peaceful atmosphere.[6][7]

A rebellion (or coup d'état[8][9]) against President Horacio Vásquez broke out in February 1930 in Santiago. Rafael Trujillo secretly cut a deal with rebel leader Rafael Estrella Ureña; in return for Trujillo letting Estrella take power, Estrella would allow Trujillo to run for president in new elections. As the rebels marched toward Santo Domingo, Vásquez ordered Trujillo to suppress them. However, feigning "neutrality", Trujillo kept his men in barracks, allowing Estrella's rebels to take the capital virtually unopposed. On March 3, Estrella was proclaimed acting president, with Trujillo confirmed as head of the police and of the army. As per their agreement, Trujillo became the presidential nominee of the newly formed Patriotic Coalition of Citizens (Spanish: Coalición patriotica de los ciudadanos), with Estrella as his running mate.[10] The other candidates became targets of harassment by the army, and withdrew when it became apparent that Trujillo would be the only person who would be allowed to effectively campaign. Ultimately, the Trujillo-Estrella ticket was proclaimed victorious with an implausible 99 percent of the vote. According to the American ambassador, Trujillo received more votes than actual voters.[11]

On May 30, 1961 Trujillo was shot and killed when his blue 1957 Chevrolet Bel Air was ambushed on a road outside the Dominican capital.[12] He was the victim of an ambush plotted by a number of men, among them General Juan Tomás Díaz, Antonio de la Maza, Amado García Guerrero, and General Antonio Imbert Barrera.[13]

The country came under the rule of military junta until 1963, when democratic elections were organised with the aid of the United States. Juan Emilio Bosch Gaviño emerged victorious in the elections, assuming office. Bosch then tried to implement a number of social democratic reforms, causing the anger of the clergy, business magnates and members of the army, who initiated a rumor campaign accusing Bosch of being a communist. On 25 September 1963, a group of 25 senior military commanders led by Elías Wessin y Wessin expelled Bosch from the country and instated Donald Reid Cabral as the new president. The newly installed president failed to gather popular support, at the same time several factions prepared to launch coups. Those included Constitutionalists under Bosch, a group inside the Dominican army under Peña Taveras, supporters of former Dominican Revolutionary Party leader Nicolás Silfa and plotters siding with Joaquín Balaguer.[14]

A Universal Newsreel about the U.S. invasion. 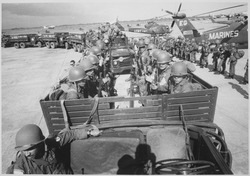 On 24 April 1965, three junior officers requested a meeting with President Donald Cabral Reid. Reid revoked the commission after receiving news of a suspected anti-government plot. When Chief of staff Riviera Cuesta was instead sent to discuss with the officers at the 16 of August military camp, he was immediately detained. A group of military constitutionalists and Dominican Revolutionary Party (DRP) supporters then seized the Radio Santo Domingo building, issuing calls of sedition, at the same time constitutionalist officers distributed weapons and molotov cocktails to their civilian comrades. The transmissions prompted the garrison of the 27 of February camp and a unit of the Dominican Navy's frogmen to defect. Large numbers of police officers abandoned their positions and changed into civilian clothing.[2]

The following day President Reid appointed general Wessin y Wessin as the new chief of staff, Wessin rallied the government troops, branding them Loyalists and announcing his plans of suppressing the rebellion. At 10:30 am rebels stormed the presidential palace, arresting Reid. Several hours later four loyalist P-51 Mustangs conducted aerial bombings of the National Palace and other constitutionalist positions, one plane was shot down during the incident. A single loyalist gunboat situated on river Ozama also bombarded the palace. Fearing a mob that had gathered at the palace would lynch Reid, rebel commander Francisco Caamaño allowed him to escape, as Reid had already lost the support of the loyalists. The majority of the DRP leadership fled the capital, while constitutionalists mobilized a total of 5,000 armed civilians and 1,500 members of the military.[2][14]

On 26 April, José Rafael Molina Ureña was declared provisional president while at the same time large crowds gathered in the streets demanding Bosch's return from exile. In the meantime U.S. diplomats situated in Santo Domingo initiated preparations for the evacuation of 3,500 U.S. citizens living in the city. In the early morning of 27 April, 1,176 foreign civilians who had previously assembled in Hotel Embajador were airlifted to the Bajos de Haina naval facility, where they boarded USS Ruchamkin, USS Wood County as well as the helicopters of HMM-264 which evacuated them from the island to USS Boxer and USS Raleigh. Later in the day, 1,500 loyalist troops supported by armored cars and tanks marched from the San Isidro Air Base, capturing the Duarte bridge and taking position on the west bank of the Ozama river. A second force consisting of 700 soldiers left San Cristóbal and attacked the western suburbs of Santo Domingo. Rebels overran the Fortaleza Ozama police headquarters, taking 700 prisoners. On 28 April, armed civilians attacked the Villa Consuelo police station, executing all the police officers who survived the initial skirmish. One U.S. Marine battalion landed in Haina, later moving to Hotel Embajador where it provided assistance in the upcoming airlifts. During the night, 684 civilians were airlifted to USS Boxer. One U.S. Marine was killed by a rebel sniper during the operation.[2] 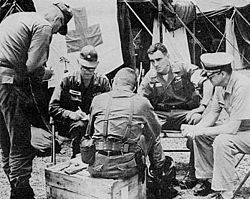 On 29 April, American ambassador to the Dominican Republic William Tapley Bennett, who had previously sent numerous reports to President Lyndon Johnson, reported that the situation had reached life-threatening proportions for U.S. citizens and that the rebels received foreign support. Bennett stressed that the United States must act immediately as the creation of an international coalition would be time consuming. Contrary to the suggestions of his advisers, Johnson authorised the transformation of evacuation operations into a large scale military intervention through Operation Power Pack, aiming to prevent the development of what he saw as a second Cuban Revolution.[2][14][15]

At 2:16 am on 30 April 1965, the 3rd Brigade of the 82nd Airborne Division landed at the San Isidro Air Base, beginning the American military intervention in the conflict. During the next couple of hours, two brigade combat teams and heavy equipment were also dispatched. At sunrise the 1st Battalion, 508th Infantry Regiment moved up the San Isidoro highway, securing a position east of the Duarte bridge. The 1st Battalion 505th Infantry Regiment remained at the airbase and sent out patrols to the perimeter. A force of 1,700 Marines of the 6th Marine Expeditionary Unit occupied an area containing a number of foreign embassies, the locale was proclaimed an International Security Zone by the Organization of American States (OAS). Earlier in the day, OAS also issued a resolution calling the combatants to end all hostilities. At 16:30 hrs, representatives of the loyalists, the rebels and the U.S. military signed a cease fire which would take effect at 23:45 hrs. The treaty's timing favored the demoralized loyalists, who had at that point lost control of Ciudad Colonial.[2][16]

On 5 May, the OAS Peace Committee arrived in Santo Domingo, a second definite cease fire agreement was then signed ending the main phase of the civil war. Under the Act of Santo Domingo, OAS was tasked with overseeing the implementation of the peace deal as well as distributing food and medication through the capital. The treaties failed to fully prevent violations such as small scale firefights and sniper fire. A day later OAS members established the Inter-American Peace Force (IAPF) with the goal of serving as a peacekeeping formation in the Dominican Republic. IAPF consisted of 1,748 Brazilian, Paraguayan, Nicaraguan, Costa Rican, Salvadoran and Honduran troops and was headed by Brazilian general Hugo Panasco Alvim, with Bruce Palmer serving as his deputy commander.[1][16]

On 26 May, U.S. forces began gradually withdrawing from the island. The first post war elections were held on 1 July 1966, pitting Reformist Party candidate Joaquín Balaguer against former president Juan Emilio Bosch Gaviño. Balaguer emerged victorious in the elections, after building his campaign on promises of reconciliation. On 21 September 1966, the last OAS peacekeepers withdrew from the island, ending the foreign intervention in the conflict.[1][14]