The United States presidential election of 1864 was the 20th quadrennial presidential election, held on Tuesday, November 8, 1864. Incumbent president, Republican Abraham Lincoln, was running for re-election against Democratic candidate George B. McClellan, who ran as the "peace candidate" without personally believing in his party's platform.

Lincoln was re-elected president by a landslide in the Electoral College. Since the election of 1860, the Electoral College had expanded with the admission of Kansas, West Virginia, and Nevada as free-soil states. As the American Civil War was still raging, no electoral votes were counted from any of the eleven Southern states.[2] Lincoln won by more than 400,000 popular votes in part due to the Union's victory at the Battle of Atlanta.[3] Lincoln was the first president to be re-elected since Democrat Andrew Jackson in 1832. Lincoln was inaugurated for his second term on March 4, 1865, but he was assassinated on April 15, 1865, one month after his term began.

The Presidential election of 1864 took place during the American Civil War.[4]

A group of Republican dissidents calling themselves Radical Republicans, formed a party called the Radical Democracy Party and nominated John C. Frémont as their candidate for president. Frémont later withdrew and endorsed Lincoln. In the Border States, War Democrats joined with Republicans as the National Union Party, with Lincoln at the head of the ticket.[5] The National Union Party was a temporary name used to attract War Democrats and Border State Unionists who would not vote for the Republican Party. It faced off against the regular Democratic Party, including Peace Democrats.

The 1864 presidential election conventions of the parties are considered below in order of the party's popular vote. 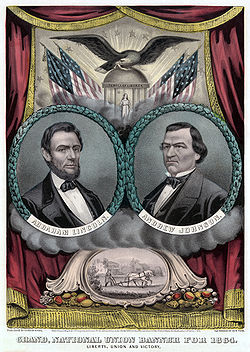 The Temporary Split in the Republican Party

As the Civil War progressed, political opinions within the Republican Party began to diverge. Senators Charles Sumner and Henry Wilson of Massachusetts wanted the Republican Party to advocate constitutional amendments to prohibit slavery and to guarantee racial equality before the law. These bills were not yet supported by all northern Republicans.

Before the election, some War Democrats joined the Republicans to form the National Union Party.[6] With the outcome of the Civil War still in doubt, some political leaders, including Salmon P. Chase, Benjamin Wade, and Horace Greeley, opposed Lincoln's renomination on the grounds that he could not win. Chase himself became the only candidate to actively contest Lincoln's re-nomination, but withdrew in March when a slew of Republican officials, including within the state of Ohio upon whom Chase's campaign depended, endorsed Lincoln's renomination. Lincoln was still popular with most members of the Republican Party, and the National Union Party nominated him for a second term as president at their convention in Baltimore, Maryland, on June 7–8, 1864.[7] The party platform:

...called for pursuit of the war until the Confederacy surrendered unconditionally; a constitutional amendment for the abolition of slavery; aid to disabled Union veterans; continued European neutrality; enforcement of the Monroe Doctrine; encouragement of immigration; and construction of a transcontinental railroad. It also praised the use of black troops and Lincoln's management of the war.[8]

Andrew Johnson, the former Senator from and current Military Governor of Tennessee, was named as Lincoln's running-mate. Others who were considered for the position, at one point or another, were former Senator Daniel Dickinson, Major General Benjamin Butler, Major General William Rosecrans, Joseph Holt, and former Treasury Secretary and Senator John Dix. 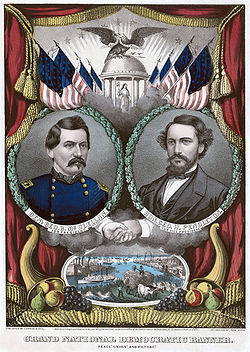 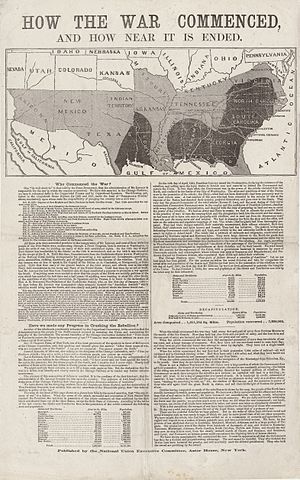 "How the War Commenced and How Near It Is Ended" published by the National Union Executive Committee.

The Democratic Party was bitterly split between War Democrats and Peace Democrats, who further divided among competing factions. Moderate Peace Democrats who supported the war against the Confederacy, such as Horatio Seymour, were preaching the wisdom of a negotiated peace. After the Battle of Gettysburg, when it was clear the South could no longer win the war, moderate Peace Democrats proposed a negotiated peace that would secure Union victory. They believed this was the best course of action, because an armistice could finish the war without devastating the South.[9] Radical Peace Democrats known as Copperheads, such as Thomas H. Seymour, declared the war to be a failure and favored an immediate end to hostilities without securing Union victory.[10]

George B. McClellan vied for the presidential nomination. Additionally, friends of Horatio Seymour insisted on placing his name before the convention, which was held in Chicago, Illinois, on August 29–31, 1864. But on the day before the organization of that body, Horatio Seymour announced positively that he would not be a candidate.

Since the Democrats were divided by issues of war and peace, they sought a strong candidate who could unify the party. The compromise was to nominate pro-war General George B. McClellan for president and anti-war Representative George H. Pendleton for vice-president. McClellan, a War Democrat, was nominated over the Copperhead Thomas H. Seymour. Pendleton, a close associate of the Copperhead Clement Vallandigham, balanced the ticket, since he was known for having strongly opposed the Union war effort.[11] The convention then adopted a peace platform[12] — a platform McClellan personally rejected.[13] McClellan supported the continuation of the war and restoration of the Union, but the party platform, written by Vallandigham, opposed this position. 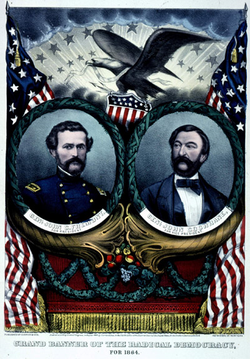 The Radical Democracy Convention assembled in Ohio with delegates arriving on May 29, 1864. The New York Times reported that the hall which the convention organizers had planned to use had been double-booked by an opera troupe. Almost all delegates were instructed to support Frémont, with a major exception being the New York delegation, which was composed of War Democrats who supported Ulysses S. Grant. Various estimates of the number of delegates were reported in the press; the New York Times reported 156 delegates, but the number generally reported elsewhere was 350 delegates. The delegates came from 15 states and the District of Columbia. They adopted the name "Radical Democracy Party."[14]

A supporter of Grant was appointed chairman. The platform was passed with little discussion, and a series of resolutions that bogged down the convention proceedings were voted down decisively. The convention nominated Frémont for president, and he accepted the nomination on June 4, 1864. In his letter, he stated that he would step aside if the National Union Convention would nominate someone other than Lincoln. John Cochrane was nominated for vice-president.[15]

The 1864 election was the first time since 1812 that a presidential election took place during a war.

For much of 1864, Lincoln himself believed he had little chance of being re-elected. Confederate forces had triumphed at the Battle of Mansfield, the Battle of the Crater, and the Battle of Cold Harbor. In addition, the war was continuing to take a very high toll in terms of casualties. The prospect of a long and bloody war started to make the idea of "peace at all cost" offered by the Copperheads look more desirable. Because of this, McClellan was thought to be a heavy favorite to win the election. Unfortunately for Lincoln, Frémont's campaign got off to a good start.

Secondly, the Democratic National Convention influenced Frémont's campaign. Frémont was appalled at the Democratic platform, which he described as "union with slavery." After three weeks of discussions with Cochrane and his supporters, Frémont withdrew from the race in September 1864. In his statement, Frémont declared that winning the Civil War was too important to divide the Republican vote. Although he still felt that Lincoln was not going far enough, the defeat of McClellan was of the greatest necessity. General Cochrane, who was a War Democrat, agreed and withdrew with Frémont. Frémont also brokered a political deal in which Lincoln removed U.S. Postmaster General Montgomery Blair from office. McClellan's chances of victory faded after Frémont withdrew from the presidential race.

Results by county explicitly indicating the percentage of the winning candidate in each county. Shades of red are for Lincoln (National Union) and shades of blue are for McClellan (Democratic).

Lastly, with the fall of Atlanta on September 2, there no longer was any question that a Union military victory was inevitable and close at hand.

In the end, the Union Party mobilized the full strength of both the Republicans and the War Democrats under the its slogan "Don't change horses in the middle of a stream." It was energized as Lincoln made emancipation the central issue, and state Republican parties stressed the perfidy of the Copperheads.[16]

Only 25 states participated in the election, since 11 Southern states had declared secession from the Union and formed the Confederacy. Three new states participated for the first time: Kansas, West Virginia, and Nevada. The reconstructed portions of Tennessee and Louisiana chose presidential electors, although Congress did not count their votes.

(a) The states in rebellion did not participate in the election of 1864.
(b) The Electors from Tennessee and Louisiana were Rejected. Were they not rejected, Lincoln would have garnered 229 Electoral votes, there would have been a total of 250 possible electoral votes, and the requirement to win would have been raised to 126.
(c) One Elector from Nevada did not vote

States with close margins of victory

States in red were won by Republican Abraham Lincoln; states in blue were won by Democrat George B. McClellan.

Below are the states where the margin of victory was under 5%. These closely won states totaled 68 electoral votes: