The United States presidential election of 1888 was the 26th quadrennial presidential election, held on Tuesday, November 6, 1888. It saw Grover Cleveland of New York, the incumbent president and a Democrat, try to secure a second term against the Republican nominee Benjamin Harrison, a former U.S. Senator from Indiana. The economy was prosperous and the nation was at peace, but Cleveland lost re-election in the Electoral College, even though he won a plurality of the popular vote by a narrow margin.

Tariff policy was the principal issue in the election. Harrison took the side of industrialists and factory workers who wanted to keep tariffs high, while Cleveland strenuously denounced high tariffs as unfair to consumers. His opposition to Civil War pensions and inflated currency also made enemies among veterans and farmers. On the other hand, he held a strong hand in the South and border states, and appealed to former Republican Mugwumps.

Harrison swept almost the entire North and Midwest (losing only Connecticut and New Jersey), and narrowly carried the swing states of New York (Cleveland's home state) and Indiana (Harrison's home state) by a margin of 1% or less to achieve a majority of the electoral vote. Unlike the election of 1884, the power of the Tammany Hall political machine in New York City helped deny Cleveland the electoral votes of his home state.

This election was notable for being the third of four U.S. presidential elections in which the winner did not win the popular vote. The first, in 1824, saw John Quincy Adams elected by the House. The second occurred just 12 years earlier in 1876, while the fourth would occur 112 years later in 2000.[2] It is also notable because only two states (New York and Indiana) switched parties in the electoral vote in comparison to the preceding election. It would not be until the election of 2012 that only two states (Indiana and North Carolina) would switch parties in consecutive elections. 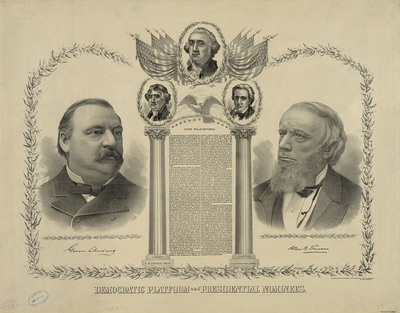 The Democratic National Convention held in St. Louis, Missouri, on June 5–7, 1888, was harmonious. Incumbent President Cleveland was re-nominated unanimously without a formal ballot. This was the first time an incumbent Democratic president had been re-nominated since Martin Van Buren in 1840.

After Cleveland was re-nominated, Democrats had to choose a replacement for Thomas A. Hendricks. Hendricks ran unsuccessfully as the Democratic nominee for vice-president in 1876, but won the office when he ran again with Cleveland in 1884. Hendricks served as vice-president for only eight months before he died in office on November 25, 1885. Former Senator Allen G. Thurman of Ohio was nominated for vice-president over Isaac P. Gray, his nearest rival, and John C. Black, who trailed behind. Gray lost the nomination to Thurman primarily because his enemies brought up his actions while a Republican.[3]

The Democratic platform largely confined itself to a defense of the Cleveland administration, supporting reduction in the tariff and taxes generally as well as statehood for the western territories.

The Republican candidates were former Senator Benjamin Harrison of Indiana; Senator John Sherman of Ohio; Russell A. Alger, the former governor of Michigan; Walter Q. Gresham of Indiana, the former Secretary of the Treasury; Senator William B. Allison of Iowa; and Chauncey Depew of New York, the president of the New York Central Railroad.

By the time Republicans met in Chicago on June 19–25, 1888, frontrunner James G. Blaine had withdrawn from the race because he believed that only a harmonious convention would produce a Republican candidate strong enough to upset incumbent President Cleveland. Blaine realized that the party was unlikely to choose him without a bitter struggle. After he withdrew, Blaine expressed confidence in both Benjamin Harrison and John Sherman. Harrison was nominated on the eighth ballot.

The Republicans chose Harrison because of his war record, his popularity with veterans, his ability to express the Republican Party's views, and the fact that he lived in the swing state of Indiana. The Republicans hoped to win Indiana's 15 electoral votes, which had gone to Cleveland in the previous presidential election. Levi P. Morton, a New York City banker, was nominated for vice-president over William Walter Phelps, his nearest rival.

The 5th Prohibition Party National Convention assembled in Tomlinson Hall in Indianapolis, Indiana. There were 1,029 delegates from all but three states.[citation needed]

The Prohibition ticket went on to capture a quarter-million popular votes as the prohibition movement gained steam.[citation needed] 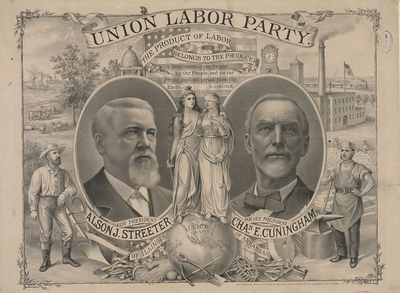 The United Labor Party held its national convention in Cincinnati at the same time. An attempt to nominate a joint ticket failed.

The convention nominated Alson Streeter for president unanimously. Samuel Evans was nominated for Vice President but declined the nomination. Charles E. Cunningham was later selected as the vice-presidential candidate.

The convention was held at the same time and city as the Union Labor Party. An effort to run a joint ticket failed.[citation needed]

The United Labor Party convention nominated Robert H. Cowdrey for president on the first ballot. W.H.T. Wakefield of Kansas was nominated for vice-president over Victor H. Wilder of New York by a margin of 50–12.[4]

The Greenback Party was in decline throughout the entire Cleveland administration. In the election of 1884, the party failed to win any House seats outright, although they did win one seat in conjunction with Plains States Democrats (James B. Weaver) and a handful of other seats by endorsing the Democratic nominee. In the election of 1886, only two dozen Greenback candidates ran for the House, apart from another six who ran on fusion tickets. Again, Weaver was the party's only victor. Much of the Greenback news in early 1888 took place in Michigan, where the party remained active.

With the failure of the convention, the Greenback Party ceased to exist.[5]

The American Party held its third and last National Convention in Grand Army Hall in Washington, DC. This was an Anti-Masonic party that ran under various party labels in the northern states.

The convention nominated James L. Curtis of New York for president and James R. Greer of Tennessee for vice-president. Greer declined to run, so Peter D. Wigginton of California was chosen as his replacement.[6]

The 2nd Equal Rights Party National Convention assembled in Des Moines, Iowa. At the convention, mail-in ballots were counted. The delegates cast 310 of their 350 ballots for the following ticket: Belva A. Lockwood for president and Alfred H. Love for vice-president.

Albert Redstone won the endorsement of some leaders of the disintegrating Greenback Party. He told the Montgomery Advertiser that he would carry several states, including Alabama, New York, North Carolina, Arkansas, Pennsylvania, Illinois, Iowa, and Missouri.[8]

File:1888TariffReform.png
Tariff reform was the main issue of the election.

Cleveland set the main issue of the campaign when he proposed a dramatic reduction in tariffs in his annual message to Congress in December 1887. Cleveland contended that the tariff was unnecessarily high and that unnecessary taxation was unjust taxation. The Republicans responded that the high tariff would protect American industry from foreign competition and guarantee high wages, high profits, and high economic growth.[citation needed]

The argument between protectionists and free traders over the size of the tariff was an old one, stretching back to the Tariff of 1816. In practice, the tariff was practically meaningless on industrial products, since the United States was the low-cost producer in most areas (except woolens), and could not be undersold by the less efficient Europeans. Nevertheless, the tariff issue motivated both sides to a remarkable extent.[citation needed]

Besides the obvious economic dimensions, the tariff argument also possessed an ethnic dimension. At the time, the policy of free trade was most strongly promoted by the British Empire, and so any political candidate who ran on free trade instantly was under threat of being labelled pro-British and antagonistic to the Irish-American voting bloc. Cleveland neatly neutralized this threat by pursuing punitive action against Canada (which, although autonomous, was still part of the British Empire) in a fishing rights dispute.[citation needed]

Harrison was well-funded by party activists and mounted an energetic campaign by the standards of the day, giving many speeches from his front porch in Indianapolis that were covered by the newspapers. Cleveland adhered to the tradition of presidential candidates not campaigning, and forbade his cabinet from campaigning as well, leaving his 75-year-old vice-presidential candidate Thurman as the spearhead of his campaign.[citation needed]

William Wade Dudley (1842–1909), an Indianapolis lawyer, was a tireless campaigner and prosecutor of Democratic election frauds. In 1888, Benjamin Harrison made Dudley Treasurer of the Republican National Committee. The campaign was the most intense in decades, with Indiana dead even. Although the National Committee had no business meddling in state politics, Dudley wrote a circular letter to Indiana's county chairmen, telling them to "divide the floaters into Blocks of Five, and put a trusted man with the necessary funds in charge of these five, and make them responsible that none get away and that all vote our ticket." Dudley promised adequate funding. His pre-emptive strike backfired when Democrats obtained the letter and distributed hundreds of thousands of copies nationwide in the last days of the campaign. Given Dudley's unsavory reputation, few people believed his denials. A few thousand "floaters" did exist in Indiana—men who would sell their vote for $2. They always divided 50-50 (or perhaps, $5,000-$5,000) and had no visible impact on the vote. The attack on "blocks of five" with the suggestion that pious General Harrison was trying to buy the election did enliven the Democratic campaign, and it stimulated the nationwide movement to replace ballots printed and distributed by the parties with secret ballots.[9]

A California Republican named George Osgoodby wrote a letter to Sir Lionel Sackville-West, the British ambassador to the United States, under the assumed name of "Charles F. Murchison," describing himself as a former Englishman who was now a California citizen and asked how he should vote in the upcoming presidential election. Sir Lionel wrote back and in the "Murchison letter" indiscreetly suggested that Cleveland was probably the best man from the British point of view.[citation needed]

The Republicans published this letter just two weeks before the election, where it had an effect on Irish-American voters exactly comparable to the "Rum, Romanism, and Rebellion" blunder of the previous election: Cleveland lost New York and Indiana (and as a result, the presidency). Sackville-West was removed as British ambassador.[10]

File:PresidentialCounty1888Colorbrewer.gif
Results by county explicitly indicating the percentage of the winning candidate in each county. Shades of blue are for Cleveland (Democratic), shades of red are for Harrison (Republican), and shades of green are for Streeter (Union Labor).

The election focused on the swing states of New York, New Jersey, Connecticut, and Harrison's home state of Indiana.[11] Harrison and Cleveland split these four states, with Harrison winning by means of notoriously fraudulent balloting in New York and Indiana.[12]

1888 marked the third election in U.S. history in which the winning candidate received fewer popular votes than the runner-up. Grover Cleveland defeated Benjamin Harrison in the popular vote by slightly more than 90,000 votes (0.8%). Harrison, however, won the Electoral College (United States) by a 233-168 margin, largely by virtue of his 1.09% percent win in Cleveland's home state of New York.

Had Cleveland won his home state, he would have won the electoral vote by an electoral count of 204-197 (201 electoral votes were needed for victory in 1888). Instead, Cleveland became the third of only four men to win the popular vote but lose their respective presidential elections (Andrew Jackson in 1824, Samuel J. Tilden in 1876, and Al Gore in 2000).

Upon leaving the White House at the end of her husband's first term, First Lady Frances Cleveland is reported to have told the White House staff to take care of the building since the Clevelands would be returning in four years. She proved correct, becoming the only First Lady to preside at two nonconsecutive administrations.

In 1968 the Michael P. Antoine Company produced the Walt Disney Company musical film The One and Only, Genuine, Original Family Band which centers around the election of 1888 and the annexing and subdividing of the Dakota Territory into states (which was a major issue of the election).