The United States presidential election of 1956 was the 43rd quadrennial presidential election, held on Tuesday, November 6, 1956. The popular incumbent President, Republican Dwight D. Eisenhower, successfully ran for re-election. The election was a re-match of 1952, as Eisenhower's opponent in 1956 was Adlai Stevenson, a former Illinois governor, whom Eisenhower had defeated four years earlier.

Eisenhower was popular, although his health had become a quiet issue[citation needed]. Stevenson remained popular with a core of liberal Democrats, but held no office and had no real base. He (and Eisenhower) largely ignored the subject of civil rights[citation needed]. As the country enjoyed peace - Eisenhower had ended the Korean War - and economic growth, few doubted a successful re-election for the charismatic Eisenhower.

Early in 1956, there was speculation that Eisenhower would not run for a second term because of concerns about his health. In 1955, Eisenhower had suffered a serious heart attack, and in early 1956 he underwent surgery for ileitis. However, he quickly recovered after both incidents, and after being cleared by his doctors, he decided to run for a second term. Given Eisenhower's enormous popularity, he was re-nominated with no opposition at the 1956 Republican National Convention in San Francisco, California.

The only question among Republicans was whether Vice-President Richard Nixon would again be Eisenhower's running mate. There is some evidence that Eisenhower would have preferred a less controversial running mate, such as Governor Christian Herter of Massachusetts, and according to some historians (such as Stephen E. Ambrose), Eisenhower privately offered Nixon another position in his cabinet, such as Secretary of Defense. However, Harold Stassen was the only Republican to publicly oppose Nixon's re-nomination for Vice-President, and Nixon remained highly popular among the Republican rank-and-file voters. Nixon had also reshaped the vice-presidency, using it as a platform to campaign for Republican state and local candidates across the country, and these candidates came to his defense. In the spring of 1956, Eisenhower publicly announced that Nixon would again be his running mate, and Stassen was forced to second Nixon's nomination at the Republican Convention. Unlike 1952, conservative Republicans (who had supported Robert A. Taft against Eisenhower in 1952) did not attempt to shape the platform. At the convention, one delegate voted for a fictitious "Joe Smith" for Vice-President to prevent a unanimous vote. 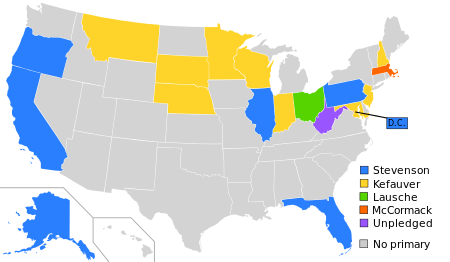 Results of the 1956 Democratic Presidential Primaries.

Adlai Stevenson, the Democratic Party's 1952 nominee, fought a tight primary battle with populist Tennessee Senator Estes Kefauver for the 1956 nomination. Kefauver won the New Hampshire primary unopposed (though Stevenson won 15% on write-ins). After Kefauver upset Stevenson in the Minnesota primary, Stevenson, realizing that he was in trouble, agreed to debate Kefauver in Florida. Stevenson and Kefauver held the first televised presidential debate on May 21, 1956, before the Florida primary. Stevenson carried Florida by a 52-48% margin. By the time of the California primary in June 1956, Kefauver's campaign had run low on money and could not compete for publicity and advertising with the well-funded Stevenson. Stevenson won the California primary by a 63-37% margin, and Kefauver soon withdrew from the race.

At the 1956 Democratic National Convention in Chicago, Illinois, New York Governor W. Averell Harriman, who was backed by former President Harry S. Truman, challenged Stevenson for the nomination. However, Stevenson's delegate lead was much too large for Harriman to overcome, and Stevenson won the nomination on the first ballot.

The highlight of the 1956 Democratic Convention came when Stevenson, to create excitement for the ticket, made the surprise announcement that the convention's delegates would choose his running mate. This set off a desperate scramble among several candidates to win the nomination. Potential vice-presidential candidates had only one hectic day to campaign among the delegates before the voting began. The two leading contenders were Senator Kefauver, who retained the support of his primary delegates, and young Senator John F. Kennedy of Massachusetts, who was relatively unknown at that point. Although Stevenson privately preferred Senator Kennedy to be his running mate, he did not attempt to influence the balloting for Kennedy in any way. Kennedy surprised the experts by surging into the lead on the second ballot; at one point, he was only 15 votes shy of winning. However, a number of states then left their "favorite son" candidates and switched to Kefauver, giving him the victory. Kennedy then gave a gracious concession speech. The defeat was a boost for Kennedy's long-term presidential chances: as a serious contender, he gained favorable national publicity, yet by losing to Kefauver he avoided blame for Stevenson's loss to Eisenhower in November. The vote totals in the vice-presidential balloting are recorded in the following table, which also comes from Bain & Parris.

Stevenson campaigned hard against Eisenhower, with television ads for the first time being the dominant medium for both sides. Because Eisenhower's 1952 election victory was due, in large part, to winning the female vote, there was a plethora of "housewife" focused ads. Some commentators at the time also argued that television's new prominence was a major factor in Eisenhower's decision to run for a second term at age 66, considering his weak health after the heart attack in 1955. Television allowed Eisenhower to reach people across the country without enduring the strain of repeated coast-to-coast travel, making a national campaign more feasible.[2] 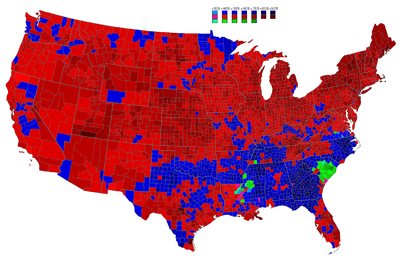 Results by county explicitly indicating the percentage for the winning candidate. Shades of red are for Eisenhower (Republican), shades of blue are for Stevenson (Democratic), and shades of green are for Unpledged Electors/Andrews (Independent/States' Rights).

Stevenson proposed significant increases in government spending for social programs and treaties with the Soviet Union to lower military spending and end nuclear testing on both sides. He also proposed to end the military draft and switch to an "all-volunteer" military. Eisenhower publicly opposed these ideas, even though in private he was working on a proposal to ban atmospheric nuclear testing. Eisenhower had retained the enormous personal and political popularity he had earned during World War II, and he maintained a comfortable lead in the polls throughout the campaign.

Eisenhower was also helped by his handling of two developing foreign-policy crises that occurred in the weeks before the election. In the Soviet-occupied People's Republic of Hungary, many citizens had risen in revolt in the Revolution of 1956 against Soviet domination, but the Soviets responding by invading the country on October 26. Three days later, a combined force of Israeli, British, and French troops invaded Egypt to topple Gamal Abdel Nasser and seize the recently nationalized Suez Canal. The resolution of the latter crisis rapidly moved to the United Nations,[3] and the Hungarian revolt was brutally crushed within a few days by re-deployed Soviet troops. Eisenhower condemned both actions, but was unable to help Hungary; he did, however, forcefully pressure the western forces to withdraw from Egypt.

While these two events led many Americans to rally in support of the president and swelled his expected margin of victory, the campaign was seen differently by some foreign governments.[4] The Eisenhower administration had also supported the Brown v. Board of Education ruling in 1954; this ruling by the U.S. Supreme Court ended legal segregation in public schools. As a result, Eisenhower won the support of nearly 40% of black voters; he was the last Republican presidential candidate to receive such a level of support from black voters.

Eisenhower led all opinion polls by large margins throughout the campaign. On Election Day Eisenhower took over 57% of the popular vote and won 41 of the 48 states. Stevenson won only six Southern states and the border state of Missouri, becoming the first losing candidate since William Jennings Bryan in 1900 to carry Missouri. Eisenhower carried Louisiana, making him the first Republican presidential candidate to carry the state since Rutherford Hayes had done so in 1876 during Reconstruction.

Close states (margin of victory more than 5%, but less than 10%, totaling 46 electoral votes)

(a) Alabama faithless elector W. F. Turner, who was pledged to Adlai Stevenson and Estes Kefauver, instead cast his votes for Walter Burgwyn Jones, who was a circuit court judge in Turner's home town, and Herman Talmadge, governor of the neighboring state of Georgia.

Because of the admission of Alaska and Hawaii as states in 1959, the 1956 presidential election was the last in which there were 531 electoral votes.