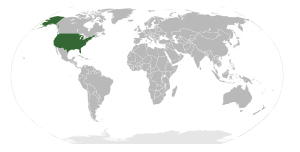 A map of the Earth, showing the fifty U.S. states in green.

Territory of the United States

Constitution of the United States 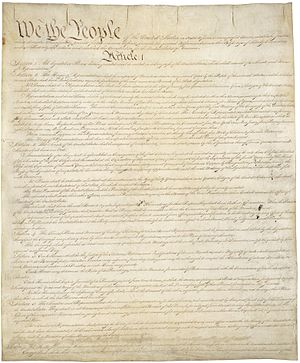 Original copy of the Constitution.

Under Article IV of the U.S. Constitution, territory is subject to and belongs to the United States (but not necessarily within the national boundaries or any individual state). This includes tracts of land or water not included within the limits of any State and not admitted as a State into the Union.

The Constitution of the United States states:

The Congress shall have Power to dispose of and make all needful Rules and Regulations respecting the Territory or other Property belonging to the United States; and nothing in this Constitution shall be so construed as to Prejudice any Claims of the United States, or of any particular State.

Congress of the United States

Congress possesses power to set territorial governments within the boundaries of the United States.[4] The power of Congress over such territory is exclusive and universal. Congressional legislation is subject to no control, unless in the case of ceded territory. The U.S. Congress is granted the exclusive and universal power to set a United States territory's political divisions.

Supreme Court of the United States

All territory under the control of the federal government is considered part of the "United States" for purposes of law.[5] From 1901–1905, the U.S. Supreme Court in a series of opinions known as the Insular Cases held that the Constitution extended ex proprio vigore to the territories. However, the Court in these cases also established the doctrine of territorial incorporation. Under the same, the Constitution only applied fully in incorporated territories such as Alaska and Hawaii, whereas it only applied partially in the new unincorporated territories of Puerto Rico, Guam and the Philippines.[6][7] A Supreme Court ruling from 1945 stated that the term "United States" can have three different meanings, in different contexts:

The term "United States" may be used in any one of several senses. It may be merely the name of a sovereign occupying the position analogous to that of other sovereigns in the family of nations. It may designate the territory over which the sovereignty of the United States extends, or it may be the collective name of the states which are united by and under the Constitution.

United States Department of the Interior

Territories are subdivided into legally administered tracts—e.g., geographic areas that are under the authority of a government.[9] For example, American Samoa is a territory of the government of the United States. The U.S. states created the federal government and the U.S. Constitution and comprise the sovereign United States. The United States, rather than individual states, conducts foreign relations under the U.S. Constitution. The District of Columbia is under the direct authority of Congress,[10] and was established from territory ceded by the states of Maryland and Virginia, with all of the Virginia cession having since been returned to that state.[citation needed]

The contiguous United States, Hawaii, and Alaska are divided into smaller administrative regions. These are called counties in 48 of the 50 states, and they are called boroughs in Alaska and parishes in Louisiana. A county can include a number of cities and towns, or just a portion of either type. These counties have varying degrees of political and legal significance. A township in the United States refers to a small geographic area. The term is used in two ways: a survey township is simply a geographic reference used to define property location for deeds and grants; a civil township is a unit of local government, originally rural in application.

Main articles: Insular area and Territories of the United States

Map of the U.S. Insular areas.

Several islands in the Pacific Ocean and Caribbean Sea are dependent territories of the United States.[21][22]

The Guantanamo Bay Naval Base, Guantanamo Bay, Cuba, is administered by the United States under a perpetual lease, much as the Panama Canal Zone used to be before the signing of the Torrijos-Carter Treaties and only mutual agreement or U.S. abandonment of the area can terminate the lease.

From July 18, 1947, until October 1, 1994, the United States administered the Trust Territory of the Pacific Islands, but the Trust ceased to exist when the last member state of Palau gained its independence to become the Republic of Palau. The Panama canal, and the Canal Zone surrounding it, was territory administered by the United States until 1999, when control was relinquished to Panama.

The United States has made no territorial claim in Antarctica but has reserved the right to do so.

Maritime territory of the United States

The government of the United States of America has claims to the oceans in accord with the United Nations Convention on the Law of the Sea, which delineates a zone of territory adjacent to territorial lands and seas. United States protects this marine environment, though not interfering with other lawful uses of this zone. The United States jurisdiction has been established on vessels, ships, and artificial islands (along with other marine structures).

In 1983 President Ronald Reagan, through Proclamation No. 5030, claimed a 200-mile exclusive economic zone. In December 1988 President Reagan, through Proclamation No. 5928, extended U.S. territorial waters from three nautical miles to twelve nautical miles for national security purposes. However a legal opinion from the Justice Department questioned the President's constitutional authority to extend sovereignty as Congress has the power to make laws concerning the territory belonging to the United States under the U.S. Constitution. In any event, Congress needs to make laws defining if the extended waters, including oil and mineral rights, are under State or Federal control.[23][24]

The primary enforcer of maritime law is the U.S. Coast Guard. Federal and state governments share economic and regulatory jurisdiction over the waters owned by the country. (See tidelands.) 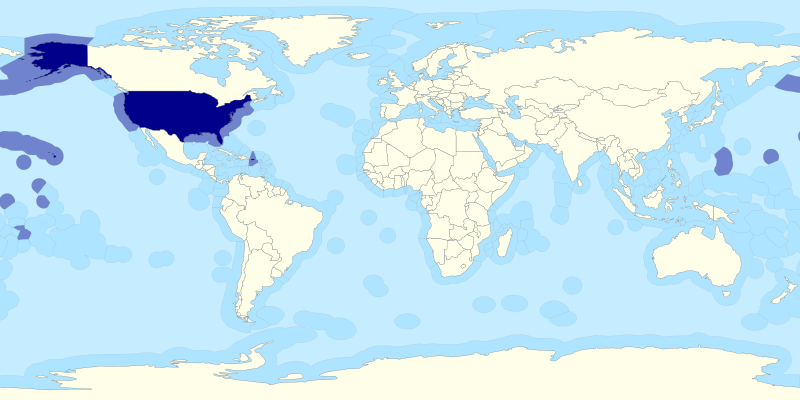 The Exclusive Economic Zones of the United States

Like many nations, the United States of America has acquired territory by force and conquest (Latin, "to seek for"). Under the Hague Conventions of 1899 and 1907, United States territory can include areas occupied by and controlled by the United States Armed Forces. When de facto military control is maintained and exercised, occupation (and thus possession) extends to that territory. Military personnel in control of the territory have a responsibility to provide for the basic needs of individuals under their control (which includes food, clothing, shelter, medical attention, law maintenance, and social order). To prevent systematic abuse of puppet governments by the occupation forces, they must enforce laws that were in place in the territory prior to the occupation.

U.S. sovereignty includes the airspace over its land and territorial waters. No international agreement exists on the vertical limit that separates this from outer space, which is international.

Federal jurisdiction includes federal enclaves like national parks and domestic military bases, even though these are located in the territory of a state. Host states exercise concurrent jurisdiction to some degree.

The United States exercises extraterritoriality on overseas embassies and military bases, including the Guantanamo Bay Naval Base in Cuba. Despite exercise of extraterritorial jurisdiction, these overseas locations remain under the sovereignty of the host countries.

The federal government also exercises property ownership, but not sovereignty over land in various foreign countries. Examples include the John F. Kennedy Memorial built at Runnymede in England,[25] and 13 hectares around Pointe du Hoc in Normandy, France.[26]