The concept of universal suffrage, also known as general suffrage or common suffrage, consists of the right to vote of all except a small number of adult citizens (or subjects).[1] As minors are generally excluded, the concept is frequently described as universal adult suffrage. Many countries make an exception for small numbers of adults that are considered mentally incapable of voting. Other countries also exclude people convicted of serious crimes or people in jail, but this is considered a violation of a basic human right in an increasing number of countries. In some countries, including the United States, it is very difficult and expensive for convicted criminals to regain this right even after having served their jail sentence. In any case, where universal suffrage exists, the right to vote is not restricted by race, sex, belief, wealth, or social status.

In the United States, the term "suffrage" is often associated specifically with Women's Suffrage, as the term became widely known during the American Suffragettes movement, which began in the mid-nineteenth century and ultimately peaked during the first three decades of the twentieth century. This radical and explosive movement eventually culminated in the year 1920, when the United States ruled that women were to be given the same rights to vote and run for office as men by passing the Nineteenth Amendment.

The First French Republic was the second nation that adopted universal male suffrage, doing so in 1792; it was one of the first national systems that abolished all property requirements as a prerequisite for allowing men to register and vote. Greece recognized full male suffrage in 1830 and France and Switzerland have continuously done so since the 1848 Revolution (for resident male citizens). Upon independence in the 19th century, several Latin American countries and Liberia in Africa initially extented suffrage to all adult males, but subsequently restricted it based on property requirements. The German Empire implemented full male suffrage in 1871.[citation needed] The United States adopted full male suffrage with the Fifteenth Amendment to the United States Constitution in 1870,[citation needed] but this was rescinded in the South after 1890 with the reinstitution of property and literacy requirements until the Voting Rights Act of 1965.

In 1893, the self-governing colony New Zealand became the first country in the world (except for the short-lived 18th century Corsican Republic) to grant active universal suffrage by giving women the right to vote. It did not grant universal full suffrage (the right to both vote and be a candidate, or both active and passive suffrage) until 1919.[2] 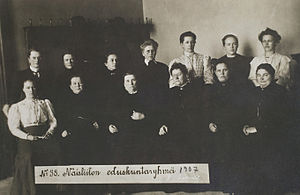 The first female MPs in the world were elected in Finland in 1907.

In 1906, the autonomous Grand Principality of Finland, which became the republic of Finland, was the first country in the world to implement full universal suffrage, as women could stand as candidates, unlike in New Zealand, and ethnic exclusion wasn't implemented, unlike in Australia. It also elected the world's first female members of parliament the following year.[4][5]

In most countries, universal suffrage (the right to vote but not necessarily the right to be a candidate) followed about a generation after universal male suffrage. Notable exceptions in Europe were France, where women could not vote until 1944, Greece (1952), and Switzerland (1971 in federal elections and 1990 in all cantonal elections). It is worth noting that countries that took a long time to adopt women's suffrage had previously often been pioneers in granting universal male suffrage.

In the first modern democracies, governments restricted the vote to those with property and wealth, which almost always meant a minority of the male population. In some jurisdictions, other restrictions existed, such as requiring voters to practice a given religion. In all modern democracies, the number of people who could vote has increased progressively with time. In the 19th century in Europe, Great Britain and North America, there were movements advocating "universal [male] suffrage". The democratic movement of the late 19th century, unifying liberals and social democrats, particularly in northern Europe, used the slogan Equal and Common Suffrage.

The concept of universal suffrage requires the right to vote to be granted to all its residents. All countries, however, do not allow certain categories of citizens to vote. All countries currently have a minimum age, usually coinciding with the age of majority, and several countries impose felony disenfranchisement and disfranchisement based on resident status and citizenship. Saudi Arabia was the last major country that did not allow women to vote, but admitted women both to voting and candidacy in the 2015 municipal elections. 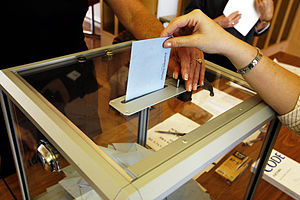 Voting is an important part of the formal democratic process. 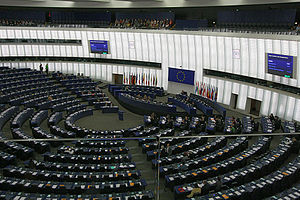 The European Parliament is the only supranational organ elected with universal suffrage (since 1979).

France, under the 1793 Jacobin constitution, was the first major country to enact suffrage for all adult males, though it was never formally enacted in practice (the subsequent election occurring after the fall of the Jacobin government). The Second French Republic did institute adult male suffrage after the revolution of 1848.

Following the French and American revolutions, the first movements in the Western world toward universal suffrage occurred in the early 19th century, and focused on removing property requirements for voting. In 1867, Germany (the North German Confederation) enacted suffrage for all adult males. In the United States following the American Civil War, slaves were freed and granted rights of citizens, including suffrage for adult males (although several states established restrictions largely, though not completely, diminishing these rights). In the late 19th and early 20th centuries, the focus of the universal suffrage movement came to include the extension of the right to vote to women, as happened from the post-Civil War era in several Western states and the 1890s in a number of British colonies.

Several European nations that had enacted universal suffrage had their normal legal process, or their status as an independent nation, interrupted during and after the First World War.

Many societies in the past have denied or abridged political representation on the basis of race or ethnicity, related to discriminatory ideas about citizenship. For example, in apartheid-era South Africa, non-white people could generally not vote in national elections until the first multi-party elections in 1994 (except under the Cape Qualified Franchise, which was replaced by a number of separate MPs in 1936 (Blacks) and 1958 (Coloureds), later by the Tricameral Parliament). Rhodesia enacted a similar statute in its proclaimed independence, which however allowed a smaller number of representatives for the considerably larger Black majority (under its 1961 constitution, the voting classes had been based on socio-economic standards, which marginalized most Black and a few White voters to a separate set of constituencies, under the principle of weighted voting; this replaced in 1969 by an openly racial franchise, with delegated all Blacks to the 'B' voters roll).

Although in the United States African Americans were granted the rights of citizens, including suffrage, by constitutional amendments following the American Civil War, later in the century white Democrats had regained control in all states of the former Confederacy in the American South. From 1890 to 1910 they passed new constitutions, laws or constitutional amendments establishing barriers to voter registration and, later, voting, that essentially disfranchised most African Americans. Though these were, in order not to abridge the Fifteenth Amendment, based on economic and educational standards (i.e. upkeep of poll taxes and submission to literacy tests), and thus excluded a number of poor White voters as well, they were overtly racist in their intent - with grandfather clauses largely excepting those whose forefathers had held the vote under the previously racial franchise and white primaries in states where only the Democratic party could exercise any political weight - and practical consequences. This mounted legal challenges, but African Americans did not fully regain the ability to exercise their rights until after passage in the mid-1960s of the Twenty-fourth amendment, which secured the right to vote in relation to poll taxes, and the Voting Rights Act, which provided federal protection and enforcement of elections. This was a result of their activism in the Civil Rights Movement and a series of legal challenges, most notably Smith v. Allright (which banned white primaries).

Nations have differing degrees of legal recognition of non-resident citizens: non-resident Danes cannot vote after two years;[8] non-resident Italians may vote for representatives at-large in the Italian parliament; British citizens cannot vote for their national parliament unless they have lived in the UK within the last fifteen years.[9] A few nations also restrict those who are part of the military or police forces, e.g. Kuwait.[10]

Many democratic countries, for example the United Kingdom and France, have had colonies with citizens living outside of the mother country and have generally not been entitled to vote for the national legislature. A peculiarly complex case is that of Algeria under the Third French Republic: Algeria was legally an integral part of France, but citizenship was restricted (as in other French colonies proper) by legal status, not by race or ethnicity. Any Muslim Algerian could become a French citizen by choosing to live like one. As this required the person to resign jurisdiction under Islamic law in favour of French civic law, very few did. Among Muslims, such a change was considered apostasy from Islam, which was the dominant religion in Algeria. Colonists in America declared Independence from Great Britain citing "no taxation without representation" as one of their main grievances. However, the newly established country did not extend voting rights in the United States beyond white adult male property owners (about 6% of the population),[11] and did not grant its overseas citizens the right to vote in elections either, until the passage of the Uniformed and Overseas Citizens Absentee Voting Act in 1986.

In the West Bank, Palestinians are not Israeli citizens and therefore cannot vote in Israeli elections. Different areas of the West Bank are under varying levels of Israeli control. Settlers (and their offspring) to Area C retain their citizenship, and can continue to vote.

States have granted and revoked universal suffrage at various times. This list can be organised in three ways:

Note: The table can be sorted alphabetically or chronologically using the

Women's suffrage (with the same property qualifications as for men) was granted in New Jersey in 1776 (the word "inhabitants" was used instead of "men" in the 1776 Constitution) and rescinded in 1807.

South Australia first granted women suffrage and allowed them to stand for parliament in 1894.

The autonomous Grand Principality of Finland , a decade before becoming the republic of Finland, was the first country in the world to implement full universal suffrage, by giving women full political rights, i.e. both the right to vote and to run for office, and was the second in the world and the first in Europe to give women the right to vote.[50][51] The world's first female members of parliament were elected in Finland the following year.

In 1931, the Second Spanish Republic allowed women the right of passive suffrage with three women being elected.

During a discussion on extending women's right to active suffrage, the Radical Socialist Victoria Kent confronted the Radical Clara Campoamor. Kent argued that Spanish women were not yet prepared to vote and, since they were too influenced by the Catholic Church, they would vote for right-wing candidates. Campoamor however pleaded for women's rights regardless of political orientation. Her point finally prevailed and, in the election of 1933, the political right won with the vote of citizens of any sex over 23. Both Campoamor and Kent lost their seats.

Democratic schools practice and support universal suffrage in school, which allows a vote to every member of the school, including students and staff. Such schools hold that this feature is essential for students to be ready to move into society at large.[52][53]

This audio file was created from a revision of the "Universal suffrage" article dated 2010-06-05, and does not reflect subsequent edits to the article. (Audio help)
More spoken articles
Retrieved from "https://infogalactic.com/w/index.php?title=Universal_suffrage&oldid=724687858"
Categories:
Hidden categories: