Gadjah Mada University (Indonesian: Universitas Gadjah Mada; abbreviated as UGM) is a public research university located in Yogyakarta, Daerah Istimewa Yogyakarta, Indonesia. Officially founded on 19 December 1949,[4] three years after its first lecture was given on 13 March 1946, it is the oldest and largest institution of higher education in Indonesia.[5][6][7]

Comprising 18 faculties[8] and 27 research centers,[9] UGM offers 68 undergraduate, 23 diploma, 104 master and specialist, and 43 doctorate study programs, ranging from the Social Sciences to Engineering. The university has enrolled approximately 55,000 students, 1,187 foreign students, and has 2,500 faculty members. UGM maintains a campus of 360 acres (150 ha),[10] with facilities that include a stadium and a fitness center.[11] 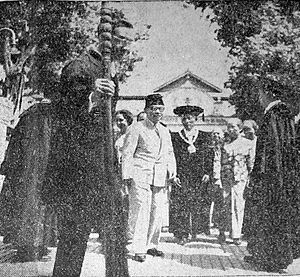 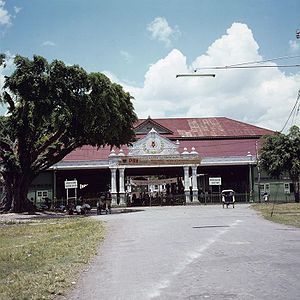 UGM was the first state university in Indonesia, established as Universiteit Negeri Gadjah Mada (UNGM) when Indonesia was three years old and facing threats from the Netherlands, which wanted to regain control of the Republic. At that time, the capital of Indonesia had moved from Jakarta to Jogjakarta.[12]

UGM was established through Government Regulation (PP) No. 23 of 1949, regarding the merger of colleges to form a university. Although these regulations were dated 16 December 1949, the UGM's inauguration took place on 19 December 1949. 19 December was intentionally chosen to alleviate the grief caused by the invasion of the city of Yogyakarta the year before. Additionally, it was meant to show the world that exactly a year after the Netherlands had returned to Indonesia (19 December 1948), the government would be able to establish a nationwide university.[12]

During its initial years the university used the buildings and other facilities belonging to the Kraton of Yogyakarta (Sultan Hamengkubuwono IX's palace). UGM gradually established a campus of its own in Bulaksumur on the northern side of Yogyakarta. The university now occupies an area of three square kilometres.[clarification needed][citation needed]

UGM is implementing an "educopolis area" by creating a conducive learning environment—especially by developing multidisciplinary collaborations and by responding to ecological issues—in order to achieve the vision of the university. Some of the steps taken include construction of new dormitories on campus, development of pedestrian areas, reduction in pollution and vehicle exhaust emissions, restrictions on vehicles entering campus, development of parking pockets,[clarification needed] and planting trees.[10] 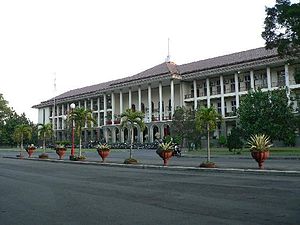 The UGM main building is the Balairung (rectorate building), in Bulaksumur, Yogyakarta, 55281. Nearby is the Graha Sabha Pramana – a large building utilized for graduation ceremonies - with an adjoining square used for sport and recreation.[13] There are also a university library and a sports center consisting of a stadium, tennis court, and basketball field.

In 1988, UGM opened a master's programme in management (MM-UGM), to train students in business practices. The business school is a collaboration with the University of Kentucky and Temple University.

Faculty of Medicine Universitas Gadjah Mada is one of the oldest medical schools in Indonesia, having been established on 5 March 1946. It is ranked number 72 by the Times Higher Education Supplement 2006 for biomedicine.[16]

In 2002, UGM began offering an English-language-based medicine programme for overseas and Indonesian students to study medicine with an international standard curriculum.[18] The International Medicine Programme is over five years, with the first three and a half years being study and a further one and a half years of clinical rotations. The programme is designed around a problem based learning approach, making use of small study groups.

UGM maintains the Integrated Research and Testing Laboratory (LPPT), which is the university’s central laboratory.[19] 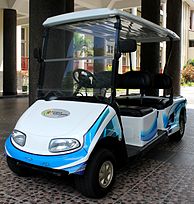 UGM organizes a community service called KKN-PPM. It is a must for undergraduate students to attend KKN, since it is one of the requirements to graduate with a bachelor's degree. KKN-PPM is a research-based community service offered three times each academic year, in the middle of both the odd semester and even semester and between these two semesters. Not only local students joining the KKN, but also international academicians, including lecturers and students, are involved in KKN-PPM UGM. In 2011, 150 international students participated in KKN-PPM, coming from many countries, such as South Korea, Australia, France, the USA and Norway.[citation needed]

Madya Stadium, the softball/baseball field, and the tennis courts are located in the valley of UGM. The stadium can be used for football, athletics, hockey, and other activities. These facilities are available to UGM students, staff and the public.[31] [32]

The Student Center Hall is used for sports activities such as basketball, volleyball, badminton, and martial arts, and for exhibitions and artistic performances.

The open field in the valley of UGM can be used for musical performances or other student activities that require a wide open space.