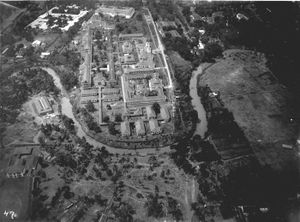 STOVIA medical school complex during the 1920s, the complex consists of buildings now known as the Faculty of Medicine of Universitas Indonesia (top) and Cipto Mangunkusumo Hospital (center).

The roots of UI date back to 1851. At that time, the colonial government of the Dutch East Indies established a school to train medical assistants. Training lasted for two years, and the graduates were certified to provide basic medical treatments. The degree conferred was Javanese Doctor, as the graduates were certified only to open their practice in the Dutch East Indies, especially Java. The program became more comprehensive; by 1864 it was expanded to three years. By 1875, the program of study had reached seven years and the graduates were entitled to the degree of Medical Doctor.

The next step came in 1898, when the Dutch East Indies government established a new school to train medical doctors, named STOVIA (School tot Opleiding van Inlandsche Artsen). A school building was opened in March 1902, in a building that is now the Museum of National Awakening. The prerequisite to enter STOVIA was roughly the equivalent of a junior high school diploma. The schooling took nine years, so it was a mix between high school and university education. Many STOVIA graduates later played important roles in Indonesia's national movement toward independence, as well in developing medical education in Indonesia.

In 1924, the colonial government again decided to open a new tertiary-level educational facility, the RHS (Rechts Hogeschool), to train civilian officers and servants. The RHS would later evolve into the Faculty of Law. In 1927, STOVIA's status was changed to that of a full tertiary-level institution and its name was changed to GHS (Geneeskundige Hogeschool). The GHS occupied the same main building and used the same teaching hospital as the current Faculty of Medicine. Many GHS alumni would later play roles in establishing Universitas Indonesia.

After Indonesia gained independence, the Indonesian Institute for Higher Education (BPTRI) was established in Jakarta consisting of three faculties: Medicine and Pharmacy, Letters, and Law. The institute produced its first 90 graduate students as medical doctors in the same year. When the Dutch colonial army occupied Jakarta in late 1945, the BPTRI moved to Klaten, Surakarta, Yogyakarta, Surabaya and Malang. In 1946, the Dutch colonial government established the Nood Universiteit or Emergency University at Jakarta. In 1947, the name was changed to Universiteit van Indonesië (UVI) or Universitas Indonesia. Following the Indonesian National Revolution, the government established a state university in Jakarta in February 1950. The name was Universiteit Indonesia, comprising the BPTRI units and the former UVI, which was later changed into Universitas Indonesia (UI). 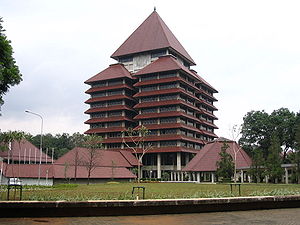 By 1950, UI was a multi-campus university, with faculties in Jakarta (Medicine, Law, and Letters), Bogor (Agronomy and Veterinary Medicine), Bandung (Engineering, Mathematics and Natural Sciences), Surabaya (Medicine and Dentistry), and Makassar (Economics). The Surabaya campus became the University of Airlangga in 1954. In the following year, the Makassar campus became the University of Hasanuddin. In 1959, the Bandung campus became the Bandung Institute of Technology. The School for Physical Education, which was also in Bandung, became part of Padjadjaran University in 1960. In 1964, the Bogor campus became the Bogor Agricultural Institute and the Faculty of Education in Jakarta became the State University of Jakarta. By 1965, UI consisted of three campuses, all in Jakarta: Salemba (Medicine, Dentistry, Economics, Engineering, Science and the Graduate School), Rawamangun (Letters, Law, Social Science and Psychology) and Pegangsaan (Public Health and parts of Medicine).

In 1987, several faculties from the Salemba and Rawamangun campuses moved to a newly built campus in the outskirts of Jakarta. The campus in southern Jakarta is known as the Depok campus (it is in the city of Depok).

In the year 2007-2008, Universitas Indonesia underwent substantial reform. Revenue was significantly increased from 800 billion to 1.6 trillion rupiah. The number of research publications has increased. This is also the case with the university's endowment fund.

The rector of Universitas Indonesia (July 2007), Prof Dr der.soz. Gumilar Rusliwa Somantri, is the youngest leader among university presidents in Indonesia. He has been elected to and serves on the Board of Directors of the Association of Pacific Rim Universities (APRU).

According to the 2008 survey of Globe Asia, UI ranked number first among the top universities in Indonesia.[7] This report has been supported by a leading Indonesian magazine Tempo, which carried out a survey and analysis to rank universities and education in Indonesia.[8] Universitas Indonesia has improved its research collaboration with international partners.

In August 2008, the university won the Indonesia ICT award for the smart campus with best content and application. In terms of accessibility and connectivity, Universitas Indonesia has won an award because 90% of the university's area is covered by IT infrastructure and services with its 305 Mbit/s. connection to the Internet, and its 155 Mbit/s. connection to the Indonesia Higher Education Research Network (Inherent).[9]

The earliest form of the logo of Universitas Indonesia was created in 1952 by Sumaxtono (born as Sumartono), a student from the 1951 Art Department class, Faculty of Engineering, at the time known as the Fakulteit Teknik Universiteit Indonesia, in Bandung.

The logo of Universitas Indonesia carries the following interpretation:

The logo design and the meaning it carried were presented to Srihadi (a student from the 1952 class from the same department) in 1952. Prof. KRHT H. Srihadi Soedarsono Adhikoesoemo, M.A. who created the logo of Bandung Institute of Technology, was not sure who authenticated this logo or when. He was sure, however, that it was printed on the cover of the book Universiteit Indonesia, Fakulteit Teknik, Bandung: Rentjana Untuk Tahun Peladjaran 1952-1953 (Universitas Indonesia, Faculty of Engineering, Bandung: Course Plans for Academic Years 1952-1953), published by AID, Bandung, 120 pages, using the original design by Sumaxtono (without the pentagonal border).

The Salemba campus, located in Central Jakarta, is dedicated mostly to the faculties of Medicine and Dentistry. It adjoins the Cipto Mangunkusumo National Hospital (RSCM) as well as the University Dental Hospital. It houses parts of the postgraduate program, the Faculty of Law (Master of Law Science and Law Science Doctoral Program), Faculty of Economics (Extension and Master of Management programs) and the Faculty of Engineering (laboratories). 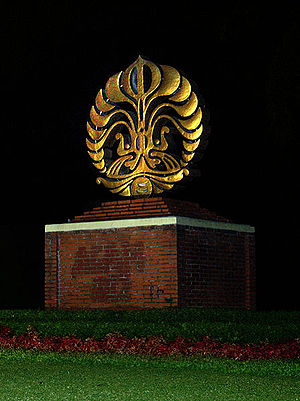 The Depok campus, in Depok, just south of Jakarta, was built during the mid-1980s to accommodate the modernization of the university. It is now the main campus. Most of the faculties (Mathematics and Natural Sciences, Humanities, Pharmacy, Engineering, Psychology, Letters, Economics, Social Politics, Law, Computing, Nursing and Public Health) have been relocated here.

The Depok campus is alongside the Jakarta-Bogor commuter railway, offering students easy access to transport by rail. Students also benefit from the frequent commuter bus services connecting many parts of Jakarta to Depok.

It was planned to relocate the undergraduate training of the medical and dental faculties to Depok in 2010.

The main library of the university is on the campus, along with other facilities such as the Student Services Center, Student Activities Center, gymnasium, stadium, hockey field, hotel (Wisma Makara), travel agent and the dormitory.

Universitas Indonesia maintains 75% of its area for reforestation. Over 20 kilometers of bicycle path have been created and shuttle buses are provided for the students and faculty. The bicycles and buses are to decrease the number of vehicles in the campus.

UI established the GreenMetric Ranking of World Universities[10] in April 2010 to provide detailed profiles of participating universities who wish to make the necessary steps to promote sustainable operations. It is hoped that the rankings, when published, will promote a greater environmental awareness for all institutions of higher learning of the value of putting in places and systems that will have a positive impact on global warming and climate change, particularly those that help reduce carbon emissions through efficient energy use, and alternative forms of transport, greening the campus and recycling. UI's GreenMetric World University Ranking[10] to show the extent to which a university is ‘green’ and become the role model of a sustainable society.

The new library "crystal of knowledge" at Depok used a sustainable concept. Not only in green area and transportation, Universitas Indonesia has relocated nine massive African baobab trees aging over 100 years (one said to be 240 years old) to the Depok campus to prove the university commitment in going green.[11] 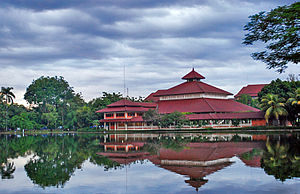 This mosque is on the Depok campus, surrounded by a natural environment and the UI lake. Its construction began on January 28, 1987, and it was used for the first time on September 4, 1987, for Friday prayer. 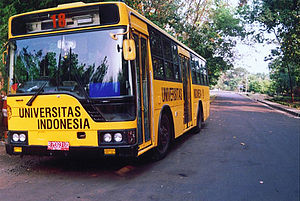 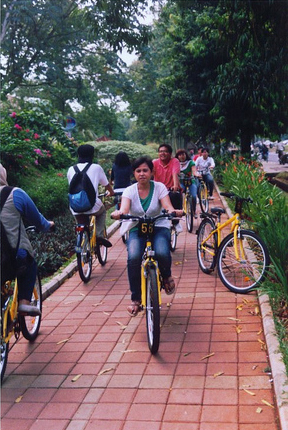 Construction of this mosque, located inside the Salemba campus, was started in 1966 based on a UI rector’s decree. ARH mosque’s vision is to become the center of Islam on the campus, to produce modern Muslims who have both faith and scientific thought, capable of practicing religion and solving religious problems.

The Wisma Makara ("Makara Lodge") is located on Universitas Indonesia’s Depok campus and considered to be amongst the finest accommodation in Depok. The lodge is well suited for public activities such as seminars, trainings, and workshops. Surrounded by natural forest and blue lakes, the atmosphere is tranquil.

Salemba Student Hall is one of the facilities under the management of the Students Affairs and Alumni Relationship Deputy. The building is often used for events such as seminars, meetings, etc. With a capacity of 300 people, it can be used by UI students and personnel, as well as rented for public use. 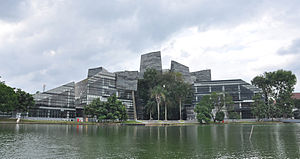 The library at the Depok campus was launched on May 13, 2011.[12] Built on a 33,000 meter square area, this library is considered as the largest library in Southeast Asia. Designed according to a sustainable building concept, the library powers itself with solar energy. It is smoke-free, green, and economical in terms of electricity, water and paper usage. Universitas Indonesia Library has the capacity to accommodate about 20,000 visitors per day and have collection of 1,500,000 books.[13]

Campus buses are available for student transportation at the Depok campus. Locals call them "yellow buses," as the buses are mostly that color. In 2005, Universitas Indonesia had a total of 20 campus buses. They serve regular routes in the campus area from Monday to Friday from 7:00 AM to 9:00 PM and Saturday from 7:00 AM to 2:00 PM.

Since 2007, Universitas Indonesia has offered a bike rental facility for its students. They need to show their UI student card to the rental officer. The bike must be used on bike lanes and it must be returned to where it was rented or another bike station. Campus bikes can be rented until 5:00 PM.

According to the latest survey of Globe Asia (2008), UI ranked first among the top universities in Indonesia [16] This report has been supported by a leading Indonesian magazine Tempo, which carried out a survey and analysis to rank universities and education in Indonesia.

According to the university's website, there are numerous research organizations in UI:[20]

In cooperation with the National Nuclear Energy Agency (Batan) and International Atomic Energy Agency (IAEA), Universitas Indonesia will have a medical physics center at Depok, West Java campus, which will be operated in 2012 as cancer treatment center.[21]