University Campus Suffolk (UCS) is an educational institution located in the English county of Suffolk. UCS is a collaboration between the University of Essex and the University of East Anglia which sponsor its formation and validate its degrees.[2][3] UCS accepted its first students in September 2007. Until then Suffolk was one of only four counties in England which did not have a University campus.[2]

UCS operates at six sites with its central hub in Ipswich. Other sites are centred on pre-existing Higher Education centres in Ipswich, Lowestoft, Bury St. Edmunds, and Great Yarmouth in Norfolk.[4] UCS operates two academic faculties and in 2014/15 had 5,060 students. Some 30% of the student body are classed as mature students and 68% of UCS students are female.[5]

UCS was officially launched on 1 August 2007[2][7] and welcomed its first students in September of the same year.[8] 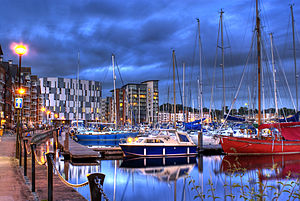 Waterfront location of the Ipswich campus

Based around the Ipswich waterfront redevelopment, UCS Ipswich is the main hub of the network.[2] It was developed from the former Higher Education section of Suffolk College. The Waterfront building, designed by RMJM Architects,[10] is the centre of the hub, opening in September 2008 and costing £35 million.[11][12] It has three lecture theatres, and 34 smaller teaching rooms.[9] The six-storey James Hehir Building was officially opened in March 2011 at a cost of £21 million[13] It is named after the former chief executive of Ipswich Borough Council and includes Cult Cafe. Part of the old Suffolk College site, now known as "Campus North", was redeveloped at a cost of £2.5 million. This houses the small UCS Ipswich library facility or "Learning Resource Centre".[9] Onsite student accommodation is provided in the 600-place Athena Hall, located adjacent to the James Hehir building.[3]

A range of undergraduate and postgraduate courses are offered at UCS Ipswich, including Art and Design, Business and Management, Computing, Education, Film and Media Studies, Health, Nursing and Midwifery, Humanities, Social Sciences and Initial Teacher Training.[2]

Suffolk New College is located next to the UCS Ipswich campus and was developed from the Further Education centre of Suffolk College.[2] It is a centre for civil engineering degrees and initial teacher training.[2]

The Bury St Edmunds Centre is located at the site of West Suffolk College. A range of foundation degrees in subjects including Art, Engineering and Logistics and Transport and Management are taught at the site as well as degrees in Business Management, Education, English and History, CIOB accredited Construction Management and initial teacher training.[2] Over 700 students follow degree and foundation degree courses at the site.[14] The site, which was remodelled in 2011,[14] has an industry-standard recording studio.[9]

UCS Great Yarmouth is located at the Southtown site of Great Yarmouth College in neighbouring Norfolk.[2] Subjects such as Computing, Counselling, Engineering, Fashion, Music, and Photography are available at the centre, which has a modern recording studio.[2][9]

UCS is the lead partner on the LEAP (Learning and Enterprise Access Points) project. The LEAPs are education and training points located in market towns across Suffolk. The aim of the LEAPs is to provide access to a range of education opportunities from basic skills to Higher Education. UCS developed LEAPs around Suffolk by working with the local government and the East of England Development Agency.[citation needed]

The Ipswich Campus has a 600 room hall of residence.[3]

University Campus Suffolk operates as a "Centre for Applied Sustainability". An example of UCSs work with sustainability is the Phase 1 campus development which was assessed as BREEAM Excellent. This signifies that the development is setting the "best practice in sustainable development".[15]

UCS is also actively engaged in the New Anglia Local Enterprise Partnership Green Economy Pathfinder [16] and is launching an MSc in Sustainable business in September 2013.[17]

UCS Union was formed on 1 August 2007, the same day UCS was officially launched. It provides support for its students and looks after their well-being during their studies.[3]

The union is the representative of the student body at the management level of the university and as such its positions are manned by paid and unpaid students who are based at the Union office in the heart of the campus' East building. The Union also looks after the university social calendar, with multiple events run during the academic weeks and special Freshers weeks at the beginning of each academic year.

The President and Vice-President of the Union are, subject to a sufficient number of votes, elected every April, and take office for 12 months from July - July overseeing the totality of one academic year. The candidates come from the student body and must compete in the election campaigns in March/April. There is a current two-year maximum term for the positions. The current President is Jordan Bambridge and the Vice-President is Megan King, both newly elected for 2015.