Laval University (French: Université Laval) is the oldest centre of education in Canada (2nd oldest in North America), and was the first institution in North America to offer higher education in French. Its main campus is located on the outskirts of the historic city in Quebec City, the capital of the province of Quebec. The university is ranked among the top ten Canadian universities in terms of research funding.[1] 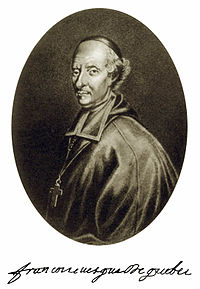 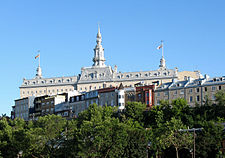 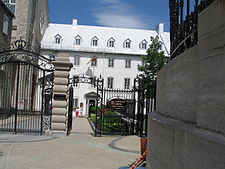 Marie-Victorin laboratory at Université Laval in 1925

The origins of the university are the Séminaire de Québec founded in 1663 by François de Montmorency-Laval, a member of the House of Laval and the first Bishop of New France.[2]

The Séminaire de Québec was granted a Royal Charter on December 8, 1852, by Queen Victoria, at the insistence of Lord Elgin, then governor-general, creating Université Laval with 'the rights and privileges of a university'.[3] The charter was signed in 1852. Pope Benedict XV approved the scheme, and authorized the erection of chairs of theology and the conferring of degrees.[4]

In 1878, the university opened a second campus in Montreal, which later became the Université de Montréal on May 8, 1919, by a writ of Pope Benedict XV. In 1971, a second charter vesting supreme authority in the Université Laval council was proclaimed.[3]

Laval, a waltz by French-Canadian ragtime composer Wilfrid Beaudry, was dedicated to the students at Laval University and the University of Montreal. The music for piano was published in Québec by J. Beaudry, circa 1906.[5]

While the main campus moved out from the Séminaire de Québec since then, the school of architecture returned to this heritage building (now affectionately referred to as Le Vieux Séminaire) in 1989.

The governance structure at Laval incorporates the powers of board and senate. The governance was modelled on the provincial University of Toronto Act of 1906 which established a bicameral system of university government consisting of a senate (faculty), responsible for academic policy, and a board of governors (citizens) exercising exclusive control over financial policy and having formal authority in all other matters. The president, appointed by the board, was to provide a link between the 2 bodies and to perform institutional leadership.[3] In 1911, the Medical Faculty of Université Laval set up courses on public hygiene.

In the early part of the 20th century, professional education expanded beyond the traditional fields of theology, law and medicine. Graduate training based on the German-inspired American model of specialized course work and the completion of a research thesis was introduced.[3]

The policy of university education initiated in the 1960s responded to population pressure and the belief that higher education was a key to social justice and economic productivity for individuals and for society.[6]

The establishment of Laval University by Royal Charter in 1852 was designated a National Historic Event in 1972 and plaqued in 1975.[7]

Université Laval's main campus covers 1.2 km2 and has over 30 buildings, all linked by 10 km of underground walkways, which are frequently used, particularly in the winter, when temperatures drop below the freezing point. Of the campus lands, 56 per cent are wooded areas, grasslands, and sports fields. The campus is home to the Roger-Van den Hende botanical garden and a plethora of different flora and fauna, including some 67 species of deciduous and coniferous trees and 60 different species of birds.

As of 2002, Université Laval offers over 350 programmes to more than 38,000 students. The university also attracts more than 2,500 foreign students annually, and has close to 1,000 students drawn from Canadian provinces outside of Quebec. Many students also come to the university for the Français pour non-francophones programme that offers instruction in French as a second language to students from Canada and around the world. It is also the only university in Quebec which trains forestry engineers. From the mid-80s, Université Laval also offers distance learning. As of now over 30 programmes and over 400 courses are offered by distance learning, of which 80% are accessible from the internet. 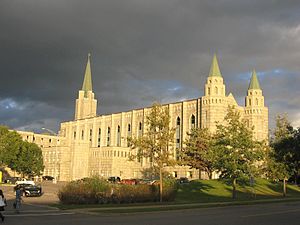 ** The Faculty is part of the AUFSC and has accredited baccalaureate of science programs with specializations in forestry & environmental management; forestry operations (co-op) and forestry engineering.

The Coopérative de l'Université Laval is a cooperative engaged in the sale of products to customers throughout the university, such as books, lecture notes and computers.

Numerous public figures, including Prime Ministers of Canada, Premiers of Quebec, Supreme Court Justices, federal Cabinet Ministers, Senators, and Lieutenant-Governors as well as national and international athletes. Some of the more prominent today are: