The University of Belgrade (Serbian: Универзитет у Београду / Univerzitet u Beogradu) is the oldest and largest university in Serbia.

Founded in 1808 as the Belgrade Higher School in revolutionary Serbia, by 1838 it merged with the Kragujevac-based departments into a single university. The University has nearly 90,000 students (including around 1,700 postgraduates) and over 4,200 members of teaching staff.[3] Since its founding, the University has educated more than 330,000 bachelors, around 21,300 magisters, 29,000 specialists and 12,600 doctors.[4] The University comprises 31 faculties, 11 research institutes, the university library, and 7 university centres. The faculties are organized into 4 groups: social sciences and humanities; medical sciences; natural sciences and mathematics; and technological sciences.

University of Belgrade in 1890

The University of Belgrade was established in 1808 as the Belgrade Higher School (Serbian: Велика школа, a Grande École) by Dositej Obradović, Serbian key figure in the Age of Enlightenment. It was the highest ranking educational institution in Serbia between 1808 and 1905, as the first Higher School (1808–1813), the Belgrade Lyceum (1838–1863), and the second Higher School (1863–1905). It was initially located at the Countess Ljubica's Residence building and then moved to another significant site in Belgrade, the Captain Miša’s Mansion, today's seat of the university.[1]

Dositej Obradović, founder of the university

The second Higher School (also known as the Great School or Great Academy of Belgrade) was established as the successor of the Lyceum and was a combination of a classical gymnasium and a college, and as such developed into the University of Belgrade. Under the law, it was defined as a “scientific institute for higher and professional education”. The Minister of Education had control over this institution and it was managed by the Rector (elected by the monarch) and Academic Council.

From 1841 to 1863, before enrolling the legal department, it was compulsory to graduate at the department for philosophy, where the studies lasted two years. The lectures were held by well-known professors who had earned their diplomas in Austria, Germany and France (Jovan Sterija Popović, Josif Pančić, Đura Daničić, and others).

During the 1850s, the Philosophy (General) Department developed into a particular college. The University of Belgrade's Faculty of Philosophy is today's continuation of this department.

The first academic lecture on electrical engineering in Serbia was held in 1894. Professor Stevan Marković was the first lecturer and founder of the Engineering Department at the Higher School. Only four years later, Professor Marković also established the first Serbian electrical engineering laboratory. Since then, this academic discipline has been studied at the Higher School and the University of Belgrade. The first diplomas in this field were given in 1922. 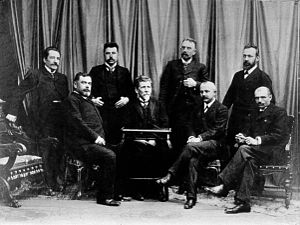 First professors of the University of Belgrade (1905).

In the 1960s and 70s, the University developed into a remarkable regional and international educational institution. Many students from other countries were trained there. In the socialist Yugoslavia, the University was expanded, but it was also exposed to state and ideological influence. It has also been the driving force for the establishment of almost all other universities in today's Serbia, Montenegro, Republic of Macedonia and several universities in Bosnia and Herzegovina.[6]

In 1968, its students organized the first mass protest in post-World War II Yugoslavia.

In the early 1990s the quality of university programs deteriorated as a consequence of the political instability in the country and the subsequent wars of Yugoslavia. There was a lack of financial resources and the quality dropped significantly. During the Milošević government in Serbia, the University had to face external political pressure and the lack of academic and administrative autonomy.[7]

In the mid-1990s, the University of Belgrade became an internationally recognized center of the political opposition in Serbia. Massive anti-government protests were staged by the Belgrade students and professors. The University's student organizations (especially "Otpor!") significantly contributed to overthrowing the government.[8]

Since 2000, the University of Belgrade has taken important steps and has revitalized and improved the facilities and its teaching quality. There have been many reforms in higher education of the country. The University has made great efforts since then to improve the internal structure and has become a signatory of the Bologna declaration. Being one of Europe’s largest universities with an enrollment of nearly 90,000 students, the University broadly cooperates with international academic institutions and is involved in countless bilateral and multilateral academic projects. 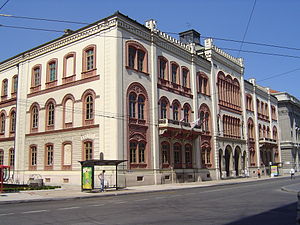 Having developed with the city in the 19th century, a number of the University buildings are an important part of Belgrade’s architecture and cultural heritage. Former sites include today's Museum of Vuk and Dositej and Princess Ljubica's Residence buildings, both of them being recognized[by whom?] as Belgrade's topmost historic buildings.[9] The historical Subotica Law School (1920-1941) was also a part of the University of Belgrade. Some of the Post-World War II facilities were built in the brutalist style. The University has sites throughout the city, with the two major campuses, one next to the Prince Michael Street at Studentski Trg and the other on King Alexandar Boulevard. It has eleven dormitories scattered throughout the city’s urban neighborhoods for 11.340 students, including one dormitory complex in New Belgrade. Many of the schools have separate buildings at various locations in Belgrade. The University also owns several endowment buildings in the downtown district, most of them being built in the 19th and early 20th century.

The Belgrade University Library, a Carnegie library, with over 1.5 million items

The University of Belgrade is governed by the 44-member University Senate elected for a three-year term. The senate is composed of the rector, 4 vice-rectors, 31 deans, 4 presidents of the Faculty Group Councils and 4 directors of scientific institutes. 8 student-representatives with a one-year term elected by the University's Student Parliament participate in the work of the Senate. The rector provides governance and represents the University externally.[10] 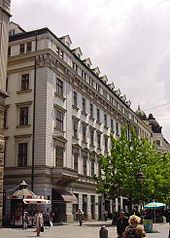 Faculty of Technology and Metallurgy

The University is divided into 31 faculties, including: 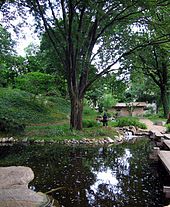 Japanese garden in the University of Belgrade's Botanical Garden

The Belgrade Law School, established in 1808, is a regional leader[citation needed] in legal education and one of the largest law schools in the Balkans. Its law education prepares students for working in law practice, business, public service and teaching. The Residence of Countess Ljubica as well as Captain Miša's Mansion once used to be home to this educational institution when it was within the Belgrade Higher School. Since its founding, it has educated almost 50,000 law graduates, around 1,200 magistri iuris and 830 doctores iuris, as well as hundreds of specialists in various areas. Many Faculty of Law alumni have become recognized experts and scholars in all branches of law, law professors and high ranking government officials.

The Law School's historic building, constructed by Serbian architect Petar Bajalović in 1941, comprises about 12,000 square metres (130,000 sq ft) of space. All the law schools established subsequently in Serbia (Subotica, Novi Sad, Pristina, Niš, Kragujevac), Montenegro (Podgorica), and in other parts of the former Yugoslavia (Sarajevo, Skopje) were formed from the University of Belgrade Faculty of Law as a core.[12]

Initially established in 1937, the Faculty of Economics was the first centre of higher education dedicated to the study of economics in the Kingdom of Yugoslavia. Its curriculum includes courses in economic analysis and policy; marketing; accounting, auditing and financial management; trade and commerce; finance, banking and insurance; tourism and hotel industry; statistics and informatics; management and international economics and foreign trade.[13]

The Faculty of Philosophy is one of the oldest institutions of higher education in Serbia, founded in the early 19th century. It employs a staff of 255 teachers and has approximately 6,000 undergraduate and graduate students within nine departments.[14]

The Faculty of Philology trains and educates its students in the academic study or practice in linguistics and philology. The study of philology was established in Belgrade within the Belgrade Higher School’s Department of Philosophy in 1808. Today, the school offers courses in philology, linguistics and literature in dozens of languages. The school is divided into departments, which possess their own libraries, it operates several research centers and publishes a number of periodical publications.[15] 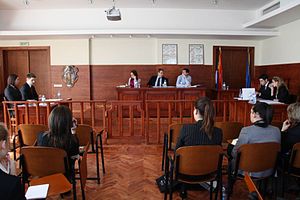 The Belgrade Medical School was established in 1920 and more than 30,000 students graduated from this institution, including circa 850 international students. The School of Medicine is composed of 40 departments with over 200 professorships. The school offers an extensive number of academic courses, including specialization practice within a network of hospitals, institutes and medical clinics.[17] 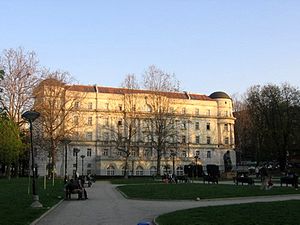 King Alexandar I Dormitory, established in 1927

The University of Belgrade offers housing options within 11 student dormitories and it has the largest student housing system in Serbia, accommodating up to 11,340 people at various locations throughout the city.[20]

The university’s "Student City" in New Belgrade is a dormitory complex organized into 4 blocks, with a total capacity of 4,500 people. It has a theater building, movie theater, facilities for athletics, two libraries, reading rooms and open stage for summer concerts.[21]

The other dormitories are smaller by capacity and scattered throughout the city’s urban neighbourhoods. The King Alexandar I Dormitory (also known as "Lola") at the King Alexandar Boulevard campus is the oldest dormitory in the Balkans, founded in 1927 by King Alexander I of Yugoslavia. It has 190 rooms and provides accommodation for the university’s successful students, based on their grade point average.[22] Some of the dormitories got their names after political leaders. As an example, the Patrice Lumumba Hall of Residence at Belgrade University built in 1961 today continues to carry the name of Lumumba, the first legally elected Prime Minister of the Republic of the Congo after he helped win its independence from Belgium.[23]