From Infogalactic: the planetary knowledge core
(Redirected from University of Breslau)
Jump to: navigation, search 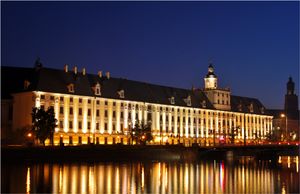 University of Wrocław at night

The University of Wrocław (UWr) (Polish: Uniwersytet Wrocławski; German: Universität Breslau; Latin: Universitas Wratislaviensis) is a public research university located in Wrocław, Poland. Founded in 1702, it is one of the oldest collegiate-level institutions of higher education in Central Europe with around 30,000 students (2012). Throughout its history, it remained a great learning center of a German-speaking countries until territorial changes of Germany after World War II. Following the territorial changes of Poland after World War II academics primarily from Jan Kazimierz University of Lwów restored the university building heavily damaged and split as a result of the Siege of Breslau. The first lectures were conducted in the halls with broken windows.[2]

The University is currently the largest in Lower Silesia with over 100,000 graduates since 1945 including some 1,900 researchers among whom many received the highest awards for their contribution to the development of scientific scholarship.[2] 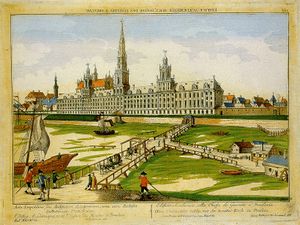 Proposed design of Loepoldina (never fully completed), 1760
Not to be confused with Akademie Leopoldina.

The oldest mention of the university in Wrocław comes from the foundation deed signed on July 20, 1505, by King Vladislaus II of Bohemia and Hungary (also known as Władysław Jagiellończyk) for the Generale litterarum Gymnasium in Wrocław. However, the new academic institution requested by the town council wasn't built because the King's deed was rejected by Pope Julius II for political reasons.[2] Also, the numerous wars and opposition from the Cracow Academy might have played a role. The first successful founding deed known as the Aurea bulla fundationis Universitatis Wratislaviensis was signed two centuries later, on October 1, 1702, by the Holy Roman Emperor Leopold I of the House of Austria, King of Hungary and Bohemia.[2]

The predecessor facilities, which existed since 1638, were converted into Jesuit school, and finally, upon instigation of the Jesuits and with the support of the Silesian Oberamtsrat (Second Secretary) Johannes Adrian von Plencken, donated as a university in 1702 by Emperor Leopold I as a School of Philosophy and Catholic Theology with the designated name Leopoldina. On 15 November 1702, the university opened. Johannes Adrian von Plencken also became chancellor of the University. As a Catholic institute in Protestant Breslau, the new university was an important instrument of the Counter-Reformation in Silesia. After Silesia passed to Prussia, the university lost its ideological character but remained a religious institution for the education of Catholic clergy in Prussia.[citation needed] 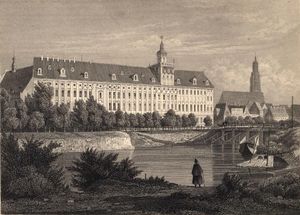 The University of Breslau, 19th century 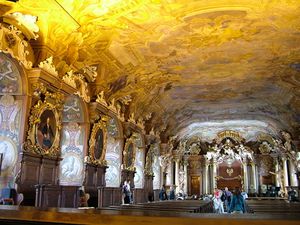 After the defeat of Prussia by Napoleon and the subsequent reorganisation of the Prussian state, the academy was merged on August 3, 1811, with the Protestant Viadrina University, previously located in Frankfurt (Oder) and re-established in Breslau as the Schlesische Friedrich-Wilhelms-Universität zu Breslau. At first, the conjoint academy had five faculties: philosophy, medicine, law, Protestant theology, and Catholic theology.[citation needed]

Connected with the university were three theological seminars, a philological seminar, a seminar for German Philology, another seminar for Romanic and English philology, an historical seminar, a mathematical-physical one, a legal state seminar, and a scientific seminar. From 1842, the University also had a chair of Slavic Studies. The University had twelve different scientific institutes, six clinical centers, and three collections. An agricultural institute with ten teachers and forty-four students, comprising a chemical veterinary institute, a veterinary institute, and a technological institute, was added to the university in 1881. In 1884, the university had 1,481 students in attendance, with a faculty numbering 131.[citation needed]

The library in 1885 consisted of approximately 400,000 works, including about 2,400 incunabula, approximately 250 Aldines, and 2840 manuscripts. These volumes came from the libraries of the former universities of Frankfurt and Breslau and from disestablished monasteries, and also included the oriental collections of the Bibliotheca Habichtiana and the academic Leseinstitut.[citation needed]

In addition, the university owned an observatory; a five-hectare botanical garden; a botanical museum and a zoological garden founded in 1862 by a joint stock company; a natural history museum; zoological, chemical, and physical collections; the chemical laboratory; the physiological plant; a mineralogical institute; an anatomical institute; clinical laboratories; a gallery (mostly from churches, monasteries, etc.) full of old German works; the museum of Silesian antiquities; and the state archives of Silesia.[citation needed]

In the late 19th century, numerous internationally renowned and historically notable scholars lectured at the University of Breslau, Peter Gustav Lejeune Dirichlet, Ferdinand Cohn, and Gustav Kirchhoff among them. According to Polish professor of history Henryk Barycz in the academic year of 1813/1814 Polish youth constituted the majority of students at the University.[3] All students, including German, Polish and Jewish, established their own student fraternities. Polish student organizations included Concordia, Polonia, and a branch of the Sokol association. Many of the students came from areas of partitioned Poland. The Jewish students unions were the Viadrina (founded 1886) and the Student Union (1899). Teutonia, a German Burschenschaft founded in 1817, was actually one of the oldest student fraternities in Germany, founded only two years after the Urburschenschaft. The Polish fraternities were all eventually disbanded by the German professor Felix Dahn,[4] and in 1913 Prussian authorities established a numerus clausus law that limited the number of Jews from non-German Eastern Europe (so called Ostjuden) that could study in Germany to at most 900. The University of Breslau was allowed to take 100.[5]

As Germany turned to Nazism, the university became influenced by Nazi ideology. Polish students were beaten by NSDAP members just for speaking Polish.[6] In 1939, all Polish students were expelled and an official university declaration stated, "We are deeply convinced that [another] Polish foot will never cross the threshold of this German university".[7] In that same year, German scholars from the university worked on a scholarly thesis of historical justification for a "plan of mass deportation in Eastern territories"; among the people involved was Walter Kuhn, a specialist of Ostforschung. Other projects during World War II involved creating evidence to justify German annexation of Polish territories, and presenting Kraków and Lublin as German cities.[8]

In January 2015, the university restored 262 PhD degrees stripped during the Nazi period from Jews and other scholars seen as hostile to the Nazis.[9]

The University of Wrocław 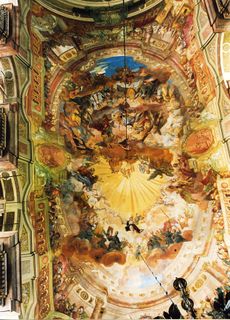 After the Siege of Breslau, the Soviet Red Army took the city in May 1945. The German population fled or was expelled. Wrocław became part of the Republic of Poland. Following postwar border shifts, the Polish Jan Kazimierz University of Lwów, complete with library and Ossolineum was moved from Kresy to Wrocław with thousands of staff, employees and their belongings, because the city of Lwów fell within the Soviet Ukrainian SSR.[10] Many of the buildings were partially destroyed during the defence of the city. Parts of the collection of the university library were burned by soldiers of the Red Army on 10 May 1945, four days after the German garrison surrendered the city.

The University of Wrocław was refounded as a Polish state university by the decree of the State National Council issued on August 24, 1945. The first lecture was given on November 15, 1945, by Ludwik Hirszfeld. Between 1952 and 1989 the university was named Bolesław Bierut University of Wrocław (Polish: Uniwersytet Wrocławski im. Bolesława Bieruta) after Bolesław Bierut, President of the Republic of Poland (1947–52).

In 2002, the university celebrated the 300th anniversary of its founding.

In 2015, the university restores degrees stripped by the Nazis.[12]

Study at University of Wroclaw

There are 10 faculties that provide 44 areas of study, in which the language medium is mostly in Polish, with only some in English. The University of Wrocław provides Bachelor, Master, and Doctoral level programmes. All of the degree certificates awarded by UWr are recognised globally. 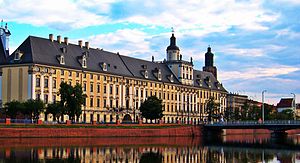 Nobel Prize winners from the former German University when it was known as the Schlesische Friedrich-Wilhelms-Universität zu Breslau:

Rectors (presidents) of the University since 1945: