The University of Cologne (German: Universität zu Köln) is the sixth oldest university in Central Europe[2] and, with more than 48,000 students, one of the largest universities in Germany. It is furthermore the German founding member of the Global Alliance in Management Education (CEMS). Since 2012 the university was awarded in the German Universities Excellence Initiative for its overall concept. As of 2015, the University of Cologne ranks 156th globally according to Times Higher Education,[3] 305th according to QS World University Rankings[4] and between 151st-200th according to the Academic Ranking of World Universities.[5]

The University of Cologne was established in 1388 as the fourth university in the Holy Roman Empire, after the Charles University of Prague (1348), the University of Vienna (1365) and the Ruprecht Karl University of Heidelberg (1386). The charter was signed by Pope Urban VI. The university began teaching on January 6, 1389. In 1798, the university was abolished by the French, who had invaded Cologne in 1794, because under the new French constitution, universities were abolished all over France.The last rector Ferdinand Franz Wallraf was able to preserve the university’s Great Seal, now once more in use.

In 1919, the Prussian government endorsed a decision by the Cologne City Council to re-establish the university. On May 19, 1919, the Cologne Mayor Konrad Adenauer signed the charter of the modern university.

At that point, the new university was located in Neustadt-Süd, but relocated to its current campus in Lindenthal on 2 November 1934. The old premises are now being used for the Cologne University of Applied Sciences.

The University is a leader in the area of economics and is regularly placed in top positions for law and commerce, both for national and international rankings. 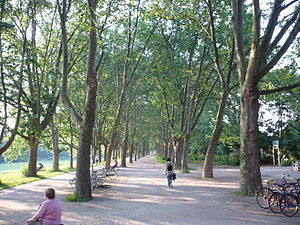 University campus between main building and mensa (the university canteen)

The University of Cologne is a statutory corporation (Körperschaft des öffentlichen Rechts), operated by the Federal State of North Rhine-Westphalia.

The university is divided into six faculties, which together offer 200 fields of study. The faculties are those of Management, Economics and Social Sciences, Law, Medicine (with the affiliated University clinic), Arts, Mathematics and Natural Sciences and Human Sciences. 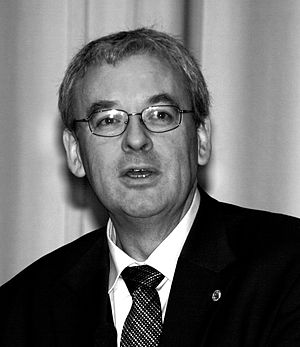 On November 24, 2004, Axel Freimuth was elected as the Rector of the University. His four-year term began on April 1, 2005. He succeeded Tassilo Küpper and is the 49th Rector since 1919. He was previously Dean of Mathematics and Natural Sciences.

The University of Cologne maintains twenty official partnerships[6] with universities from ten countries. Of these, the partnerships with Clermont-Ferrand I and Pennsylvania State are the oldest partnerships. In addition, Cologne has further cooperations[7] with more than 260 other universities. 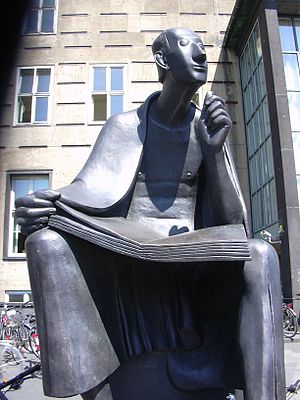 Albertus Magnus Monument in front of the main building

Over the centuries, scholars from Cologne have been among the most prominent in their fields, beginning with Albertus Magnus and his pupil Thomas Aquinas (both 13th century). Notable alumni of the 20th century include among others Kurt Alder (Nobel Prize in Chemistry 1950), Peter Grünberg (Nobel Prize in Physics 2007), Heinrich Böll (Nobel Prize for Literature), Karl Carstens (president of the Federal Republic of Germany 1979–1984), Gustav Heinemann (president of the Federal Republic of Germany 1969 to 1974), Karolos Papoulias (former president of the Hellenic Republic), and Erich Gutenberg (founder of modern German business studies).