From Infogalactic: the planetary knowledge core
(Redirected from University of Erlangen)
Jump to: navigation, search

In Germany, traditional liberal arts universities do not usually have an engineering school or department. However, FAU does have a distinct engineering faculty.

In winter semester 2014/15 around 39,085 students (including 3,556 foreign students) enrolled in the university in 239 fields of study, with about 2/3 studying at the Erlangen campus and the remaining 1/3 at the Nuremberg campus. These statistics put FAU in the list of top 10 largest universities in Germany.[3]

In 2013, 5251 students graduated from the university and 663 doctorates and 50 post-doctoral theses were registered. Moreover, FAU received 171 million Euro (2013) external funding in the same year, making it one of the strongest third-party funded universities in Germany.[3]

In 2006 and 2007, as part of the national excellence initiative, FAU was chosen by the German Research Foundation as one of the winners in the German Universities Excellence Initiative.[6] FAU is also a member of DFG (Deutsche Forschungsgemeinschaft)[7] and the Top Industrial Managers for Europe[8] network.

In Academic Ranking of World Universities for year 2014, FAU ranked second among German universities in Engineering/Technology and Computer Sciences group for all four ranking parameters TOP, FUN, HiCi and PUB.[9][10][11][12] 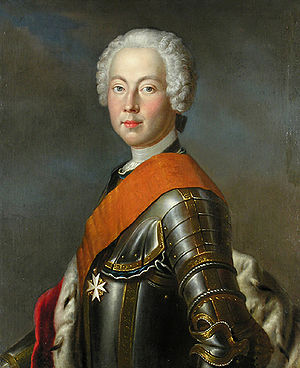 The university was founded in 1742 in Bayreuth by Frederick, Margrave of Brandenburg-Bayreuth, and moved to Erlangen in 1743. Christian Frederick Charles Alexander, Margrave of Brandenburg-Ansbach (one of the two namesakes of the institution) provided significant support to the early university. From the beginning, the university was a Protestant institution, but over time it slowly secularized. During the Nazi era, the university was one of the first that had a majority of Nazi supporters in the student council. In 1961 the business college in Nuremberg was merged with the university in Erlangen, so that now the combined institution has a physical presence in the two cities. An engineering school was inaugurated in 1966. In 1972 the school of education (normal school) in Nuremberg became part of the university. 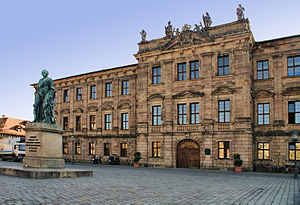 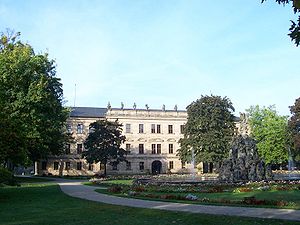 The castle in the center of Erlangen, known to many simply as the Schloss, is home to a large part of the university's administration

Below is a short timeline of FAU from its inception to its present form:

The Kollegienhaus, the historical central building and lecture hall of the University at the borders of the Schlossgarten

In February 2007 the senate of the university decided upon a restructuring into five faculties.[13] Since October 2007 the FAU consists of:[14]

The following faculties were part of the university (sorted in the order in which they were founded):

Logo of the University Hospital 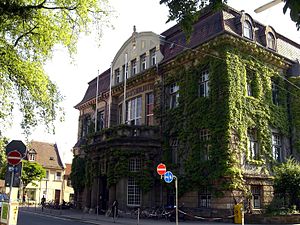 In 1962, after lengthy debate, the Bavarian parliament decided to establish a Faculty of Engineering in Erlangen. Then, the University of Erlangen thus won out against the city of Nuremberg, which, for decades, had been demanding the establishment of a college of engineering in Nuremberg. Since the expansive areas of building land required for this project were not available in the center of Erlangen, the foundations for a new university campus were laid in the south east of the town in 1964. The formal establishment of the Faculty of Engineering, then the seventh faculty at the University, took place in 1966. What was unique at the time was that the various engineering departments were subsumed, as a faculty, into the main university rather than constituting an independent university.[1][15]

The Faculty of Engineering at FAU is a young educational and research institution. Since its foundation in 1966, the Faculty has gained an outstanding national and international reputation. The Faculty boasts expertise in a range of future-oriented areas of study and research across the five departments:

The Faculty has close connections both with other natural sciences and with traditional subjects at the university. The Faculty of Engineering currently concentrates on the following research fields:

The Faculty of Engineering has a firm commitment to the unity and freedom of teaching and research as an essential precondition for scientific progress. The prioritizing of teaching and research is realized through the principle of teaching based on research, and the faculty plays a significant role in social and technological developments. Faculty promotes knowledge transfer, mobility and exchange within research and teaching in cooperation with numerous universities worldwide. Partnerships with businesses, research institutions, as well as international educational and cultural institutes are well established.

FAU claims leadership in a number of research topics. The current eight such major research areas are:[19]

The Excellence Initiative by the German federal and state governments to promote science and research at German universities aims to promote cutting-edge research and to strengthen the higher education and research in Germany to improve its international competitiveness and to make top performers in academia and science visible. As part of this initiative, FAU was awarded the contract for the Erlangen Graduate School in Advanced Optical Technologies (SAOT), which received 1.9 million euros of annual funding for the next five years. The Cluster of Excellence 'Engineering of Advanced Materials and Processes' (EAM) was also established at FAU as part of the initiative and has been approved in the second round. EAM is funded with 40 million euros.[21]

The Cluster of Excellence 'Engineering of Advanced Materials – Hierarchical Structure Formation for Functional Devices' (EAM) is the only interdisciplinary research collaboration of its type in Germany to focus on the investigation of functional materials and their processing at all length scales. The main research focus is on the fundamental and applied aspects of designing and creating novel high-performance materials. It is part of the Excellence Initiative of the German Research Foundation.

The Erlangen Graduate School in Advanced Optical Technologies (SAOT) was founded in 2006. SAOT’s scientific focus lies on optics and optical technology, two fields which are considered key technologies of the 21st century. SAOT offers an excellent interdisciplinary research environment, which is firmly grounded in a vast network of cooperations with internationally leading experts. At the Graduate School, young scientists work at the interface of a variety of disciplines such as materials science, metrology, medicine and processing technology. With their research, these young scientists make a considerable contribution to optical technologies being used to their full potential. SAOT is currently funded with seven million euros.

International Audio Laboratories Erlangen (better known as AudioLabs) is a joint institution of Fraunhofer Institute for Integrated Circuits and University of Erlangen-Nürnberg. The University provides six professorship positions to the research center and guarantees the scientific integration into the academic environment. Fraunhofer IIS will provide a budget to fund AudioLabs for an initial period of ten years. AudioLabs will benefit from Fraunhofer IIS’ extensive history and expertise in the field of audio and multimedia technologies. This close cooperation of both partners allows for a unique organization with competencies ranging from basic research and teaching to technology implementation in innovative multimedia systems.

AudioLabs is unique worldwide in both its mission and international approach. It is having a team of globally renowned scientists, those are working to shape the future of audio and multimedia technologies in the research areas such as audio coding, audio signal analysis and perceptual spatial audio signal processing.

AudioLabs is located on the premises of Fraunhofer IIS in Tennenlohe. Being in the vicinity of the Erlangen University and the Audio & Multimedia division of Fraunhofer IIS, this location enables close scientific collaboration in an ideal way. In addition, it allows for use of the modern infrastructure of Fraunhofer IIS including acoustics labs, recording studios or digital cinema labs.

Being one of the strongest and most reputable research university in Germany, FAU boasting numerous outstanding academic approaches and perspectives. Moreover, as a so-called full university, FAU brings all disciplines together under one roof. Thus, FAU offers perfect conditions for the generation of innovative ideas, which often emerge at the interface between several disciplines and span different fields of research. Therefore, FAU launched its Emerging Fields Initiative (EFI) in 2010. The EFI aims to promote outstanding, preferably interdisciplinary research projects at an early stage and in a flexible and non-bureaucratic way. In doing so, the EFI aims to enable renowned FAU researchers to put visionary ideas into practice and thus to react more quickly and more effectively to upcoming challenges.

FAU is the first German university to establish a branch campus in Busan in the Republic of Korea. FAU has contacts with approximately 500 universities all over the world, including many of the world's top universities like the University of Cambridge, Duke University, UCL, Imperial College London and many more.[33]

FAU is the first German university to establish a branch campus in Busan in the Republic of Korea. In November 2009, its campus project received approval from the Korean Ministry of Education, Science and Technology. The FAU Busan Branch Campus offers a Graduate School with a master's degree program in Chemical and Bioengineering and a research center.[36]

In 2014, the university announced its intention of working toward making the Busan-Jinhae Free Economic Zone an educational hub. To this end, FAU Busan works internationally with various companies and universities.[37]

The University of Erlangen-Nürnberg was successful within the German Universities Excellence Initiative in competing for a "cluster of excellence" and a graduate school.[42] The Cluster of Excellence 'Engineering of Advanced Materials' (EAM)" focuses on interdisciplinary developing new materials, joining engineering and natural sciences. The Erlangen Graduate School in Advanced Optical Technologies emphasizes a strong focus in optical and photonics technology in the natural sciences, in engineering and the medical sciences and aims for a concise doctoral education. It is supplemented with a Master's degree program in the same topics.

After an in-depth evaluation, both programs were extended for the third phase of the German Excellence Initiative in 2012 until 2017. They contribute significantly to the research funding of the University, including five new research buildings, permanent new technical facilities and research and teaching staff. They also aim to increase the international perception of the contributing fields of research in Erlangen.