Freiberg University of Mining and Technology

From Infogalactic: the planetary knowledge core
(Redirected from University of Freiberg)
Jump to: navigation, search 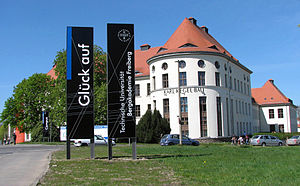 Campus of the TU Bergakademie Freiberg, 2007

Virtuhcon is a research centre at Technische Universität Bergakademie Freiberg.[2] The centre was founded within the framework of the Entrepreunerial Regions Initiative "Centres of Innovation Competence: Create Excellence - Foster Talents" from the BMBF (Federal Ministry of Education and Research) and will start working in 2009. Virtuhcon is the acronym for Virtual High Temperature Conversion Processes.

Virtuhcon focuses on basic research in the field of partial oxidation processes in industry.