The University of Geneva (official name in French Université de Genève) is a public research university located in Geneva, Switzerland. It was founded in 1559 by John Calvin, as a theological seminary and law school.[1] It remained focused on theology until the 17th century, when it became a center for Enlightenment scholarship. In 1873, it dropped its religious affiliations and became officially secular.[2] Today, the university is the second-largest university in Switzerland by number of students.[3] In 2009, the University of Geneva celebrated the 450th anniversary of its founding.[4] At least 40% of the students come from foreign countries.

UNIGE has academic research and development programs in various fields that are represented through various faculties such as:

UNIGE is a member of the League of European Research Universities (including academic institutions such as Amsterdam, Cambridge, Heidelberg, Helsinki and Milan) the Coimbra Group and the European University Association.[6]

The University of Geneva is located in several districts in the eastern part of the city and in the nearby city of Carouge (on the left bank of the Lake Léman and the Rhône), and the different buildings are sometimes very distant from each other (the Battelle buildings are for instance more than three kilometers away from the Bastions). Lectures are given in six different main locations, Les Bastions (the oldest part), Uni Dufour, Sciences I, II and III, Uni Mail and Uni Pignon, Centre Médical Universitaire (CMU), and Battelle;[7] as well as in other less important locations (for instance the Mathematics Section is located at the second and (partly) third and sixth storeys rented by the university in an office building in Carouge).[8] 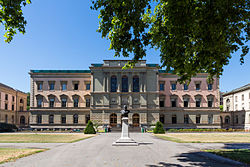 Built between 1868 and 1871, Uni Bastions is the symbol of Geneva's academic life. It located in the middle of a park and is host to the faculty of Protestant Theology and to the Faculty of Arts.[9]

Its architecture was inspired by Le Corbusier. It hosts the Rectorat and the administration of the University.[10] 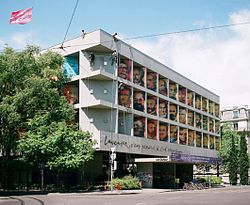 It is Switzerland's biggest building dedicated to social sciences. Uni Mail symbolizes the modernity of the University of Geneva. Its architecture is defined by a great transparency and open spaces. It currently hosts the Faculty of Law, of Economics and Social Sciences, of Psychology and Education and the Faculty of Translation and Interpretation.[11] 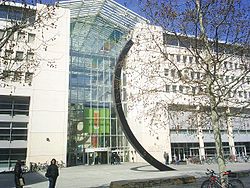 The University of Geneva is structured in various faculties which are representing teaching, research and service to society in the various disciplines.

The University is composed of nine faculties:[12] The university has a partnership with the nearby Graduate Institute of International and Development Studies and the Bossey Ecumenical Institute, and students at the university may take courses at these institutes.

Since 1981, the Faculty of Medicine is located in the buildings of CMU in Champel. The premises of CMU helped equip Fundamental Medicine of an environment conducive to the development of research, using advanced technical means and structures promoting interdepartmental interactions and synergies. To this end, the Faculty of Medicine provides its employees, but also scientists and university hospital institutions in the Lake Geneva region, twenty highly specialized technical platforms.[citation needed]

The faculty of Humanities and Arts has various departments and research centers.

GSEM is a new faculty and exists since January 2014. The creation of the GSEM faculty is a result of a merger between two former departments: Economics and HEC. Students of the GSEM Faculty benefit from a bachelor's degree in English and French which brings together the principal disciplines they need to master in a core curriculum. This new curriculum is in place since fall 2015. The GSEM counts more than 1.700 students (Bachelor and Master) and 200 lecturers. The Executive Education counts more than 1.500 participants and over 45 programs (including an Executive MBA (EMBA)and International Organizations MBA (IOMBA). A number of research institutes provide avenues for graduate studies at Master’s and Doctoral levels.

The Faculty Geneva School of Social Sciences (G3S), was founded on 1 January 2014. The Faculty of Social Sciences promotes social commitment in the sense of a more sustainable and equitable development, the reduction of social inequalities, including gender, promotion of institutions and more participatory political forms and respectful Justice and differences.

The Faculty of Social Sciences is based on several pillars - sociology, political science, geography, political economy - and recognized thematic centers of excellence - the economic and social history, gender studies, communication, socio-economics, territorial development, analysis of social and political institutions, the study of living and social vulnerability courses, the study of international relations, and citizenship. But while promoting research and advanced education in the diversity of its constituent fields, our faculty aims to become a laboratory for cross-disciplinary knowledge and articulation of the world of knowledge and the world of action.

Faculty of Psychology and School of Education

The faculty was created in 1890. It has various departments and several research centers.

Faculty of Translation and Interpretation

The University of Geneva had for 2013 a budget of CHF 558,211,000. It mostly comes from the cantonal subventions, the other notable contributors being the federal state and the tuition fees.[17] 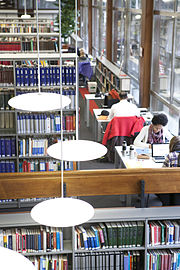 The Sciences Library at Sciences II

Uni Bastions hosts the language libraries, as well as the university's libraries focused on history and musicology.[19]

The journal de l'UNIGE is released biweekly. Its purpose is to ease communication inside the university, to inform the students about the research being carried at UNIGE, to convey new opinions and to inform students and teachers of upcoming university events via l'Agenda.[22]

Campus is released monthly with the objective to ease communication between the scientific community and the citizens and to be a "bridge between science and city".[23]

To be enrolled in a bachelor programme, one must hold a Swiss maturity diploma or a secondary diploma considered by the University of Geneva to be equivalent.[24] If the degree was not pursued in French, applicants must pass an eliminatory French language test at the beginning of September, which consists of an oral and a written comprehension test and of a piece of argumentative writing.[25] Tuition fees are of CHF 500 per semester.

During the three days before the start of the new academic year, the Journées d'accueil (Welcome Days) are organized by the University to introduce the new students to the city and the facilities, tips are also given on how to succeed at university. A second chapter including city tours, outdoor concerts and animations is also organized by the student association UniAccueil (AUA) to celebrate the new academic year.[27]

UNIGE offers more than 240 types of diplomas: about 30 bachelor's degrees,[29] 70 masters and 78 doctorates. It also provides more than 200 programmes of continuing education in various sectors.[30]

Faculty of Psychology and Education

Faculty of Translation and Interpretation

While all bachelor programs are taught in French (except in the Faculty GSEM), many master are programs are held in English, mostly in the fields of business and of science.[31]

The organizational Unit for Executive Education (lifelong learning) of the faculty is called GSEM Executive (formerly it was called HEC Executive).

UNIGE is home to six national research centers: in genetics (Frontiers in Genetics), in material sciences (MaNEP), in study of emotions (Affective Sciences), in chemical biology (with EPFL), in study of mental illness (Synaptic, with EPFL and Unil), in study of life path (with Unil). UNIGE also carries research in international studies since the creation in 2013 of the Global Studies Institute, in finance with the Geneva Finance Research Institute,[33] and in environemental studies, with the creation in 2009 of the Institut des sciences de l'environnement.[34]

Famous discoveries have been made by researcher working at UNIGE including the discoveries of extrasolar planets by Michel Mayor, of genetics by Denis Duboule, or of quantic teleportation by Nicolas Gisin.

The University of Geneva is constantly ranked one of the top universities in the world.

The QS World University Rankings [36] ranked the University of Geneva as follows:

In molecular biology, the impact of the research carried in Geneva was ranked 4th in Europe by Times Higher Education for the period 1999-2009, directly behind the University of Oxford.[38] In physics, UNIGE was ranked sixth.

The QS 2013 subject ranking placed the University of Geneva at the 21st place in the field of Pharmacy and at the 49th place in Philosophy. In every subject, the University was ranked in the world's top 200.[39] 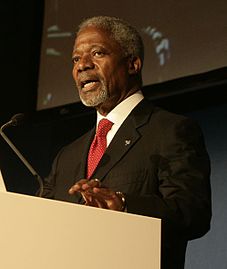 Over the course of its history, a sizeable number of UNIGE alumni have become notable in their fields, both academic, and in the wider world. Affiliates of the University of Geneva have won 10 Nobel prizes. Graduate alumni (Martin Hairer and Vaughan Jones) have won 2 Fields Medals.