From Infogalactic: the planetary knowledge core
(Redirected from University of Halle)
Jump to: navigation, search
For the American university, see Wittenberg University.

The Martin Luther University of Halle-Wittenberg (German: Martin-Luther-Universität Halle-Wittenberg), also referred to as MLU, is a public, research-oriented university in the cities of Halle and Wittenberg within Saxony-Anhalt, Germany. MLU offers German and international (English) courses leading to academic degrees such as B.A., B.Sc., M.A., M.Sc., doctoral degrees and Habilitation.

The university was created in 1817 through the merger of the University of Wittenberg (founded 1502) and the University of Halle (founded 1691). The university is named after the Protestant reformer Martin Luther, who was a professor in Wittenberg. Today, the university itself is located in Halle, while the Leucorea Foundation in Wittenberg serves as MLU’s convention centre (and hotel) for seminars as well as for academic and political conferences. Leucorea also hosts the Wittenberg Centre for Global Ethics, founded in 1998 at the initiative of Andrew Young, former US Ambassador to the United Nations, and Hans-Dietrich Genscher, former German Foreign Minister. Both Halle and Wittenberg are about one hour from Berlin via the Berlin–Halle railway, which offers Intercity-Express (ICE) trains. 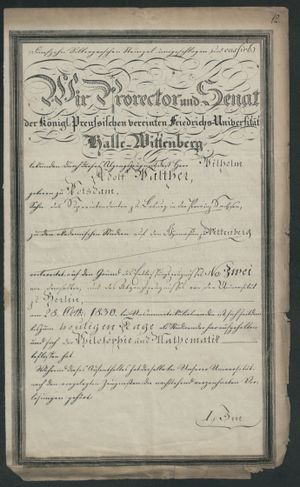 The University of Wittenberg (Universität Wittenberg) was founded in 1502 by Frederick the Wise, Elector of Saxony.[1] Under the influence of Philipp Melanchthon, building on the works of Martin Luther, the university became a centre of the Protestant Reformation, even incorporating, at one point in time, Luther's house in Wittenberg, the Lutherhaus, as part of the campus. Notable attendees include George Müller, Georg Joachim Rheticus and – in fiction – William Shakespeare's Prince Hamlet and Horatio and Christopher Marlowe's Doctor Faustus.

The University of Halle (Universität Halle) was founded in 1694 by Frederick III, Elector of Brandenburg, who became Frederick I, King in Prussia, in 1701.

In the late 17th century and early 18th century, Halle became a centre for Pietism within Prussia. 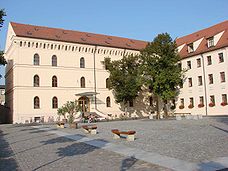 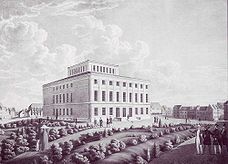 In the 17th and 18th centuries the universities were centers of the German Enlightenment. Christian Wolff was an important proponent of rationalism. He influenced many German scholars, such as Immanuel Kant. Christian Thomasius was at the same time the first philosopher in Germany to hold his lectures not in Latin, but German. He contributed to a rational programme in philosophy but also tried to establish a more common-sense point of view, which was aimed against the unquestioned superiority of aristocracy and theology.

The institutionalisation of the local language (German) as the language of instruction, the prioritisation of rationalism over religious orthodoxy, new modes of teaching, and the ceding of control over their work to the professors themselves, were among various innovations which characterised the University of Halle, and have led to its being referred to as the first "modern" university, whose liberalism was adopted by the University of Göttingen about a generation later, and subsequently by other German and then most North American universities.[1]

More than a dozen professors were expelled. Others were shifted to Halle-Wittenberg from universities regarded as "better" at the time, which led to the university being called an academic Vorkuta – after the largest center of the Gulag camps in European Russia).

Following the continental European academic tradition, MLU has 9 faculties, regrouping academic staff and students according to their field of studies (as opposed to the Anglo-Saxon collegiate university model): 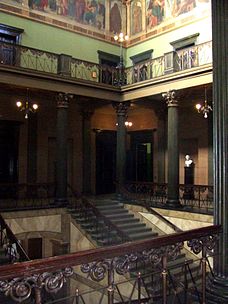 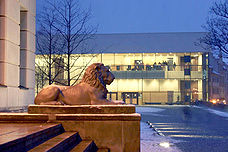 Central lecture hall ("Auditorium Maximum", in the background) and entry of Lions' Hall (in the front). 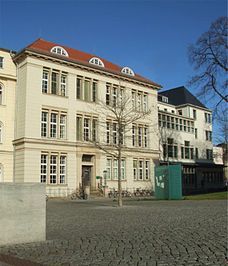 MLU is enclosed by a variety of research institutions, which have either institutional or personal links with the university or cooperate occasionally in their respective fields of studies:

Even though MLU is an academic, research oriented institution, not an academy of music or conservatory, the university has an academic orchestra, founded in 1779, and a rather prestigious[2] choir, founded in 1950, which together constitute the so-called Collegium musicum. Members are mostly gifted students of all faculties, but also academic staff and alumni. The university choir regularly performs at the international Handel Festival in George Frideric Handel’s birthplace, Halle.

MLU has many international partner universities, including: 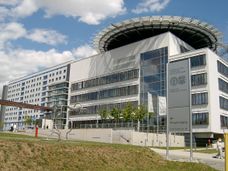 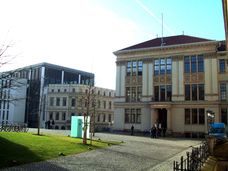 Melanchthoneanum (on the right) and faculty of law (on the left).
File:Frauen 060 Pf Dorothea Erxleben.png
Dorothea Erxleben, the first female medical doctor in Germany.[3]

Given the history[4] and reputation[5] of the Martin Luther University of Halle-Wittenberg, numerous notable personalities attended the institution, such as Nobel laureates Emil Adolf von Behring, Gustav Ludwig Hertz, Hermann Staudinger and Karl Ziegler, as well as Anton Wilhelm Amo (the first colored Sub-Saharan African known to have attended a European university), Dorothea Erxleben (the first female medical doctor in Germany), Henry Melchior Muhlenberg, the Patriarch of the Lutheran Church in America, and his son, Frederick Muhlenberg (the first Speaker of the House of Representatives of the United States), Hans Dietrich Genscher (Germany’s longest serving Foreign Minister and Vice Chancellor), and: