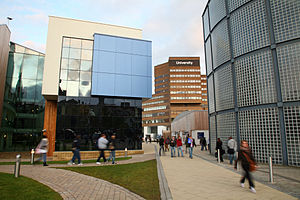 A View of Queensgate Campus

The university traces its roots back to a Science and Mechanic Institute founded in 1825.[3] Some 19th century students earned qualifications as external students of the University of London.[4]

The archives of all the university's predecessors are held in the Archives and Special Collections department at the university.[7]

The university is a founding member of the Northern Consortium and a member of the Yorkshire Universities. The Vice-Chancellor, Professor Bob Cryan, previously sat as chair of this regional Higher Education association. 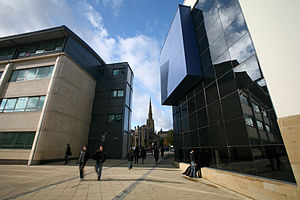 The university's main campus, Queensgate, is south-east of Huddersfield town centre. Over £100 million has been invested in the campus and its resources over the last 10 years. After £1 million renovation work, the Student Centre was formally opened in November 2007 by Chancellor, Sir Patrick Stewart. The centre enables students to access a range of support services (computing, library, careers, welfare support) in a single location. The four floors of the library were refurbished from 2008 to 2009.

A £4 million students' union building was opened in 2005 with a variety of social, leisure and retail facilities. New drama facilities were opened in the refurbished Milton building, in 2005.

A Creative Arts Building, designed by Darnton EGS, was completed in 2008. It has a recital hall, electro-acoustic research studio, new art and design studios and live recording facilities. The Queen and the Duke of Edinburgh visited the university in May 2007 to unveil the foundation stone of the new building.[8]

A new £16 million business school opened to students in September 2010.[9] The 3M Buckley Innovation Centre opened for business in 2012.

University Campus Barnsley, located in Barnsley, South Yorkshire, opened in 2005. The campus offers facilities for subjects such as music, art and design, journalism and media production. £5.5 million has been invested with the help of the Higher Education Funding Council for England, Yorkshire Forward and Objective 1.

From August 2013 University Campus Barnsley (UCB) has been managed by Barnsley College. UCB programmes starting in September 2013 will continue to be validated by the university, and will lead to a University of Huddersfield award.

The International Study Centre (ISC) at the university offers degree preparation courses for international students. The programmes are run by Study Group. The ISC is located on the university’s main Queensgate campus. Students can mix with others and also have access to the library and other specialist IT facilities.[11] 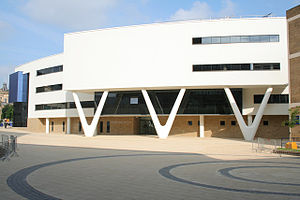 In July 2013, Prince Andrew became the Patron of the University.[13]

The university is organised into the following academic schools: 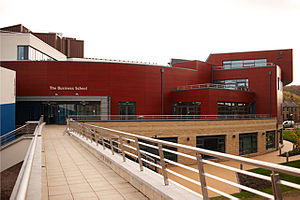 The university is focused on strengthening and enhancing its research facility; the institution has invested nearly £1.4 million in information provision in 2008/09.[citation needed] A further £2.75 million was invested in computing resources.[citation needed]

During 2008/09 there was further significant investment in facilities and equipment, including a new Creative Arts Building opened in September 2008, with a recital hall, electro-acoustic research studio, new art and design studios and live recording facilities.

A £228,000 Nanoform 250 Ultragrind machining centre was used to investigate nano-material removal and to support research activity within the centre for precision technologies in the School of Computing and Engineering.[citation needed]

A £160,000 single crystal x-ray diffractometer which uses x-rays to provide the three-dimensional structure of chemical compounds. This is being used by researchers in the university’s chemistry department.[citation needed]

A new business school building, which represents an investment of over £16 million was opened in September 2010. The building will provide improved facilities including a mock court room and ‘The Street’ – a contemporary social space overlooking a central courtyard. The building has been designed to be energy efficient, incorporating energy saving technology.[citation needed]

The Storthes Hall Park Student Village and Ashenhurst Student Houses are the university affiliated accommodation. These residences are privately owned and operated by Digs Student, independently of the university.

Storthes Hall is situated in a parkland to the south of the town with 1,386 en-suite single, double or disabled bedrooms in shared flats of six to eight students.

Ashenhurst Houses are located in woodlands close to the campus and Storthes Hall Park. There are 280 single bedrooms in shared houses of six to eight students, all with shared facilities including a communal lounge and kitchen/dining area.

The majority of students move away from Storthes Hall and Ashenhurst after living there in their first year at the university due to the distance from the town centre/university and the Halls of Residence feel they have to them.

The Students' Union represents, supports and advises students on all aspects of their time at university.

Services include Student Activities – sports clubs and societies, the Give it a Go scheme, one-off events and Student Media (RadioHud and T’HUD Magazine); Volunteering – providing opportunities to help support the local community or national charitable organisations; Representation – making sure the Students’ Union is a member-led organisation; the Advice Centre – offers confidential and impartial support on any welfare, financial or academic issues; and last but not least the SU Shop – providing day-to-day essentials in the centre of campus.[citation needed]

Information on all SU services can be found on www.huddersfield.su.[14]

Huddersfield was ranked joint first out of all Yorkshire universities for high quality staff and lectures in the opinion panel research survey in 2007.[citation needed] The university achieved the highest ranking of any mainstream university in the United Kingdom for assessment and feedback in the 2011 survey[21]

The Sunday Times Good University Guide, ranked the university 64th out of 122 in 2013.

The university rose 63 places to 8th in the 2008 People & Planet Green League, representing the highest rise by any university.[24] Despite a standing of 71st in 2007 it achieved the second lowest CO2 emission rate of any university in the UK,[25] The rise to 8th in the UK was attributed to existing green activity, including the use of canal water in cooling systems and the continued low carbon emissions (13% lower than 2007), as well as new foci such as a push for improved levels of recycling and the introduction of rain water harvesting.[26] In the 2009 Green League the university achieved 18th position and thus, despite slipping ten places, maintained its rating as first class for environmental performance.[27] In 2010, the university had risen back into the top 10.[28]

The university was the Entrepreneurial University of the Year at the THE awards 2012.[29]

The university was the winner of the Outstanding Registry Team 2013 at the THE Leadership and Management awards 2013.[30]

The university was University of the Year at the THE awards 2013.[31]

In 2014 the university was named the Times Higher Education's (THE) Best University Workplace.[32]

The university was the New University of the Year at the Educate North Awards 2015.