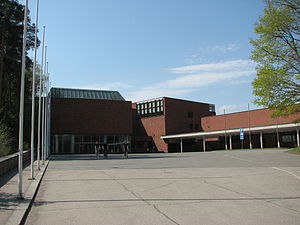 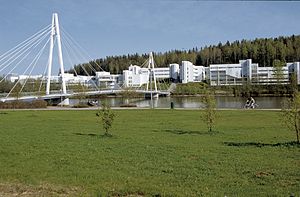 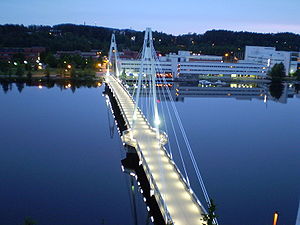 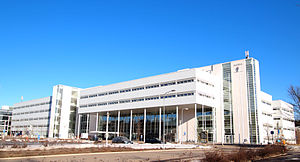 Agora building at the Mattilanniemi campus 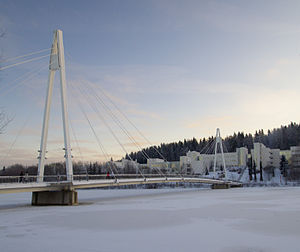 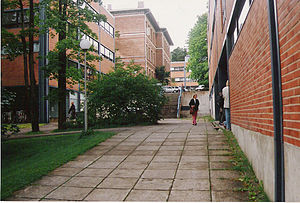 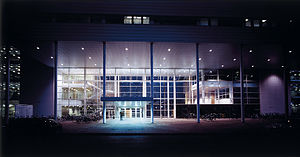 The University of Jyväskylä (Finnish: Jyväskylän yliopisto) is a university in Jyväskylä, Finland. It has its origins in the first Finnish-speaking teacher training college (the so-called Teacher Seminary), founded in 1863. Around 15,000 students are currently enrolled in the degree programs of the university.[1] It is ranked as the second largest university in Finland when measured according to the number of master's degrees conferred.

Founded in 1863, the university has its origins in the first Finnish-speaking teacher training college, the so-called Teacher Seminary. The teacher seminary evolved into the College of Education in 1937, at which time it was given the authority to grant doctorate degrees. In the 1960s, the college started teaching and researching in the sciences and in 1967 was renamed the University of Jyväskylä.[citation needed]

The university offers a wide range of study programmes for bachelor's or master's degree conducted in English, many of which are unique in Finland. Natural Sciences, Human Sciences, Sport and Health Sciences as well as Teacher Education are the university's areas of special expertise.

The University has 15,000 students in addition to its adult education students, representing 40,000 students in total. Each year about two thousand new students are admitted and generally only a seventh of applicants are accepted; this makes University of Jyväskylä one of the most popular universities in Finland. Measured according to the number of master's degrees conferred, the University of Jyväskylä is ranked as the second largest university in Finland.

The university is currently divided into seven faculties:

Centres of Excellence in Research nominated by the Academy of Finland:

The University of Jyväskylä aims to offer its students the opportunity to study abroad and internationalisation at home. Therefore, the University of Jyväskylä is active in a variety of international programmes, such as the Lifelong Learning Programme, Nordplus, North-South-South Higher Education Exchange, FIRST and ISEP. The University has also concluded bilateral agreements on student exchange with 25 universities around the world. Altogether, the University is involved in student exchanges with more than 360 universities worldwide. 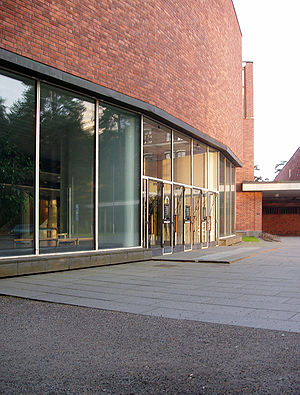 The faculties and departments are mainly located on three campuses: the Main Campus area in the city centre - where the original Teacher Seminary has first started - as well as Mattilanniemi and Ylistönrinne Campuses on opposite shores of Lake Jyväsjärvi, united by a bridge, some 10 minutes walk from the Main Campus area.

Several buildings in the main campus area were designed by famous Finnish architect Alvar Aalto. Aalto received the commission to design the College of Education campus following a competition held in 1951. Aalto played on the idea of Jyväskylä's image among the town's inhabitants as it being the "Athens of the North", and layout of the campus reflects principles of Greek acropolis layouts. His scheme even included a Greek-style open-air theatre, though executed in minimal form.

Buildings in the campus area designed by Alvar Aalto:

In 1969-70 an architectural competition was arranged for the design of new university campus sites at Mattilanniemi and Ylistönrinne. The competition was won by architect Arto Sipinen, who had previously worked in Aalto's office. Sipinen also designed new buildings for the main campus, including a new main library (1974).

Other institutes within the university include:

Kortepohja Student Village is owned by the Student Union of the University of Jyväskylä. Kortepohja, located about 2.5 kilometres from the Main Campus and city centre, housing approximately 1900 students.

KOAS offers ca. 3900 apartments all around the Jyväskylä town area. The apartment buildings are conveniently located in the suburbs of Jyväskylä.

Media related to University of Jyväskylä at Wikimedia Commons