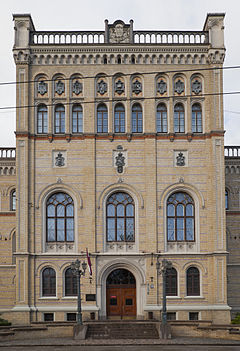 University of Latvia (LU) (Latvian: Latvijas Universitāte) is a state-run university located in Riga, Latvia. It was established in 1919. 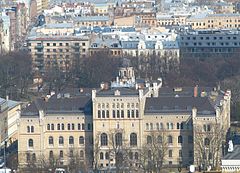 The University of Latvia, named at that time "Higher School of Latvia" (Latvian: Latvijas Augstskola) was founded on September 28, 1919 on the basis of the former Riga Polytechnic (founded in 1862). The first rector of the university was chemist Paul Walden. In 1923, this school received its now resumed name – the University of Latvia (Universitas Latviensis).

In the period between 1919 and 1940, the University of Latvia was the greatest center of higher education, science and culture in Latvia. The former building of the Riga Polytechnic on Raiņa bulvāris 19 serves as the university's main building.

With Latvia regaining independence, the Supreme Council of the Republic of Latvia reconfirmed the Constitution of the University of Latvia on September 18, 1991. It stated that the Higher School is "a state establishment of academic education, science and culture which serves the needs of Latvia and people".[3] Alongside the Constitution, the flag, the hymn, the University's emblem, the Rector's chain, and the official garments for the Rector, Vice-Rector and deans were renewed as attributes of the University of Latvia.

The EuroFaculty, created by the CBSS to support reforms at the universities in Tartu, Riga, and Vilnius, was organized with its headquarters at the University of Latvia, 1993–2005.[4]

The University of Latvia offers undergraduate, graduate, and doctoral levels of study and in October 2014 more than 14,000 students, including PhD and exchange students, had enrolled in various study programs.[5] Almost one third of them studied in business and economics related programs. 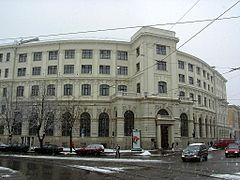 Faculty of Economics and Management

The university consists of 13 faculties:

In addition to the university's various faculties and its medical wing, the Riga Medical College (Rīgas Medicīnas koledža), the University of Latvia offers most of the resources traditionally associated with accredited universities, including several libraries, research facilities, study centers, a language school, and a career center.[6]

Institute of Mathematics and Computer Science

The Institute of Mathematics and Computer Science (IMCS) was founded in 1959 as a computer research centre, now consisting of about 200 researchers, assistants, engineers, and software developers.

The university has a number of amateur choirs, orchestras and dance groups, as well as a student theater.