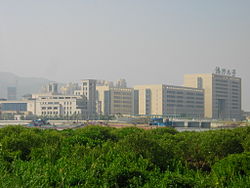 The University of Macau

The University of Macau (abbreviation: UM, Portuguese: Universidade de Macau, Chinese: 澳門大學) is the only public comprehensive university located in Macau, being the leading tertiary institution of the city which has excellence in teaching, research and service to the community. Founded in 1981, it is the oldest higher educational institution in Macau, as well as the largest university in the city in terms of faculty size and programmes offered.

The university's campus is located in Taipa. It is organised into seven academic faculties and eight residential colleges. The main medium of instruction is English, while certain courses are taught in Chinese, Portuguese and Japanese.

The university has been relocated to the new campus since August 2014 at Hengqin, Zhuhai, Guangdong but continues to operate under Macau SAR jurisdiction.

University of Macau's predecessor is the privately owned University of East Asia which was established in 1981. The university started with undergraduate programmes which followed the academic structure of British universities with three years of study. English was the main medium of instruction and the majority of the students were from Hong Kong. In 1984, the university graduated its first students and awarded the honorary doctorates for the first time. 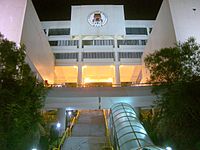 Old campus of the University of Macau

In 1988, the Portuguese Macau government entrusted the Macau Foundation to acquire the university. The undergraduate programmes were expanded to four-year programmes which followed the academic structure of Portuguese universities in 1990, while English remained the main medium of instruction. In 1991, a new university charter was put in place, the university became a public university and was renamed as University of Macau. The student enrollment rose to about 3,000 and the percentage of local students rose to above 80% just before the Macau's handover. The first master's degree students graduated in 1995 and the first doctoral degree student graduated in 1997.

UM undertakes as its prime mission the advancement of scholarship and education in the realms of humanities, social sciences, business, law, natural sciences, engineering, health sciences, education and other areas.

The emblem of the University of Macau (UM) features a five-towered crest encircled by golden rings and the name of the university in Chinese and Portuguese.

The logo of the UM consists of two parts: the emblem and the university’s name in Chinese (澳門大學), Portuguese (Universidade de Macau) and English (University of Macau) with assigned colours.

The Faculty has various facilities devoted to student development, including Language Labs where students practice simultaneous translation and machine-aided translation or perfect their skills in Portuguese, Spanish, German, Japanese or French. A black box theatre hosts various drama productions within the Faculty. [14]

[15] The Faculty of Business Administration is the largest faculty in the university. The medium of instruction for courses offered in the faculty is English. It offers several business programmes through its four departments: Department of Accounting and Information Management, Department of Finance and Business Economics, Department of Management and Marketing, and Hospitality and Gaming Management Program.

The Faculty of Health Sciences is a newly established faculty which concentrates on the fields of life sciences and medicine.

The Faculty of Law offers bachelor’s, master’s, doctoral and postgraduate certificate programmes in the Chinese, Portuguese and English languages. The bachelor’s programmes is to prepare jurists who are familiar with Macau SAR legal system; the master’s and doctoral Programmes purport to educate knowledgeable and qualified legal professional jurists who are competent to conduct theoretical research and teaching in Macau Law, Comparative Law, European Law, International Law and International Business Law. The teaching system of the Faculty basically follows the Roman-German regime with strict standards in teaching style, student recruitment and examination. The faculty members consist of legal experts from Macau, Mainland China, Portugal, Austria, Italy, Brazil, Belgium, India and other countries.

Faculty of Science and Technology

There are various kinds of enriched laboratories for teaching and research purposes in various science and engineering fields.

The Institute of Chinese Medical Sciences (ICMS) was established as the first research-oriented institute in Macau in 2002.

Asia-Pacific Academy of Economics and Management

The University of Macau Wu Yee Sun Library is the largest library in Macau. It is a 7 storeys building that has a floor area of 32,000 square metres and a seating capacity of approximately 3,000. The print collection includes 600,000 volumes of monographs, 6,000 periodical titles, and 13,000 volumes of old Chinese editions.

The university has been relocated to the new campus in August 2014.